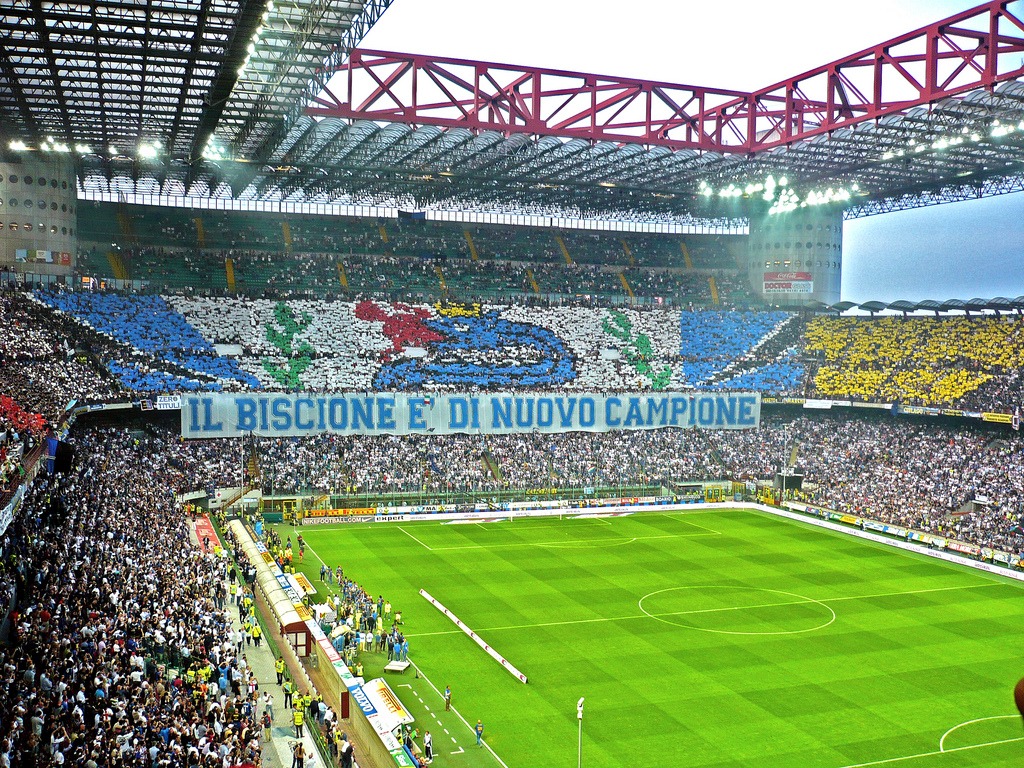 The sports tourism sector is a significant string to the bow of many cities around the world, although Milan, a jewel in the crown of Italy’s global appeal, might just be the most enticing destination on the planet for football fans. The city, a beacon for fashionistas and foodies, is the home of two of Italy’s most prestigious clubs: AC Milan and Inter Milan. Both call the legendary San Siro their home, a stadium flooded with the rich, controversial history of calcio, Italian football.

Ground was broken on the grounds of the San Siro in the December of 1925. Within ten months, the San Siro’s construction had been completed, and the stadium was ready to host its inaugural match: a 6-3 thriller between Inter and Milan. Milan enjoyed sole occupancy of the stadium for the first twenty years of its existence, their cross-city rivals remained at the neoclassical Arena Civica until 1947, but it was after the San Siro came to host both clubs that the stadium truly came to live.

In its modern carnation, the San Siro is owned by the Municipality government and can hold a maximum of 80,018 spectators. The Stadio Giuseppe Meazza, as it is officially known, is rated as a four-star arena by UEFA – football’s European governing body – and is recognised by football fans around the world as one of the most iconic stadiums on the planet.

Like the Maracanã, Camp Nou or Westfalenstadion, the San Siro has provided the backdrop to some of the most graceful – and graceless – players Italy has ever produced. In 2010, Jose Mourinho led a resolute Inter side to a historic treble: it was peak Mourinho, but it was also peak Inter – and, by extension, Milan.

Italian football culture is renowned for its dedication to defence and the dark-arts. Italy is a nation with a genuine philosophy. Catenaccio – the true Italian style – demands the use of man-to-man marking, a five-player defence and the implementation of a ball-playing sweeper, a libero.

Milan is a city with serious sporting pedigree, and an astonishing stadium

Between them, the Milan clubs have won 36 Serie A titles, 13 Copa Italias and 10 European Cups. Although both clubs have been in decline for the best part of a decade, Milan is a city with serious sporting pedigree, and an astonishing stadium.

The San Sirio – famed for its curling stairwells, steep terraces and patchwork roof – is entering its final run. In 2019, the Milan clubs announced their intention to build a new stadium to replace their legendary home. The new 60,000 capacity stadium, which will be built on the ground next to the San Siro, is expected to be ready for the 2022-23 season.

I am desperate to see a match at the San Siro before it closes its door for the final time. Italian football is famed for its fan culture – a reputation that is far from unblemished by controversy – and the San Siro is a vital part of that. The San Siro’s pre-match tifo displays are breath-taking; its atmosphere rambunctious.

Let’s not forget, the San Siro – one of Europe’s largest stadiums – is situated in Milan, a city with so many riches to other. A bastion of culture, the home of an array of traditional and contemporary cuisines, and just about everything in between, Milan will once again be the place to be once the disruption caused by the COVID-19 pandemic dissipates.

As a West Ham fan, I know all too well the pain of watching a stadium be dismantled brick-by-brick. Unlike Upton Park, the San Siro has provided the backdrop to some truly legendary moments – memories cherished by people all over the world; not just a small corner of London’s East End.

There aren’t many things on my bucket-list; the San Siro is. Once the worlds of sport and travel return to a level of normality, I’ll book my flights, buy my tickets, purchase a vintage Beckham jersey and make my way to a match at the San Siro. Italy has so much to offer, Milan’s sporting heritage is just one such example.