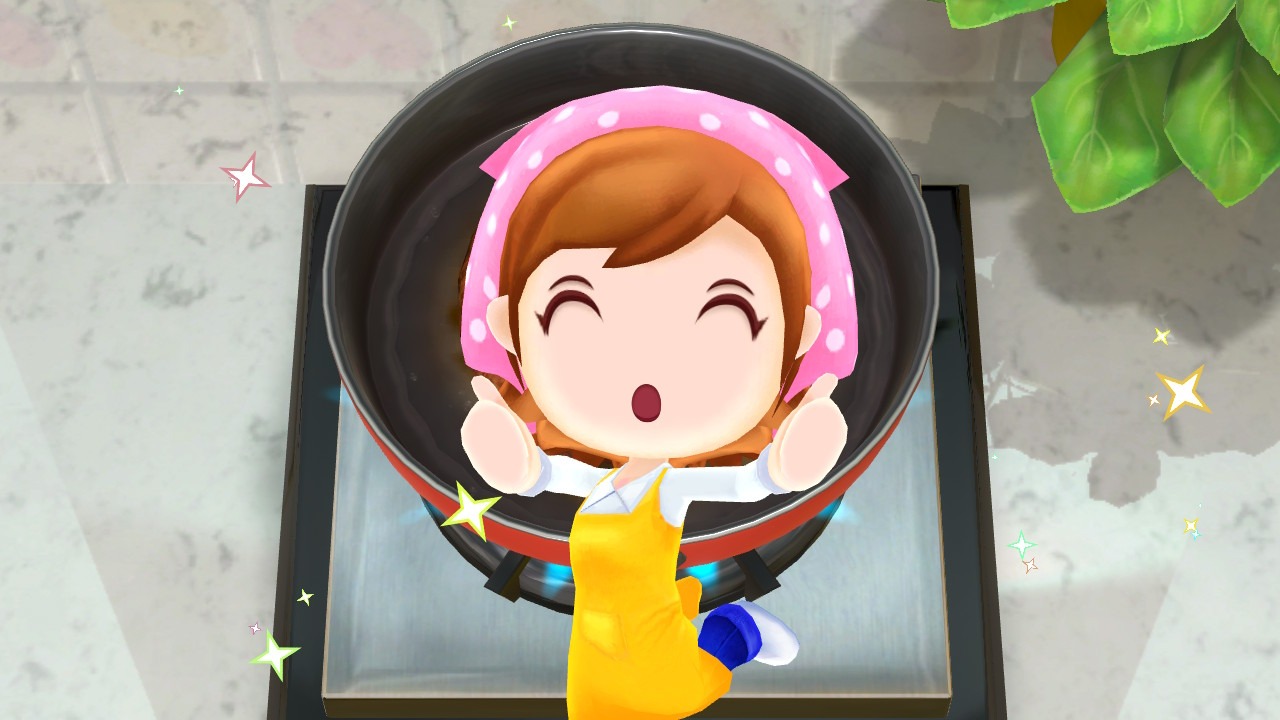 It’s not often that a series as seemingly innocent as the Cooking Mama franchise hits the headlines, yet it has been embroiled in a debunked cryptocurrency-mining scandal and legal dispute that has seen the game pulled from the digital store. Fortunately, before the game was recalled, I managed to get my hands on one of the physical copies that sneaked out, so I can give you some thoughts on this most illicit of games. Sadly, despite a few tweaks to the established recipe, Cookstar isn’t that enjoyable a game. It may be off the shelves currently, but I see no reason to hurry it back anytime soon.

Cookstar boasts no real differences to the other games in the Cooking Mama franchise in terms of gameplay. The eponymous Mama guides you through a recipe, and you complete all the steps (in the form of little challenges) to make that particular dish. Each challenge gets a three-star rating based on the quality of your performance and, if you get at least two stars for the entire dish, you’ll unlock a ‘Cookstar’ version of that dish. It’s exactly the same process, but there are no on-screen prompts reminding you what to do. Completing recipes also unlocks more recipes, of which there are 80 on offer. Past that, there’s not very much to keep you occupied. If you’ve played one Cooking Mama game, don’t expect anything radically different.

For all of Cooking Mama’s kitchen talent, this game is far too underdone to be palatable for gamers

I’ll be honest–I haven’t played a Cooking Mama game since the DS, meaning I missed all the Wii instalments that (I’m told) had somewhat dodgy motion controls. The situation isn’t any better on the Switch. I really struggled in some of the games because Cookstar simply wasn’t picking up my movements. It’s really frustrating to play a game that doesn’t realise you’re playing half the time. It should be some degree of a challenge to get the three stars on each recipe, but it more often felt like blind luck. None of the challenges are even that tough–they normally only take a few seconds, and there’s very few of them. Worse, there are mandatory control schemes whether you’re playing in handheld or docked mode, meaning you don’t even have the choice if you prefer motion or joystick controls.

There are some new additions, which premier with mixed success. There’s a Vegetarian mode for those who want to try to be meat-free in the digital kitchen, and it’s a nice addition that feels inclusive. The co-op mode pits you against a friend, but there are few challenges and no real incentive to try them. The most interesting addition is the newly added ‘Cookstar’ feature, in which you cook food and share it online to gain attention (this links to Twitter too, if you’re really that proud of a dish’s success), but it doesn’t go that far. Like much of the game, it’s superficial charm that screams of missed potential.

Cooking Mama: Cookstar is a weird instalment in the franchise as, even with an increased amount of content, it still feels like an empty game that is really lacking in polish. Certain elements are fun the first time around, but it’s too often a frustrating experience that offers really very little. Pick up one of the older games, back when Cooking Mama was fun and fresh, and if you happen across a copy of this latest entry, steer clear of it. Ironically, for all of Cooking Mama’s kitchen talent, this game is far too underdone to be palatable for gamers.