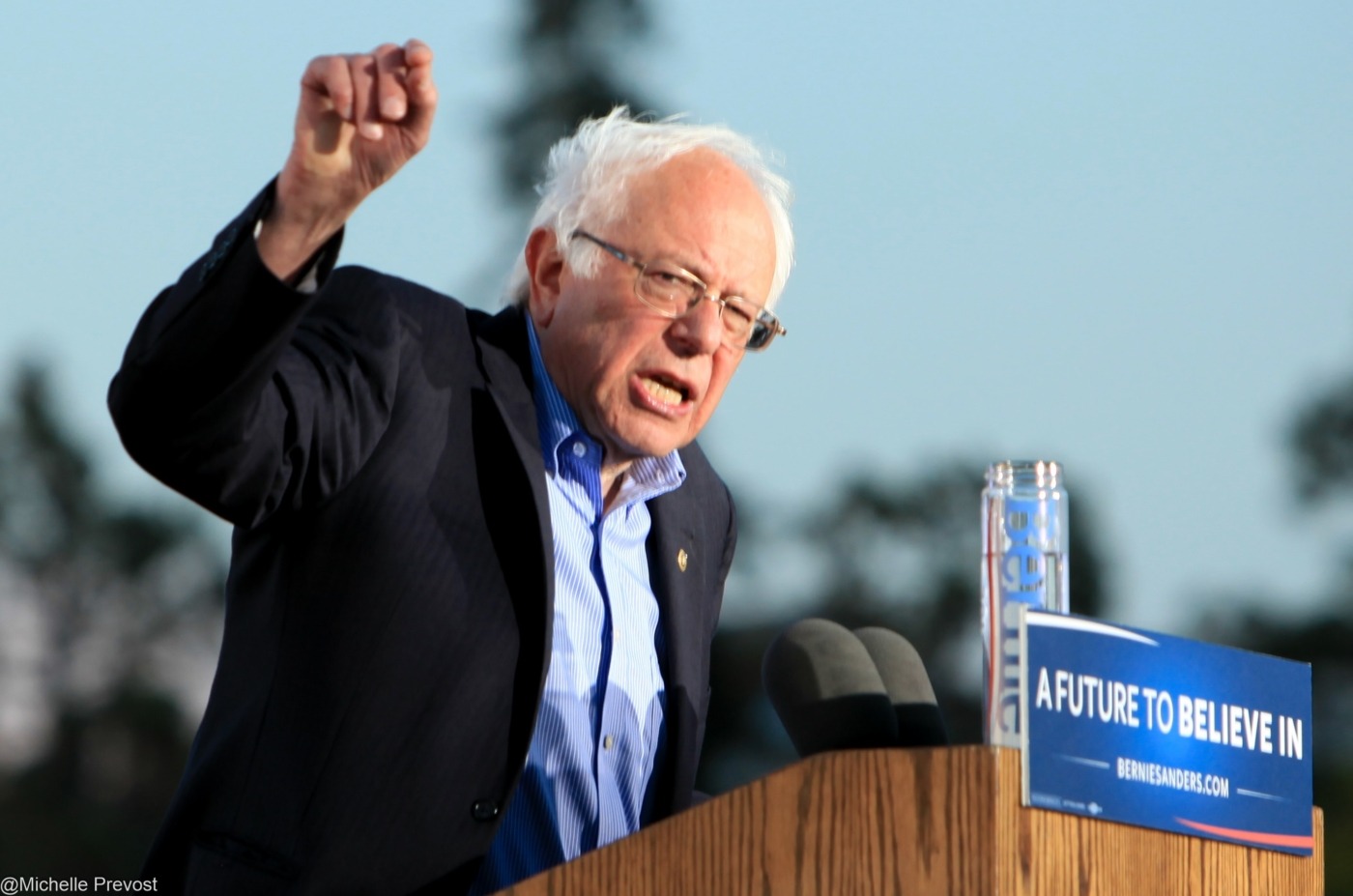 On the back of significant losses during primaries to Joe Biden, namely in South Carolina at the end of February, and in crucial states such as Michigan and Florida in March, we were all made aware on the 8th April of Bernie Sanders’ decision to withdraw from the U.S. Presidential race.

Not only do these circumstances lend themselves to an assessment of Sanders’ contribution to U.S. politics at large, but the resultant criticism of Joe Biden which points to Sanders’ impact, makes such an assessment even more timely.

Arguments began to arise suggesting that Biden triumphed over Sanders not because of any of his own actions that warranted particular credit, but instead because of fears among the electorate that his opponent was too far to the ‘left’.

Sanders being seen as a ‘political outlier’ became a source of concern for some, because of worries that this would potentially alienate the more moderate Democrat supporters. The possibility of Sanders also potentially being an easy target for Trump’s rhetoric was also a fear.

Sanders being seen as a political outlier became a source of concern for some, because of worries that this would potentially alienate the more moderate Democrat supporters.

Sanders’ impact on Biden’s campaign in this way draws attention to the undoubtedly large degree of impact that he has more broadly on the U.S. political scene.

What remains more uncertain is the nature of this impact. In order to assess this, one must start by looking at Sanders’ policy pledges.

Sanders’ pledge to spend $16.3 trillion on a ‘Green New Deal’ to protect the climate, which would also create 20 million new jobs, is particularly illustrative. The comprehensiveness of his goals as can be seen here, by attempting to tackle both environmental issues and economic inequalities to the fullest, demonstrates Sanders’ interventionist intentions that play into his broader ethos of progress and recovery. Pledges to double the federal minimum wage, a desire to work towards free college education, and the provision of government run health insurance, “Medicare for all”, further depict such intentions.

By attempting to tackle both environmental issues and economic inequalities to the fullest, Sanders demonstrates his interventionist intentions that play into his broader ethos of progress and recovery.

Whilst Sanders didn’t remain in the race long enough to be given the chance to enact such policies, the levels of intensity with which he raised awareness about key issues and tried to remedy them, has led to him sparking the necessary discussions that were too often overlooked.

Indeed, Biden’s recent reassurance to Sanders’ supporters that he “[understands] the urgency of what it is” that has to be done in the U.S., reflects how Sanders’ policy ideas will endure, with them having to be considered in this way, if Biden is to count on this support base.

Furthermore, Sanders’ decision to remain on the ballot paper in states that still hadn’t held their primaries, to gather delegates and to be in a better position to influence the party’s campaign in later stages of the race, also suggests the continued impact that Sanders’ policies will have.

Not only are Sanders’ signature policy proposals crucial, but he also appears to have positively impacted the electoral process.

Faiz Shakir, the Sanders campaign manager, previously noted the role of Sanders in “[expanding] the base” of supporters. Indeed, Sanders’ policy choices have helped to engage increased numbers of younger voters and working people. Although we now speak in an entirely different political landscape, it is this expansion of ‘the base’ that will likely endure. Afterall, Biden has spoken of how he will “be reaching out” to Sanders’ support base. This will ultimately mean a more representative voting body, all as a result of Sanders’ initial groundwork.

Secondly, Sanders has often spoken about the issue of campaign funding; denouncing how both congressional parties are beholden to corporate funds. In the race, Sanders instead prided himself on his 1.4 million individual donors as opposed to billionaire funded Super PACS, (Political Action Committees) who often fund campaigns in turn for loyalty. Thus, Sanders has started to raise questions about how campaigns are and should be conducted.

Conversely, others have argued that Sanders’ impact has not been as positive in its nature.

Sanders has been criticised for notable contradictions. Indeed, despite passionate arguments, Sanders has previously come under criticism for his own not-for-profit organisation ‘Our Revolution’. Many have suggested that this could be equivalent to a Super PAC, with it being unknown who the financial donors that supported ‘Our Revolution’ are.

In addition to contradictory ideas, Sanders’ policies have often been deemed as unrealistic. New York Times columnist, David Brooks, exemplifies this when noting how Sanders claims to be importing the high-quality Scandinavian model of welfare when defining his provisional healthcare policy. Yet, as Brooks acknowledges, unlike Sanders and his plans for America, Scandinavians “can afford [this] because they understand how free market capitalism works, with fewer regulations on business creation and free trade”.

Sanders’ policies have often been deemed as unrealistic.

Here, Brooks taps into a larger issue surrounding Sanders’ reoccurring fanciful ideas. The plethora of well-meaning but expensive policies that have been put forward by Sanders raise concerns, as depicted through this example. Whilst Sanders has spoken of tax increases, his desires to restrict the powers of Trans-National Corporations and his veering towards protectionist economic policies, have led to these doubts about whether such policies would be affordable enough to actually materialise.

Similar concerns are also apparent with such policies as Sanders’ pledge to provide free college education. Again, issues such as affordability have been raised with further questions being posed around necessity. The necessity of his promise to pay off the student loans of those from wealthier families in addition to those that struggle financially, has been contested.

In order to fully assess the nature of Sanders’ impact, we must also look beyond policy proposals and electoral process influence and turn to him as a ‘character’.

Sanders’ wife, Jane O’Meara, once said that if her husband owned “seven sweaters, that’s three too many for him”. This cogently sums up how, when Sanders is concerned, his appeal is not only in his ideas, but also in the way that he ‘does’ politics.

As we have repeatedly seen, Sanders does not seem to be one to indulge in excess. He has previously defended his relaxed approach to his own personal style when probed by journalists, noting how the media care more about his hair, “than the fact that [the U.S. is] the only major country on earth that doesn’t guarantee healthcare to all people.” This demonstrates how his carefree appearance is bound up with his desire to occupy himself with ideological commitment and rigour to as high a degree as possible, not being afraid to overlook superficial things like personal style in the process.

His carefree appearance is bound up with his desire to occupy himself with ideological commitment and rigour to as high a degree as possible.

Even back in 2016, a bird landed on Sanders’ podium during a rally and he claimed that it was a dove symbolising desires for world peace. This seems part of the same, Sanders taking every opportunity possible to demonstrate his commitment to an ideological orthodoxy that he believes is paramount.

It is certainly true that if Sanders had made it to the White House, his policies would have needed significant revision, with clear contradictions during his campaign also needing to be addressed.

However, when considering Sanders in the aftermath of his withdrawal, it is hard to escape the good that he has done and continues to do. As commentator Elizabeth Bruenig notes, Sanders never failed to be notoriously blunt, not compromising on his ideas to ever adhere to ‘sycophantic politics’. Such can be seen in his commentary on the 2008 financial crisis and the subsequent environment during the Obama administration. Sanders acknowledges how the fallout of the recession still continues to damage the life of the average American. This lies in stark contrast to Biden’s more ignorant portrayal of life under the Obama administration during recession fallout as being the ‘norm’ that should be strived for in current times.  Crucially, whilst Bruenig suggests that this bluntness made Sanders “an awkward fit for Washington” she also notes that in the same vein this also “built him a movement.”

When considering Sanders in the aftermath of his withdrawal, it is hard to escape the good that he has done and continues to do.

Sanders is valued now as the maverick rather than the implementor. His value now comes in continuing to ignite crucial debates about issues in U.S. society but also in the example he has set of what should drive a political leader.