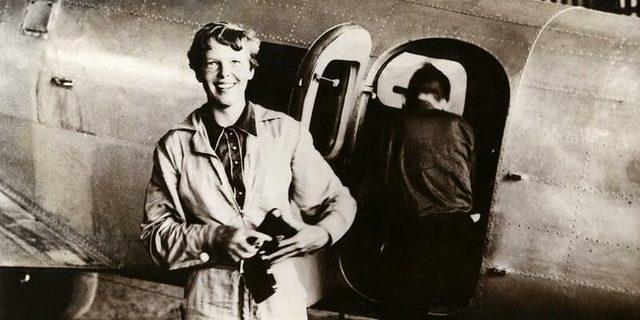 By Hannah Matthews
May 9, 2020
Posted in Time Travel, Travel

Despite her immense aerial achievements, Amelia Earhart is perhaps best known for the mystery surrounding her disappearance, during an attempt to circumnavigate the globe in 1937. The yet unsolved question of what happened to Earhart, and her co-pilot Fred Noonan, fascinates people all over the world. Countless attempts have been made to explain why their plane never reached Howland Island. These theories overshadow much of today’s media concerning Earhart. While this story is fascinating, we often fail to recognise her other remarkable achievements.

As a pioneer for female aviation and an influential women’s rights activist, should we be remembering this historic figure for more than her remarkable time as a pilot and consequential disappearance?

Despite becoming the first female aviator to fly across the Atlantic Ocean in 1928, a journey that would propel her to great fame, Earhart was seemingly unsatisfied. She described her role during the flight as being ‘like a sack of potatoes’- Earhart herself did not pilot the plane.

Previously, Earhart had previously demonstrated her courageousness as the Spanish flu pandemic caused devastation around the world, by working as a nurse and caring for infected patients. When she became ill herself, she used the months spent recovering to study mechanics. In 1921, she began learning to fly, taught by another woman, Anita Snook. After buying her first plane six months later, she had set the women’s altitude record.

Now, Earhart set about to remove her sense of dissatisfaction regarding her 1928 flight.

Only four years later, in 1932, she would become the first woman to make a non-stop, solo transatlantic flight. This time, instead of sitting by, Earhart was the pilot of the plane. This momentous journey not only flung Earhart into a life of huge recognition within the world of aviation but also made her a worldwide celebrity.

Throughout her career Earhart set multiple aviation records. She was among many women who were also earning themselves noteworthy records at the time. One such woman was Louise Thaden, who is the only pilot to hold the women’s speed, altitude, and endurance records. She won the 1929 Women’s Air Derby, in which Earhart only came third.

Why is it that Amelia Earhart’s name is so well-known, among many other great female aviators who we neglect to remember to the same extent?

In addition to her great achievements, Earhart’s charm and charisma in the public eye helped her immensely. From the beginning of her career, she was comfortable and confident with the press. Therefore, the public grew to adore this adventurous, yet soft-spoken woman. Perhaps, this explains why she is so well-known to this day, especially compared to other female pilots of the same era.

During Earhart’s career, flying was a male-dominated field. It was only by persisting in her passion for flying that Earhart became such a pioneer for women in aviation. In doing so she became a role-model for other women, demonstrating in a very public way that women should disregard society’s restrictive expectations of the careers and hobbies that they can undertake. Earhart actively worked to change these expectations, writing an aviation column in Cosmopolitan magazine, in which she encouraged women to go into aviation.

Additionally, she was the founder of an organisation for female pilots, providing support for other female aviators. She used her fame to draw attention to the inequalities faced by women and showed them that they can break into male-dominated careers.

She provided a valuable role model for other women, showing them that they too should demand to be treated with respect and fight for opportunities equal to those of men

Her accomplishments in changing the world’s view of women in aviation are also representative of the wider feminist movement that she involved with. As her fame grew, Earhart began travelling around the world, giving lectures on aviation and women’s equality. She would often talk to women’s rights organisations, encouraging women to stand up for themselves and pursue careers, to gain financial independence.

A further demonstration of her commitment to making lasting change for women was in her decision to become a Careers Counsellor for women at Purdue University. A role in which she encouraged female students to undertake careers beyond working in the home. Earhart was aware that progress was gradually being made for women, they were constantly gaining new opportunities, and she wanted to be a role model, to show other women that they too could make the most of these opportunities offered to them.

Throughout the length of her career, Earhart maintained her feminist values. She provided a valuable role model for other women, showing them that they too should demand to be treated with respect and fight for opportunities equal to those of men. She was determined to embark on her chosen career, that was seemingly closed-off to women.

Amelia Earhart’s achievements as an aviator are unlikely to ever be forgotten and neither should her achievements in the field of women’s rights.