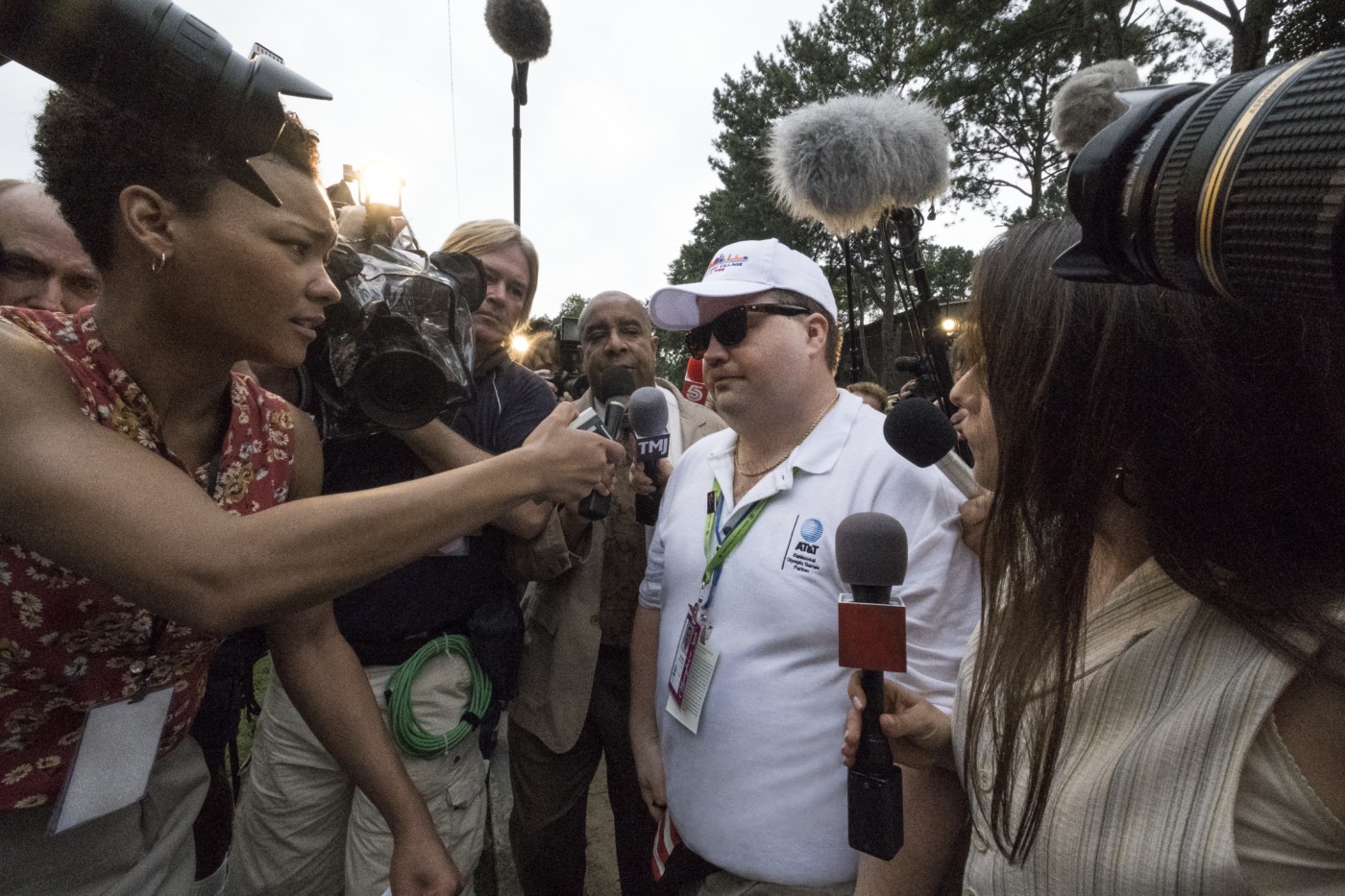 “Don’t go through my trash” tells Sam Rockwell’s Watson Bryant to Paul Walter Hauser’s titular Richard Jewell in the first scene of Richard Jewell. It’s the first of many indications of the tactics used by the media and institutions to manipulate and corrupt the good of the world and those who embody it. Clint Eastwood’s 38th directorial film, Richard Jewell, is an essential telling of a true story.
At the 1996 Olympics in Atlanta, security guard Richard Jewell – a man of “law enforcement” as he constantly reminds people – discovers a bomb and saves thousands of lives in the process when it eventually explodes. Regardless, he is treated as a suspect by the FBI, and routinely vilified by the press.

At the centre of the film is Paul Walter Hauser portraying Richard Jewell in a powerhouse of a performance.

At the centre of the film is Paul Walter Hauser portraying Richard Jewell in a powerhouse of a performance. I guarantee that in the years gone by, people will rightfully wonder how Hauser wasn’t nominated for Best Actor at this year’s Oscars. It’s a subtle yet commanding performance, depicting an incredibly wholesome, if naive, individual, one taken advantage of by institutions and those of higher power that have been corrupted. Those in question portrayed by Jon Hamm and Olivia Wilde, who in particular is having a lot of fun chewing the scenery (though the script becomes questionable when the treatment of her character ventures into sexist territory).

It’s a story that fits in perfectly with Eastwood’s late career wheelhouse, that of ordinary Americans elevated to hero status for seemingly doing what is right. Thematically it is perhaps closest to 2016’s Sully, a true story of heroism ultimately questioned by those in positions of power simply because the man was doing his job. Those dismissing Richard Jewell as simply a piece of ‘MAGA cinema’ (I assume due to Eastwood’s libertarian leanings?) either don’t understand Eastwood’s approach, or are simply ignorant of him and his filmography.

Throughout his career, both as an actor and a director, he has consistently been critical and suspicious of institutions and those holding power.

Throughout his career, both as an actor and a director, he has consistently been critical and suspicious of institutions and those holding power. It’s no coincidence that Magnum Force, a sequel to what many called a fascist film in the form of Dirty Harry, is a direct conversation with such remarks, offering self-commentary and reflexivity. For a period in the early 1990s, Eastwood made a series of films being self-reflexive of himself, and this has even continued into the late stages of his career, with 2018’s The Mule having him directly confront his own privileges as a white man in America. Richard Jewell continues these critiques, focusing on corruption of higher law enforcement in the form of the FBI. Jon Hamm’s character is the notable figure head for such criticism, portraying a man annoyed that such a threat of terrorism happened on his watch. Perhaps feeling ashamed or guilty for such incompetence, he decides to shift blame onto Jewell. If the ordinary man is at fault, then who cares about the failures of those in power? The shadowy nature of offices, often appearing as if they’re under lit, gives power to these seedy practices, a constant reminder of the impending shrouding of darkness that awaits Jewell in his new role as media sensation.

Eastwood’s direction is typically assured, and as the film progresses constant attempts at character assassination of Jewell become genuinely infuriating and despairing, with the film offering a
devastating critical approach towards ‘cop worship’. Something that feels so vitally an American problem (though I sure it isn’t just one), Jewell constantly reminds everyone that he is law enforcement. It’s part of his aspiration not only as a career, but as an attempt to gain respect from his ‘superiors’, as if that will make any difference to how the FBI or the media outlets view him. It’s a tear inducing narrative, seeing a whole-hearted, good man clinging to some form of respect from people who just see him as some stupid, overweight oaf. Each moment builds, whether it be them taking all of his, and his mother’s (a rightfully Academy Award nominated Kathy Bates), possessions to inspect, or the way they coerce him into trying to frame himself through constantly repeating the line “There is a bomb in Centennial Park, you have thirty minutes”. Eastwood constantly wires the tension while simultaneously shattering your heart. The fact that at times we as an audience begins to doubt whether Jewell did it or not is surely riveting commentary on how powerful the upper echelons of law enforcement can be.

Eastwood here also continues his late career streak of having strange oddities appear in his films: the fake baby in American Sniper, the multiple threesomes featuring an 88 year old Eastwood in The Mule, the entire neorealism approach of The 15:17 To Paris. Perhaps less bizarre than the latter two offerings, I still did not expect to see a large crowd perform the Macarena in a Clint Eastwood film.

Richard Jewell is an essential part of Eastwood’s late stage filmography, and while it may dampen the warm hearted ending of his previous film The Mule, if it proves anything, it’s that Clint Eastwood, at the prime age of 89, shows no signs of slowing down. And if he continues at this level of quality, then I say keep them coming.