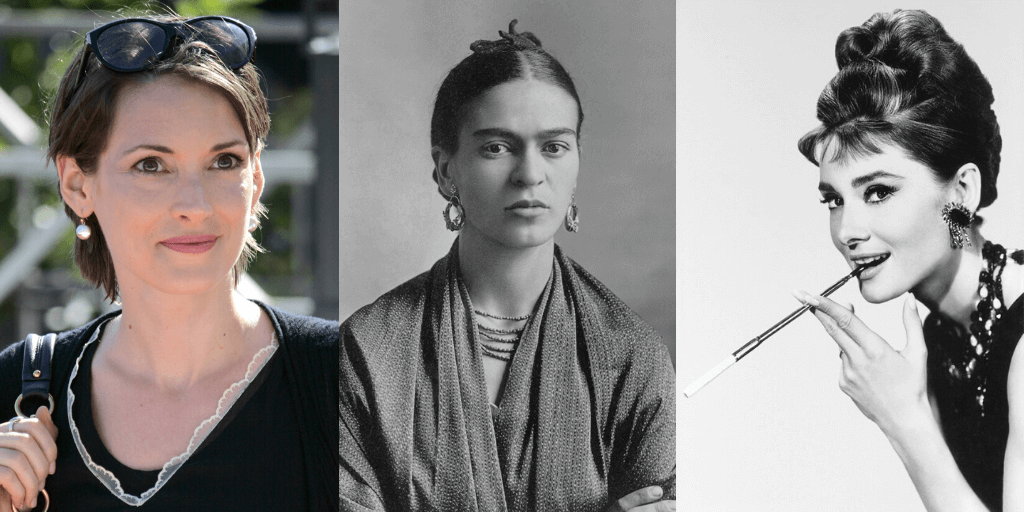 People should always try to celebrate those that inspire them. This is particularly important when it comes to women uplifting other women. In this piece, four writers each discuss the beauty and style icon whose classic style and breaking of traditional boundaries is inspirational to them. From the films of the 1990s to the world of Youtube – these four icons inspire our writers to be unique and true to themselves.

The year may be 2020, but the 90s are back and better than ever. Who other than Beetlejuice-come-Stranger-Things star, Winona Ryder, could serve as the icon of the decade of grunge itself?

It’s no surprise Winona has always been a beauty icon of mine since she’s often been coined the Audrey Hepburn of the late 20th century.

In fact, Ryder apparently received hand-me-downs from Hepburn herself, from one beauty icon to another. Known for her androgynous pixie cuts and for embracing her pale complexion, Ryder iconised the leather jacket, boyfriend-cut jeans and band-tees that make for one of the most effortless yet stylish looks we know and love today.

However, her legacy as a beauty icon is so much more than the grunge-chic that fills the Topshop racks (or online stores, now we’re in the age of coronavirus). Ryder helped to revolutionise women’s style. The boyish, tough biker-chick look became not only acceptable, but attractive among women, following many a decade previous in which women were only ever expected to wear skirts or dresses, and at least knee-length at that.

Winona became the face of an era that brought us chokers and spaghetti-strap slip dresses, all accented by her classic red lip. She took the modern and made it timeless. Forget the male gaze – Ryder restored agency of her own style. Her red-carpet looks will be reflected upon in admiration for decades to come, in the same way, we do with that of Hepburn. Nothing says female empowerment more than embracing androgyny and loving the skin you’re in, something which this beauty icon serves as a reminder of.

The legacy of Audrey Hepburn is iconic compared with other stars of the Hollywood Golden Age. While the likes of Marilyn Monroe and Grace Kelly are frequently compared to Hepburn – Audrey Hepburn had a substance behind her cinematic persona to vocalise that true beauty is more than skin deep.

Hepburn’s humanitarianism as a UNICEF Goodwill Ambassador in her latter career sets her legacy apart from the abundance of sex symbols who dominated the silver screen. Her elegance was striking, not merely in terms of style, but also attitude. This attitude elevated Hepburn as a symbol of class, sophistication and strength that was influenced by her childhood in Nazi-occupied Belgium.

Hepburn’s style was timeless and oozed sophistication. She set the trend for many classic styles that remain on-trend today. Hepburn’s classic looks such as ‘the little black dress’, her turtlenecks, trench coats and oversized black sunglasses continue to dominate the fashion scene. Such clothing also forms the basis of my own personal wardrobe, which is now also inspired by the soft tailored style of Meghan Markle who incidentally also basis her style according to Hepburn-esqué pieces.

Collaborations with the Givenchy fashion house, who designed many of her most iconic style moments, are what makes Hepburn’s looks so easily recognisable.

All of this is why I have to say that Audrey Hepburn is a timeless icon who redefined how we should understand beauty. She emphasised that true beauty cannot be bought: it is shaped by the attitude by which you treat others and the poise by which you carry yourself. This is encapsulated in Hepburn’s most prominent statement – “Elegance is the only beauty that never fades.”

In a world oversaturated with trends and influencers, it can be hard to find someone who you can resonate with and who can inspire you. Luckily for me, a few years ago I stumbled across a YouTube channel run by Jelian Mercado – a full-time mum to 4-year-old son Mateo. I immediately fell in love with her style. Despite being a teen mum, she still found time to shop for and look after herself, which is so important.

Jelian’s bold choice of trousers and skirts is what inspires me most, as I love experimenting with bolder looks, but often feel too self-conscious to try. Her confidence in her choices encourages me to feel confident too.

As well as this, Jelian is unafraid to wear her naturally curly hair down, and experiment with colours and styles – this is something that I rarely do as my hair is naturally frizzy, but I’m starting to learn how to style and embrace it. Her recent spontaneous highlights suit her so well and have urged me to also have mine dyed – something that I am excited to hopefully try out this summer.

It’s pretty common knowledge that I’m not massively into beauty and I never wear makeup. However, that doesn’t mean that I don’t have icons and celebrities whose style and signature look I admire.

Someone I have loved and been inspired by for many years is Frida Kahlo. For anyone who hasn’t heard of her, she was a Mexican folk painter who often painted self-portraits that illuminated a variety of social issues in Mexico. She was a very inspiring lady in many ways, and I love the role she played in fighting for indigenous rights, being part of an emerging feminist movement in Mexico and as a founding voice in the LGBT+ movement.

Her classic look is subject to a cult following and easily identifiable to anyone. It sounds very superficial but as an adolescent, I always had incredibly bushy eyebrows and a bit of a monobrow. I realised that I should just stop caring what other people think because Frida was an icon who sported a monobrow.

I love how she embraced her Mexican roots and refused to conform to Western beauty standards, and it is absolutely undeniable that she was an incredibly naturally beautiful woman. Her legacy in art, beauty and fashion is only a small part of the impact she had on the world but it’s something I admire her for, nonetheless.