Luke Ferrara, the 2019-20 Elite League top scorer, has signed a two-year contract extension with Coventry Blaze. Ferrara, 26, arrived in Coventry from Sheffield Steelers in 2017, and has since become established as one of the most productive forwards in the EIHL, improving his season’s points tally every year since arriving at the Skydome Arena.

Head Coach, Danny Stewart said: “Getting Feds back is a massive boost to our plans for next season and the foreseeable future. He’s bought into the jersey and club 100% and is the type of player and person that we want here. He gets better every season and it was great to see his hard work pay off last season. He’s a great pro and part of our leadership group. Bringing Feds back is a great start to our aim of retaining a big chunk of our players from last season.”

Ferrara is the first player to re-sign for the Blaze following the club’s third-place finish in 2020, with further signings expected to be announced throughout the summer. Andrew Johnston, however, will not be returning to Coventry, after signing for Boxers de Bordeaux.

Ferrara ended the campaign with 54 points, the fourth highest in the EIHL

Ferrara, a mainstay in Pete Russell’s Team GB squad, became the first British player to finish the season as the Elite League’s top goalscorer, notching 33 goals in 47 appearances for the Blaze in 2019-20. With 21 assists, Ferrara ended the campaign with 54 points, the fourth highest tally in the Elite League.

In what became the final act of the shortened 2019-20 campaign, Ferrara fired the Blaze into third in the standings, scoring the game-winning goal against Dundee Stars with just six seconds left on the clock at the Skydome Arena.

During his time with the club, Ferrara has amassed 173 appearances, scoring 66 goals and providing 65 assists across his three seasons in Coventry. An associate captain for the Blaze since 2018, Ferrara was also a member of the Team GB roster that earned promotion to the top group of the World Championships in 2018, and stunned France to remain in the top flight twelve months later.

Ferrara began his career with Peterborough Phantoms, his home-town club, winning the English Premier League Playoffs in 2014-15. Ferrara registered 240 points for the Phantoms, before moving to Sheffield Steers ahead of the 2015-16 campaign, where he became a two-time Elite League and one-time Playoff champion with the Steelers.

During his time at the Skydome Arena club, Ferrara quickly became established a fan-favourite, and his re-signing will be received as a statement of intent from the Blaze. Last week, Coventry Blaze announced that Danny Stewart had signed a contract extension that would see him remain at the club for the “foreseeable future.” 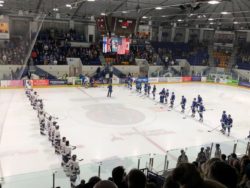 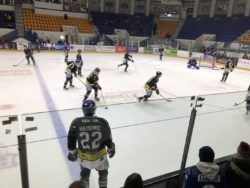