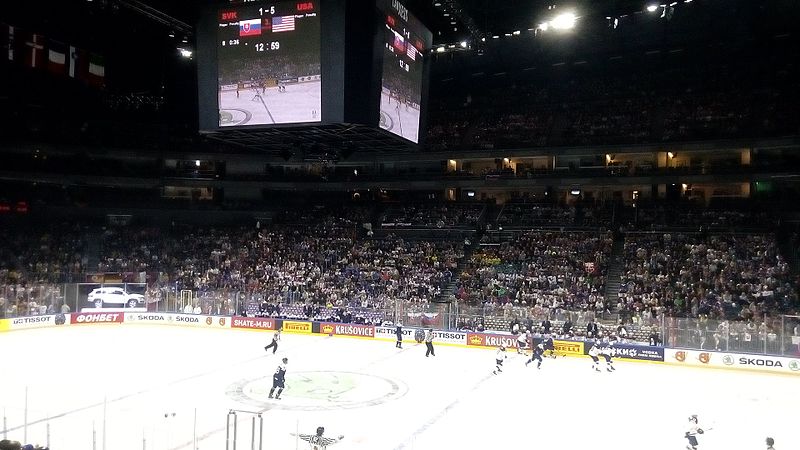 The final round-robin fixture of the IIHF World Championships in Slovakia delivered pure, unadulterated joy to Great Britain as the plucky Brits secured a historic 4-3 overtime victory against France to remain in the top pool of international ice hockey.

Having secured back-to-back promotions to the top flight of the IIHF World Championships, Team GB entered the competition in Slovakia as rank outsiders. Comprised almost exclusively of players from the EIHL (the highest level of ice hockey in the UK), the British squad travelled to Košice heavily tipped to lose every game at the tournament comprehensively.

The World Championships take place annually, with national teams promoted and relegated between divisions according to their position come the end of the round-robin phase of the tournament. Just two years ago, Team GB participated in the third tier of the World Championships alongside Japan. In Slovakia, Pete Russell’s team would face-off against the USA and Canada, the traditional powerhouses of the sport.

In order to remain in the top pool of the World Championships, Team GB knew that they would have to win at least one game – preferably at the expense of either Denmark or France. In the first game of the tournament, Team GB battled admirably but were unable to pull off an upset against a German roster filled with talent from the DEL.

In game two, Anthony Mantha, a star player for the Detroit Red Wings, delivered a lesson in ice hockey as Canada strolled to a comprehensive, and entirely predictable, 8-0 victory at the expense of Team GB. However, if it wasn’t for Ben Bowns’ heroic performance between the pipes, Canada could have won by a cricket score.

Against Denmark, in a game that GB hoped to be more competitive in, Russell’s side fell to an embarrassing 9-0 defeat. Perhaps distracted by Russell’s imminent move to DEL2, GB – for the first time this tournament – were truly humbled. Worryingly, the USA awaited Russell’s side next.

Team GB continued to battle hard against Slovakia and Finland

There would be no shame in losing to the USA, but Team GB simply had to make some kind of recovery following defeat against Denmark. Once again, Bowns was resplendent between the pipes for GB. The Cardiff Devils netminder made the play of the tournament to prevent Jack Hughes, predicted to become first pick in the 2019 NHL Draft, from scoring his maiden goal of the tournament. On an evening when Patrick Kane became the USA’s all-time top goal-scorer, Bowns stole the headlines as Team GB limited the USA to a 6-3 victory.

Team GB continued to battle hard against Slovakia and Finland but were unable to secure their first win of the tournament. As a result, Team GB languished in the relegation zone with one set of round-robin fixtures left to play, but Russell’s side could still dream of an upset. In order to remain in the top flight of international hockey, Team GB had to beat France in Košice.

Victory for GB would relegate France, while defeat for GB would result in relegation back to Division 1A without a point. In order to beat a French squad featuring Alexandre Texier – a Columbus Blue Jackets prospect, Team GB would have to stay out of the penalty box, be as clinical as possible, and limit France to as few chances as possible.

France had been unable to assert their dominance, and Team GB were playing with a newfound level of confidence

After the first period, Russell’s side had hardly put a skate out of place. After twenty minutes of end-to-end hockey, France had been unable to assert their dominance, and Team GB were playing with a newfound level of confidence.

However, just eight minutes into the second period, disaster struck. Bowns, screened out of the play by the France attack, was beaten by a looping shot from Anthony Rech. Four minutes later, Team GB trailed by three. For the first time in Košice, Team GB’s “Barmy Army”, a 500-strong group of travelling supporters, fell quiet. With France in an almost unassailable lead, the GB bench quickly called for a time-out. What Pete Russell said to his squad remains a mystery, but whatever he said worked.

Late in the second period, France gifted Ben O’Connor the puck just inside the blue line. A smart pass from O’Connor set-up a wonderful chance for Robert Dowd to deke and finish past Hardy in the French goal. It was only one goal, but it gave Britain hope.

Just three minutes later, France wastefully turned the puck over to the British forward-line again, but this time it was Mike Hammond who scored to put in Team GB in the ascendancy. At 3-2, Team GB had more than a puncher’s chance.

The Dowd line delivered a wonderful tilt for the British squad early in the third period to set the tone. Roared on by the travelling support, Team GB were magnificent in the third period. France, however, stood firm. Hardy was forced to make a number of smart saves during the opening exchanges of the period but rose to the challenge. With five minutes remaining, and with the prospect of relegation looming, Robert Farmer took it upon himself to change the course of British hockey history once again.

What came next will go down as the most important moment in British hockey history for a generation. With three minutes remaining in overtime, a loose Fexier face-off win allowed Britain to break up the ice at breakneck speed. Jonathan Philips raced towards the French goal with the fate of British hockey at his stick. Knocked off his feet by the French backcheck, Philips slid a wonderful pass to the onrushing Ben Davies, and the Guildford Flames forward duly delivered.

Against all the odds, against all logic, and against all convention, Great Britain has completed ice hockey’s international great escape. Whatever the future holds for Pete Russell and his team, Team GB have shocked the world of ice hockey in a way that no one could have predicted.

In 2020, Great Britain will be heading for the IIHF World Championships in Switzerland – and the British ice hockey community couldn’t be prouder.