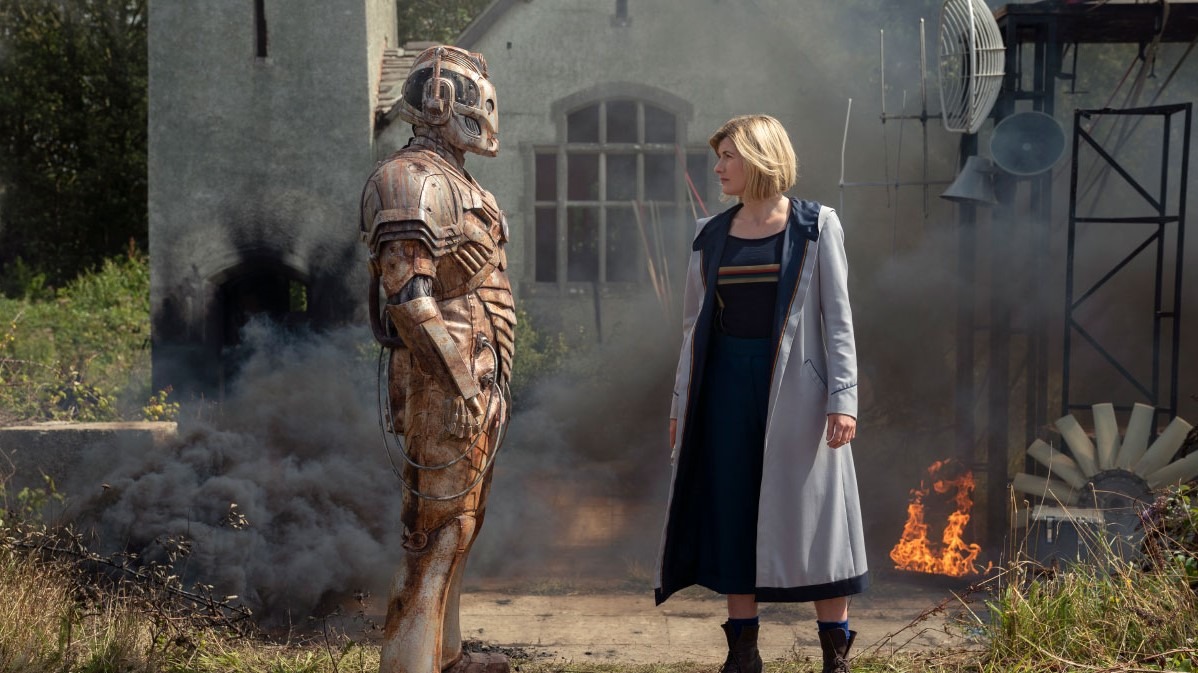 The penultimate episode of Series 12 follows immediately on from episode 8, with the Doctor and her companions landing in the aftermath of the Cyber-Wars. It’s a great idea for a finale; the Cybermen are often at their best when they’re desperate for survival, and it means they have to become more menacing and cunning. Far too often they’ve been reduced to metal foot soldiers, and after the previous week’s use of them, things looked promising.

It’s a real shame then that this episode doesn’t really do anything new or interesting with that. The last of humanity attempting to fight, escape or even just survive against the last of the Cybermen could be a brilliant story, but it all just becomes a bit… dull. Which when you consider this is a show that can go anywhere and anywhen makes it all the more disappointing.

Again, writer Chris Chibnall tells us far too much and shows us far too little. As an audience we’re supposed to sympathise with these space refugees, but they seem distant at best and bland at worst. Perhaps the worst example of this was one character exclaiming “We’re carrying the Cyberman that makes other Cybermen scream!” literally seconds after we just saw that exact incident. Far too much time is wasted on exposition and needless dialogue and not enough is spent on getting to know what life is like for these people. It’s not a great sign when the Lone Cyberman has more depth and character than the survivors we’re expected to root for.

On a more positive note, the Cybermen have had an excellent redesign and one that is somewhat reminiscent of their late 1960s designs. Composer Segun Akinola is on fine form again, creating a powerful, alien, perhaps even unnerving soundtrack for those iconic baddies. Oh, and then there’s Brendan.

Doctor Who shouldn’t be afraid to present something unusual; it wouldn’t had survived for almost sixty years if it hadn’t from time to time

Throughout this episode we keep cutting to what appears to be Ireland in the 20th Century. We witness a child, Brendan, being discovered, being adopted and growing up. I suspect many viewers thought that they had sat on the remote and had accidentally switched to an ITV period drama. Of course, all is not as it seems as this Brendan apparently cannot die, despite being shot and falling off a cliff. As an old man, he is then bundled back into his Garda station by his adoptive father and old boss – neither having aged – and has his memory wiped. It’s mysterious, even surreal, and is far more engaging than the main Cyberman story. Doctor Who shouldn’t be afraid to present something unusual; it wouldn’t had survived for almost sixty years if it hadn’t from time to time. The Brendan story may have felt strange, but it was undeniably interesting. I wouldn’t want every Doctor Who episode to be interrupted by the experiences of an elderly Irishman, but this instalment was all the better for it.

During all this, the Doctor stole a Cyberman ship and arrived at ‘the Boundary’ where Gallifrey appears through a portal. And surprise! The Master is back having escaped once more. As somewhat annoying as it has to have a third Master and Cybermen finale in just five series, Sacha Dhawan is always a welcome sight and I hope he and Jodie Whittaker’s Doctor have far more stories together in future.

The ‘chased-by-the-Cybermen’ story only works if the audience can relate to those being chased, and due to the awful dialogue, that’s difficult to do

‘Ascension of the Cybermen’ is an odd episode. Its Brendan subplot is intriguing and leaves the audience wanting to know more, but the main plot feels uninspired. The ‘chased-by-the-Cybermen’ story only works if the audience can relate to those being chased, and due to the awful dialogue, that’s difficult to do. This episode obviously had to set up elements for the finale, but the main plot felt like it could have happened in five minutes once one realises the story is only there to get the Doctor back to Gallifrey. It’s disappointing that despite their welcome redesign, the Cybermen have reverted back into their pre-Series 10 generic monster/soldier role. Still, Series 12 still has one episode left to explain its many mysteries, including Brendan, Ruth and the Timeless Child. The Doctor will have to discover the secret of ‘The Timeless Children’…