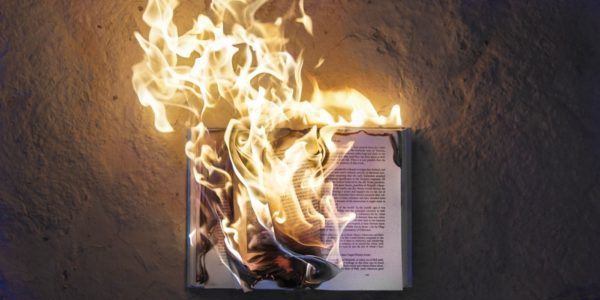 One of my first reading memories is from primary school, where the books you read were dependent on your ability. This allowed teachers to determine our reading skills and choose appropriate books. Teachers did this for our own benefit, but it was, when I think about it, censorship. Less-able readers were prevented from reading trickier texts, while highly-astute readers never enjoyed an easier text. The same is true in bookshops, where children’s books are inevitably targeted by age.

Censorship, however, can be far more serious. Ever since time began, governments and those with power have restricted ideas. By preventing what people can read, organisations recognise the power of words. Governments who want to increase their control over literature have used all kinds of explanations to justify their intrusion into the individual texts.

A typical example is usually offensive language and age appropriateness. The level of age groups specifically links to sexual content, for example in Fifty Shades of Grey. It is the responsibility of parents to decide what their children read, not the state. Once an individual is an adult, it is similarly their choice, not the government’s.

Religious attitudes play a key role in book restriction from individual readership. If a government is aligned to particular religious affiliations, or a religious group has significant influence, that group will want to promote their religion. Anything that goes against this, therefore, is banned and dismissed. For example, On the Origin of Species, Charles Darwin’s defining 1859 text on evolution, has been repeatedly censored. Similarly, versions of the Bible have long been inaccessible. This religious and political affiliation can often lead to books containing witchcraft being censored. According to the American Library Association, the Harry Potter series was the most challenged book series in 2001 and 2002 because of witchcraft.

There are things that each of us find offensive – be it swearing, overly sexual content or criticism of religion. But one person’s offence is another person’s enjoyment. To ban books on the basis of offence would set a deeply dangerous precedent. What if someone found women’s or LGBT+ rights offensive? Books, rightly, would never be completely banned because of this. An individual’s right to read stories should always trump another individual’s desire to censor.

Some of the greatest works of fiction have repeatedly been challenged, with censorious individuals aiming to prevent others from experiencing powerful novels. To Kill a Mockingbird, Harper Lee’s ground-breaking work on racial equality, has repeatedly been challenged because of its representation of ‘institutional racism.’ It is quite bizarre that the defining themes of the work are what justifies its banning.

Similarly, William Golding’s The Lord of the Flies has been challenged for its ‘demoralising’ attitude towards humanity. Yet its exploration of power and humankind is quite brilliant. The reasons individuals want to censor books shows how little they understand them. This couldn’t be better highlighted than by an attempt to ban George Orwell’s 1984, one of the greatest novels of all time. The reason? Being pro-communist, which is far from the truth. Even if the novel was pro-communist, it still shouldn’t be censored.

Society must explore the dangerous implications of banning such a range of books. Nobody benefits from the censoring of the experiences of marginalised groups. The Atlantic reports that American children’s book publishing often defined books by their ‘appropriateness’ rather than celebrating experiences. Contemporary censorship is based around childhood access, but that doesn’t mean religious and political censorship has gone away.

While books in the past usually went through libel checks, a modern form of censorship is emerging. The Guardian have reported that publishers are self-censoring, for fear of ‘the anger of the mob’ against certain books, meaning certain ideas are quashed. In the age of social media, it is easy to see why publishers are almost self-censoring for a fear of backlash. But this is something extremely dangerous because it reduces the breadth of ideas under discussion.

Only through openness can ideas be placed in the spotlight and put under scrutiny. If ideas are censored for being too offensive or morbid, they will be driven online and underground. This will allow an echo chamber to develop instead of publication forcing accountability. While publishers already censor books based on what will be commercially successful, it is vital that ideas within any book are not a barrier to its publication.

To censor is to fear a debate and hold ideas to inspection. Publishing books regardless of their content: witchcraft, political and religious views, sexual content, is the only way to ensure visions for the world are open to all. The power of words is extraordinary; it is why I love literature. It is also why I want anyone to have the freedom to read those words.