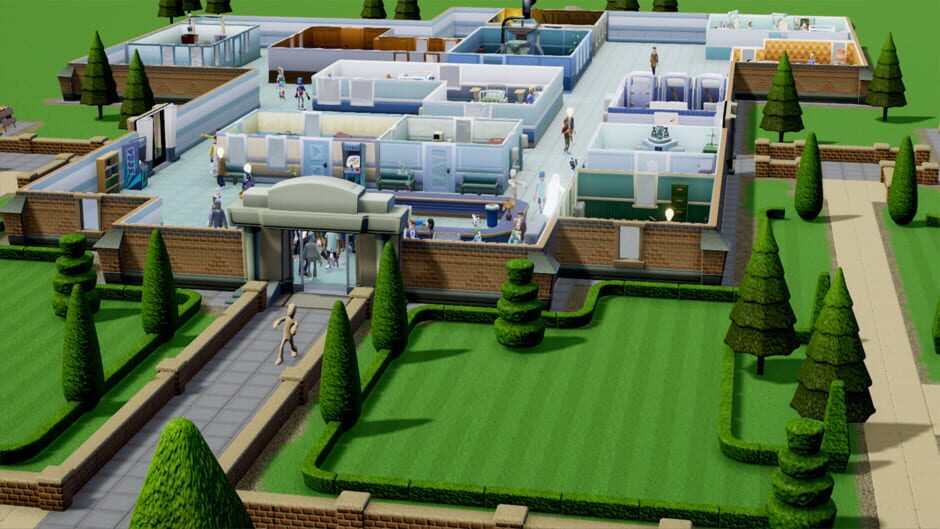 With healthcare taking up a sizeable portion of the news at the moment, it feels strange that I would retreat into a hospital simulator game to escape the news. The updated version of Two Point Hospital has come to the Switch, and it recaptures everything that was great about the game—the humour and charm, coupled with a variety of customisation and gameplay options, makes for a highly recommended experience, with only a few niggles getting in the way.

Two Point Hospital is a management game that casts you in the role of a hospital administrator. You are responsible for ensuring patients are treated, that your staff are both content and well-paid, and that you don’t fall foul of the health inspectors. To achieve this, a patient’s journey through the building must be as seamless as possible. Initially, this is a simple process—hire a receptionist and build a reception, and hire the doctors who can deal with their needs. But as things quickly evolve and you make more money, you can expand the services your hospital can offer, whilst also juggling the finances, the hospital’s rating,  and the human element to keep things running smoothly.

If you’re going to be stuck indoors for weeks on end and are after something to play, you could certainly do a lot worse than Two Point Hospital

As bizarre as it may sound for a game that is essentially about admin, Two Point Hospital is a highly enjoyable experience. This is, in part, because it is hilarious. If you were concerned that dealing with illness may be bleak, worry not—patients may suffer from ‘Lightheadedness’, leaving them with a lightbulb for a head, while the ‘Mock Star’ condition turns them into Freddie Mercury. Each of your staff feels like an actual, well-rounded character, with fun names such ‘Dr Explosion’ and strange personality traits like ‘owns a crossbow’ (something I found strangely endearing). Even the premise of patient death is rendered darkly comical as their ghosts haunt the building’s hallways, causing mischief.

The game was originally designed for PC, and I was worried that the controls may not translate well over to the Switch. Wisely, this version of Two Point Hospital drops the touch-screen controls that seem a natural transition from the mouse, using an intuitive system that you’ll pick up almost immediately, centred around a handy menu in the bottom-left corner. It’s not perfect, as it becomes harder to select items as your hospital gets increasingly busier, with the game seeming reluctant to let you place items exactly where you want to. Also of minor annoyance is the lack of ease in choosing who to treat—if someone has an illness you cannot deal with, you are asked every time whether to build a new room or send them home, and a single toggle option would have gone a long way.

The fact that there is no right way to play makes it even better, as no two hospitals will be the same

On the whole, Two Point Hospital’s experience is enjoyable and particularly taxing. Gameplay starts off nice and easy, and it’s exciting to see your hospital grow. When you’re at an advanced level, finding those little tweaks to improve your hospital experience is a source of great satisfaction.. Organising things such as plants, air-conditioning and the colours of the rooms may not sound like the most obvious fun, and it’s a testament to the game design that it really engages you. It may be overwhelming at times when you get busier and busier, but I love diving into my hospital and dealing with the myriad of issues and people.

Two Point Hospital is a great management experience and the fact that there is no right way to play makes it even better, as no two hospitals will be the same. An intuitive system gives way to some complex optimisation that will keep you coming back for more. If you’re going to be stuck indoors for weeks on end and are after something to play, you could certainly do a lot worse than Two Point Hospital.