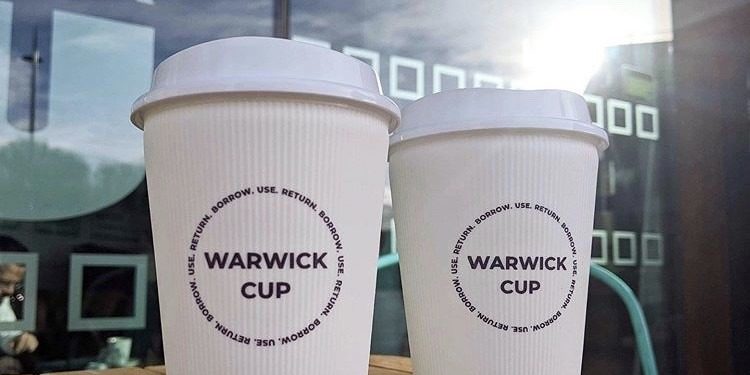 As the climate clock counts down, single-use consumption habits keep ticking up. In the UK, another minute down equals 5,555 disposable cups sent to landfill, according to environmental charity Hubbub. With less than 1% of cups recycled country-wide, 750,000 single-use cups are piling up at Warwick each year.

Three students are striving to change our on-the-go consumption habits by introducing Warwick Cup – a campus-based reusable cup sharing system. Ahead of its launch, I interviewed co-founders Maddie Booth, Hollie Ryan and Ellie Church to find out how the system will work and what impacts it could have.

Warwick Cup aims to end campus dependency on single-use cups, by creating a closed-loop sharing system. Initially to be trialled at Curiositea, students, staff and visitors alike will be offered a free to use reusable cup. The cup can be used around campus and dropped off at convenient collection points located around campus. The Warwick Cup team will take the used cups, clean them and place them back in the cafe for other students to use.

In comparison to disposable cups, Ellie tells me that their cups will “create less CO₂ than any alternative cup provision”; including, 95% less than paper cups and compostable cups. Based on Monash University’s Borrow Cup, the system hopes to become an essential component of everyday campus life by ingraining planet-saving habits into the student psyche.

Hollie is worried that businesses are taking a wrong turn in their surge for compostable alternatives to plastic waste. She says that “although it may seem better, it cannot be disposed of without contaminating the recycling system”. In addition, once it reaches its inevitable landfill destiny, “it will emit more methane than a plastic cup”. Instead of “making the problem worse” with flawed single-use alternatives, Warwick Cup will prevent the waste in the first place.

From funding issues to rival schemes, the journey to bring Warwick Cup to trial has been fraught with challenges. Supported by Warwick Retail and Warwick Enterprise, Maddie is hopeful that sustainable sharing systems will work “beyond Warwick and beyond cups”. For the time being, Maddie emphasises, the “goal is for Warwick to become a non-single-use campus” where there “will not be an option to have single-use cups at all”.

Reflecting on the obstacles, the co-founders want to advise similar start-ups, particularly in the sustainability sphere, to “never take no for an answer” and not to “give up just because you hit one boundary”. Money is clearly doing the talking, when it comes to the success of start-ups at Warwick, indicating the importance of framing sustainable initiatives within a business-centred narrative. Maddie reveals that it is costing the university 15p per single-use cup, which means that there is money to be saved by investing in reusable cups.

On the flip side, Warwick Cup is working to challenge dominant capitalist perceptions of cheap single-use materials having no value. Hollie says that the cup sharing initiative will have “knock-on effects for changing perspectives on single-use waste consumption” because it draws attention to the environmental detriment being caused by our modern-day throwaway culture.

When I ask the co-founders how they think the university is doing on climate action, their response is a mixture of hope and anguish. Hollie describes it as an “institutional problem” across all universities, which will require “bottom-up system change” to fix. Similarly, Ellie and Maddie find optimism in student-led initiatives to better the environment. All are grateful for the support given from the university to Warwick Cup to help generate environmentally-conscious change.

The success of Warwick Cup will require students to get involved as volunteers and advocates. Maddie stresses that it is a valuable opportunity to have a strong impact on a sustainable start-up, where any and all expertise is welcome. Alternatively, for those who are not inclined to go out of their way to protect the environment, the convenient cup initiative will not require a deposit or extra effort to return.

It has never been so easy to make a positive environmental impact with your coffee order. No lugging around your personal reusable cup or having to choose between your climate conscience and caffeine compulsions. Could Warwick Cup be the climate solution that we have been searching for?

Wrapping up the interview, Hollie takes one final chance to repeat Warwick Cup’s “Borrow. Use. Return” slogan, as she urges high return rates for the upcoming trial, which is scheduled to take place by the end of this month.