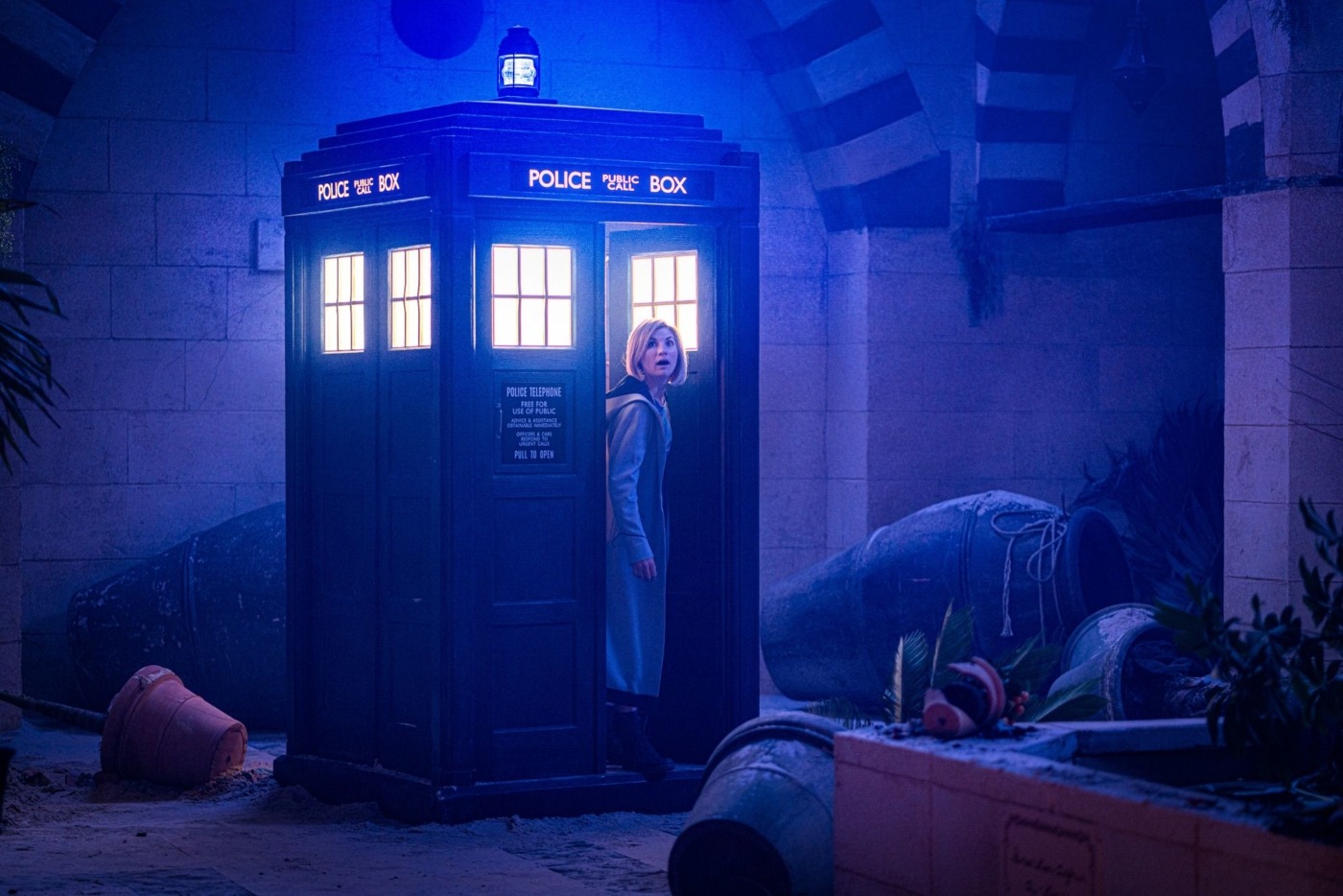 This is a very unusual episode of Doctor Who. ‘Can You Hear Me?’ is thought-provoking and surprisingly dark, and one of the most complex stories we’ve had for a while.

‘Can You Hear Me?’ begins with the Doctor returning her three companions to present-day Sheffield whilst she heads off to 1380 Aleppo. In Syria she finds Tahira, a young woman haunted by monsters, whilst her companions witness a disturbing man dressed in black, and experience bizarre visions. The five of them then proceed to visit a space platform where a woman in white is apparently being held prisoner. The Doctor vows to release her. It sounds like a pretty standard adventure, so when it emerges the Doctor has just accidently freed another villain the twist works well.

Thought-provoking and surprisingly dark, and one of the most complex stories we’ve had for a while

Ian Gelder puts in a deliciously evil performance as Zellin, and although we don’t get to see much of Clare-Hope Ashitey’s Rakaya, the two convincingly play the pair of sadistic immortals. There are even some references to other immortal beings in the show, which rewards the fans without confusing the wider audience. After the previous series’ disappointing assortment of baddies, it’s good to see writers Charlene James and Chris Chibnall provide us with some memorable and spooky threats.

The duo’s plan involves exploiting humanity’s nightmares. With the companions captured, we get to see their worst fears. It’s annoying we only really get to see this sort of situation in the companions’ 18th episode, but better late than never. Ryan’s fears are the least interesting, apparently involving the Dregs from ‘Orphan 55’. Graham however imagines a situation where his cancer has returned, and where he is treated by his late wife Grace who demands to know why he couldn’t save her. It’s an impactful scene and the sense of guilt and fear are conveyed extremely well, helped by the dialogue which feels far more natural this week.

What I didn’t expect ‘Can You Hear Me?’ to do was to explore Yaz’s history quite so much, although I am glad it did. Her fear apparently involves an incident from three years ago, where she ran away from home. The reasons are never fully revealed, though clearly she is struggling with her mental health, as is Ryan’s friend Tibo. Television generally has had a bad reputation when it comes to presenting mental health, and there are others far more qualified than me who could talk about that, but here I really appreciate the fact Doctor Who has treated the subject with maturity.

It’s not presented as something which can be easily solved, or worse, as something which makes a character evil, but as a complex subject which affects different people in different ways. I’m not sure if it works quite as successfully as ‘Vincent and the Doctor’ from 2010, but it’s admirable nonetheless. From the two planets defeating the immortals to Tibo’s discussion group, there’s the theme of speaking out and working together throughout this episode, and if that helps viewers to reduce the stigma around mental health then I think that is a good thing.

Perhaps the weakest element this week was the pacing, which mostly was fine until the final act. There’s a sense of karma as the immortals are imprisoned, trapped with a creature they themselves manifested from nightmares, though this resolution happens extremely quickly. As such, the Doctor is never really placed into any perilous situation and I can see that irritating some fans. The fact the villains are basically defeated with a few presses of the sonic screwdriver is also annoying, as is the fact the companions don’t really do much once their nightmares are over, though it was interesting to see the three of them question their lives and how much longer they can go on travelling in the TARDIS.

‘Can You Hear Me?’ is a fascinating episode of Doctor Who. It’s hard-hitting and frankly difficult to watch at times, but also celebrates the best of humanity with its themes of co-operation, support and compassion. It’s a flawed episode that could have benefited from a few more drafts and an extended runtime, but overall I appreciate what this story tries to do.