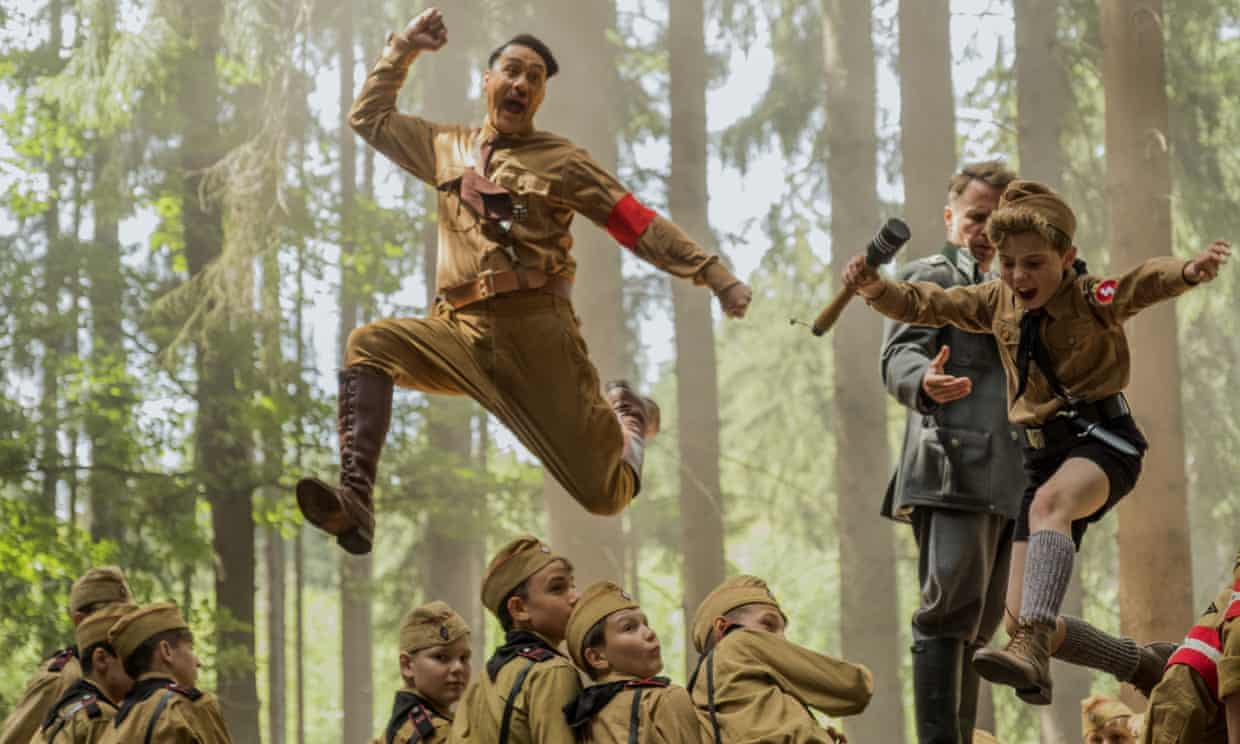 ‘Jojo Rabbit’ is a catastrophic misfire

When discussing Schindler’s List, famed director Terry Gilliam said: “We had to save those few people, happy ending… But that’s not what the holocaust is about, it’s about the complete failure of civilisation to allow six million people to die”. Audiences desire, if not crave, comfort – they like to know they need not worry. Which can be perfectly fine, but when dealing with subject matter that concerns itself with one of the worst atrocities ever committed, perhaps a nuanced approach may be best. Taika Waititi’s self-proclaimed ‘anti hate satire’, Jojo Rabbit, is not such an approach.

Jojo Rabbit, or Moonrise Kingdom: Hitler Youth Edition, follows ten-year-old boy Jojo and his imaginary friend Adolf Hitler in World War Two Germany. Jojo wishes to be the best little Nazi he can be, but when he discovers that his mother is hiding a young Jewish girl upstairs, his worldview begins to shift, forcing him to question everything he believes and what he’s been taught.

Wacky shenanigans and character interactions can only get you so far, and Waititi’s witticisms fail him here

The satire starts strong, with an opening title sequence featuring images of Hitler juxtaposed with a needle-drop of a beloved band from the sixties, drawing attention and mocking the celebrity-esque response people had to Hitler. An almost ‘Hitlermania’ if you will. It’s a nice little social and cultural critique, highlighting blind fanaticism and societal failings. However, the film appears to peak too soon. The rest of the film’s comedy feels like jokes you’d expect to see broadcast on a bad episode of Saturday Night Live, and they’re the jokes that actually land. Wacky shenanigans and character interactions can only get you so far, and Waititi’s witticisms fail him here. While the film is distinctively Waititi, and cements him as an auteur (something I will admit I was dubious of), it is his stylistics that ultimately let the film down. His style puts Jojo’s perspective, that of a naive ten-year-old, at the forefront, but in doing so infantilises the entire subject, as if the audience were children too sensitive to pick up on mentions of genocide.

The film’s depiction of Nazis feels very 1970s, with the campy German aesthetic coming through every actor unfortunate enough to play a Nazi. Portraying them as oafs, as if to question how these people ever achieved such levels of power and committed such vile acts of hatred, comes across as worryingly disrespectful. Images of indoctrination are played for whimsy and laughs, never engaging with or trying to understand how this could’ve happened. It all ultimately comes down to: “Oh look how daft and silly these Nazis are!”. It’s frankly outdated, and proves a slight and timid jab at its target, playing the entire thing far too safe. The film especially trips up when pursuing any sort of emotional response. When an attempt is made at a hard-hitting scene, Waititi fails to toe the line, either feeling the need to underscore with a joke, or just letting it hang in the air. Of course, the film is so flimsy that often the audience doesn’t know when which one has occurred.

It’s frankly outdated, and proves a slight and timid jab at its target, playing the entire thing far too safe

Quite frequently I was reminded of the failed sitcom Heil Honey I’m Home!. Cancelled after just one episode, the show centred around Hitler and Eva Braun living next door to a Jewish couple. Of course, it was a disastrous idea for a sitcom whichever way you look at it, and while Jojo Rabbit never necessarily reaches the tastelessness of that sitcom, it probably wasn’t a reference point they intended.

The saving grace of the film is the ensemble Waititi managed to gather. Roman Griffith David as the titular Jojo, in his debut screen appearance, perfectly conveys the confusion of growing up in Nazi Germany, and Thomasin McKenzie, who was a standout in last year’s Leave No Trace, is remarkable. The rest of the cast do their best too, with Scarlett Johansson a wonderful mother to Jojo, and Sam Rockwell clearly finding himself his own niche playing racists, but the material lets them down. The fact that Stephen Merchant was put to better use in Good Boys from earlier in the year should say everything, even if his scene in particular is perhaps the best at mocking Nazi protocols.

And we can of course not forget Taika Waititi himself as Adolf Hitler. When asked why he chose to play the role (as a Jewish man of Maori descent) he said: “What better ‘f*ck you’ to that guy”. While that is extremely commendable, that is unfortunately as far as this film is willing to go. It may make the Nazis look silly, but never actually delves into the horror and atrocities such ‘silly’ people committed. While on the streets of America people are actually punching Nazis in the face, this film instead feels like a tweet sent out to your followers who all share the exact same views.

Jojo Rabbit is, unfortunately, a waste of a premise. With an insight consisting of “That Hitler was a wrong ‘un”, it fails to balance its humour with sombre tones, if it even tries to evoke any at all. In its attempts, it wants to have its cake and eat it too. Hard-hitting it is not, instead allowing the audience to nod and agree so they can go home and not have to worry about anything. In the end, this ‘anti-hate satire’ is a catastrophic misfire.