Gripping, hilarious and gut punching: ‘How to Disappear’ is a must-see

Upon arriving at the Arts Centre, it occurred to me that perhaps I should have done some more research. I had watched the company’s trailer, but for a play with such an intriguing title, I had little idea of what the plot was. Unsure of what to expect for my first review, I took my seat and – while enjoyable isn’t quite the right word – How to Disappear is a fantastically provocative piece of relevant theatre, brilliantly staged and acted with real skill.

Fin Kennedy’s award-winning play, first staged in 2007, follows struggling marketing expert Charlie, who we meet mid-mental breakdown amid a high-pressure corporate environment, wandering around with his mother’s ashes. It is very much a play of two halves – in the first, we follow his deterioration to the point of crisis. In the second, his old friend, Mike, helps him to commit identity theft – just “go to graveyard near where you grew up, and look for the gravestone of a child”, the opening casually suggests. Charlie is also in conversation with pathologist Sophie, who insists that he has drowned, and that his body has just been retrieved from the Thames.

They handle a difficult and often ambiguous narrative skilfully, balancing intrigue and clarity with great success

Kennedy’s work, alongside Selwin Hulme-Teague’s direction, assisted by Hatty Horscroft, invokes questions about identity alongside mental health, the possibility of truly shedding our pasts, and who we really are when everything has been stripped away. Perhaps surprisingly, the play is frequently hilarious, facilitated by the cast’s excellent timing. This winning combination of humour, often morbid, with a provocative and raw story is brilliantly balanced. Hulme-Teague and Horscroft handle a difficult and often ambiguous narrative skilfully, balancing intrigue and clarity with great success.

Hulme-Teague’s cast is strong without exception, but lead actor Tom Fletcher deserves particular recognition for his skilled portrayal of Charlie. To so successfully sustain a state of fluctuating turmoil and anxiety is remarkable. The cast make light work of Kennedy’s fast-paced script, driven effectively by both naturalistic dialogue and a present tense stylised narration of invisible action, including characters narrating their own behaviour. The multi-rolling is done to strong effect also, with actors managing to capture different mannerisms to create genuinely distinctive characters. However, Kennedy’s strange balance of fleshed-out characters – the lost and found tube worker, for example – and caricatures including some of Charlie’s co-workers, brilliantly performed in themselves, is occasionally a little alienating.

Immediately upon entering the Studio, the set felt clinical and eerie – a black frame with props strapped to the posts, including a particularly unnerving grey doll. Hulme-Teague chooses to stage How to Disappear in the round, a decision which leaves the audience exposed and perfectly facilitates such a raw performance about what people are made of. This works to the play’s advantage, especially in prolonged eye contact of the actors with audience members during an extended movement sequence preceding the opening dialogue.

In fact, the play’s movement direction deserves particular credit, especially the unnerving jerky contortions of the opening scene overseen by the prowling pathologist. This returned effectively at the end, tensely building to the climax, distressing despite its inevitability. This was really aided by the eerie costumes, ready to party but with multiple patches, and the strange inclusion of party hats signalling an inhuman conformity. It’s hard to imagine that How to Disappear would be anywhere near as gripping without Tash Boret’s lighting design and Germaine Palfrey’s sound design. Their combined work was at its most impressive in creating an overwhelming sense of claustrophobia during Charlie’s peaks of turmoil.

Gripping, hilarious, and gut-punching, this raw and provocative exploration of identity is on until Saturday – and I truly cannot recommend enough that you don’t miss this one.

How to Disappear Completely and Never be Found is at Warwick Arts Centre until Saturday 1 February. Tickets are available here.

Gallery image with caption: Lost treasures by Van Gogh and Klimt: stolen art and how to recover it 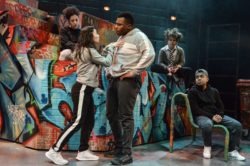 Gallery image with caption: “Exciting, musically charged and heart-warming” a review of the Belgrade’s ‘Crongton Knights’ 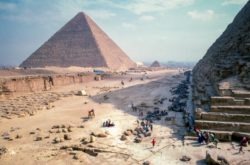 Gallery image with caption: A phenomenal success: a review of ‘The Prince of Egypt’