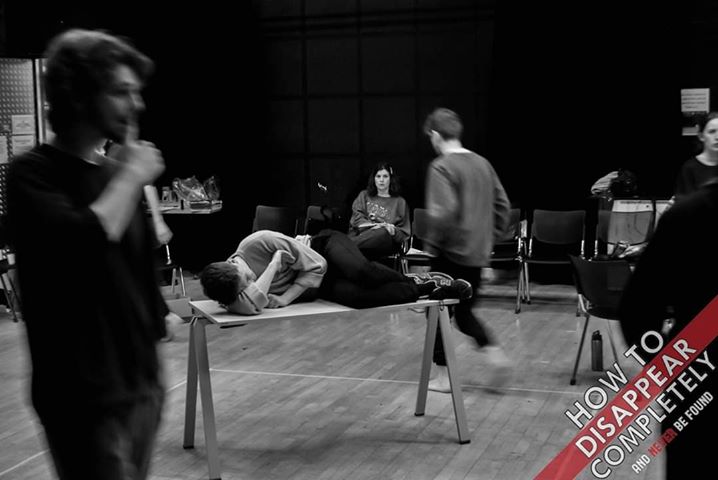 When I sat down last week to talk to some of the team of WUDS and Tech Crew’s upcoming show How to Disappear Completely and Never be Found, the overwhelming feelings I was left with were intrigue and excitement. The title of the play alone is enough to draw an audience in, but having never heard of the play before I wanted to know a little more.

Director Selwin Hulme-Teague explains to me: “It’s about this guy named Charlie, and he’s kind of at breaking point – that’s where this show starts. It explores what happens when someone just keeps going further down and continues to deteriorate. A few things happen: his mom dies, he faints on the tube, and then he gets caught stealing some money. He runs away and comes to his family friend, Mike, who tells him how to make himself disappear and leave all his problems behind. That’s one half of the show. The other half is about what happens when you leave yourself behind and you find someone new: how much is really left behind and what stays with you?”

I was curious to know what attracted the team to this show, and Selwin tells me: “I wanted to do a show that went beyond naturalism. I wanted something that would really delve deep, and would use the capabilities of the studio as well – it was that combination. I studied the play at A Level and it always stayed with me, I thought, one day I’ll do that. And then I found myself at a point where I wanted to do something crazy and mad, and this was the perfect show.”

It shows that we should be grateful for the people that we have around us, that can support us and make sure that you don’t run away when things go wrong

But for Tom Fletcher, who plays Charlie, it was the detail of the characters that drew him to the play. “This character is so fascinating because he’s a walking antithesis: he can be so fatalistic about certain things but he can also be quite hopeful, he can be very lethargic but also energetic. It makes him so challenging to play on stage, but also so exciting because there’s so many avenues to explore.”

Both Selwin and Tom feel that Charlie is a character we can all learn from. Tom explains: “The most important thing for me to take away is watching Charlie’s acceptance that there are some things that you can change and some things you can’t. I think especially for university students in this really crucial time in our lives where you’re faced with this fork in the road and having to make decisions. We get so overwhelmed – either stuck in one mindset or thinking too much about all the possibilities of the future – this play shows that you have to ground yourself and accept that life can go in any way but you will be fine. Charlie’s a character who feels like he needs to have full control and to know where he’s going, and it ultimately ends up for the worse.

“I’m hoping something positive will come from it,” Selwin explains. “People will know that it’s okay to talk about your problems and that running away from them is not a good idea. But also it shows that we should be grateful for the people that we have around us, that can support us and make sure that you don’t run away when things go wrong. I think that’s important. That’s what I want people to take away.”

What makes this show particularly special is that it is a collaboration between WUDS and Tech Crew, something that, as Lighting Designer Tash Boret explains, “doesn’t happen very often.” She tells me: “The nature of the play means we can do a lot more with it. With the surrealism there’s a massive scope for the technical aspects and how sound and lighting is used to bring you into Charlie’s life. We can really do whatever we want.”

People just won’t be able to sit back at all

The staging is clearly something that the team has thought about a lot. Tash says: “It’s being staged in the round which is exciting.”

Selwin goes on to explain: “It’s very close – immersive. It’s not going to be all interactive-immersive, but the audience will be transported into this world. As soon as you step into that theatre, you will be right in front of the action, there will be no escape. Obviously, you can exit it if you want to, but you won’t want to! I think because it’s a fast pace, people just won’t be able to sit back at all.”

Tash adds: “It’s going to have some really visually striking images as well with how we’re playing with the lighting. With it being in the round having lighting from all directions is quite interesting.”

As opening night approaches, the team are waiting in anticipation to get into the studio space. Tom tells me: “Obviously when we’re doing runs in the Humanities Studio or Avon Studio it’s really bare. I’m really excited to see when the lighting and tech and the acting all comes hand in hand and it just becomes this almost overwhelming experience.”

Tash explains: “It’s always so exciting in the final days before the show to get into the space. That’s when it changes into your specific take on how to use the studio and all the things that we’ve been planning come together.”

I think we’re taking How to Disappear Completely as a play to the max, which I’m really excited for

But this isn’t just a collaboration between WUDS and Tech Crew; Selwin explains that it’s been important to him to cultivate a collaborative approach throughout the entire process. He says: “A lot of the ideas and decisions have come from the actors. I’ve made sure that this has become ours, as opposed to me and my Assistant Director, Hattie, making decisions and telling them what to do. There’s been a lot of: what do you think? What kind of atmosphere do you want to create? We’ve just been blocking the final scene and I got everyone to kind of write down their ideas for what they want to do. That’s been the highlight: we’ve had a lot of fun. It’s been very collaborative and fun and exciting.”

He goes on to say: “It’s a really great play. Everyone is working really hard, everyone’s at the top of their game, which is just so fantastic. And to see all of these elements that everyone’s working really hard on come together is so exciting. I think we’re taking How to Disappear Completely as a play to the max, which I’m really excited for.”

If you want to experience something exciting, close and raw, come to this show

Tom echoes this sentiment, saying: “I think people should come and see the play because as Selwin rightly said people have been working so hard on it. It’s obviously a WUDS and Tech Crew collab so it’s hopefully going to be somewhat of a spectacle.”

Tash is quick to add to this, explaining: “This is something where students will walk into the studio and think ‘woah, okay this is what I’ve come to see’ and really be transported into this world. Again, Tech Crew and WUDS collabs don’t happen very often so its really exciting that that’s happening again.”

Selwin concludes our discussion with a compelling motivation to see the show: “If you want to see a show and just be transported away, if you want to experience something exciting, close and raw, come to this show, because I think it’s going to be really exciting.”

How to Disappear Completely and Never Be Found is at Warwick Arts Centre from Wednesday 29 January to Saturday 1 February. Tickets are available here.