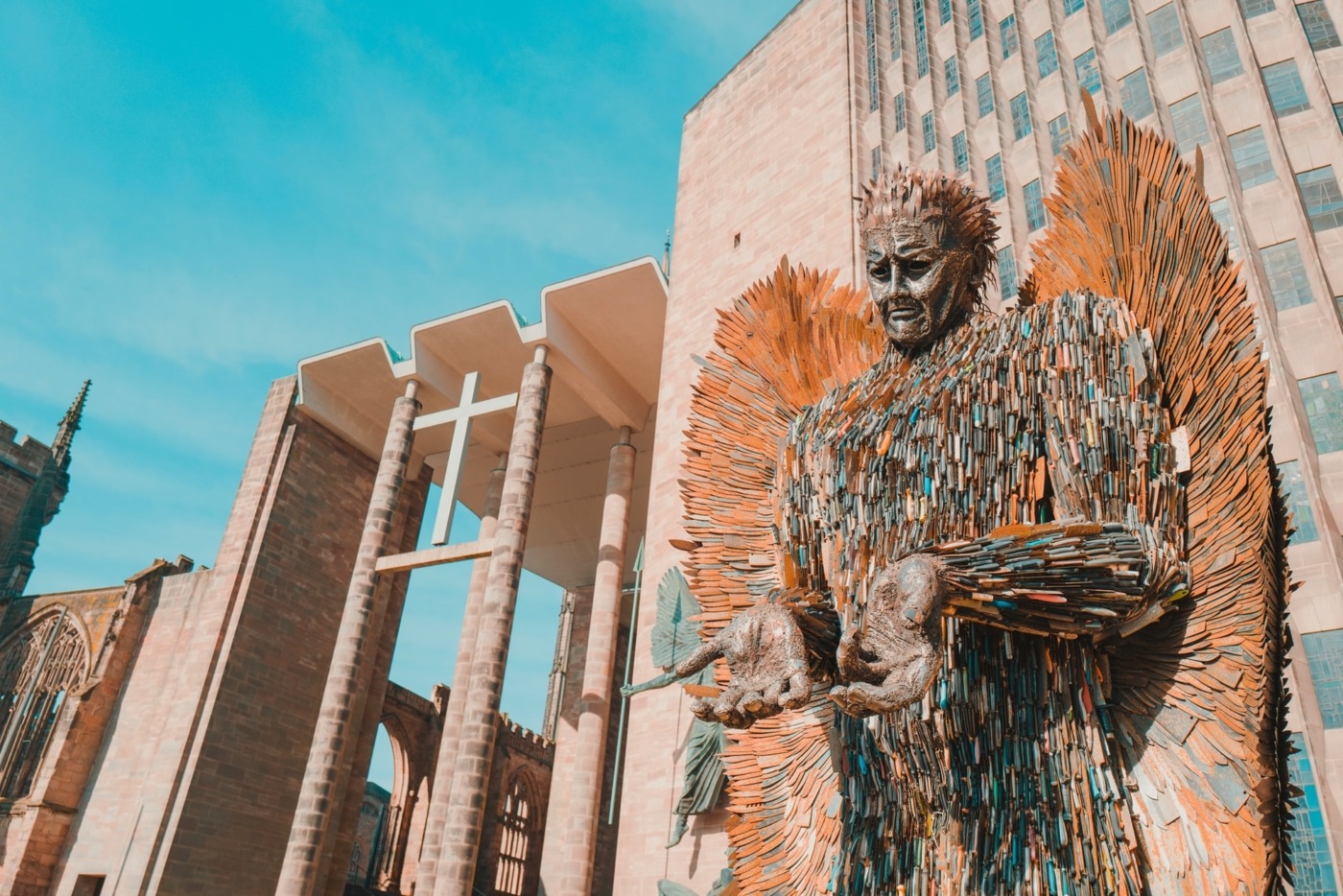 Etch & Pin is a local family-run business that makes pins and other memorabilia celebrating Coventry. For that reason, I decided that its founder, Aaron Ashmore, would be the perfect person to interview for the first in our series ‘Catch up with Coventry’.

The announcement of Coventry as City of Culture was a really important moment for Ashmore. He tells me: “I was sat at home the day that it was announced that Coventry would be the 2021 City of Culture, and as I was watching all these people waving their flags in the air I felt I wanted to be part of it and to bring something to the table. So I started the company and we launched the ‘It’s a batch’ badge, which is our most popular badge and a tongue and cheek way of celebrating the city. I wanted our badges to be a badge of honour to show that people are proud of Coventry.

“From mid-July 2018 I had sketches that I’d prepared that all celebrated the city, whether that was through landmarks, buildings or attractions. The idea is to release one a month, but we’re currently on hold. I did a full year – 12 badges – and now we’ve paused for a few months because I didn’t want people to grow tired of them, the idea is that they’re special.”

Etch & Pin offers two purchase options: a subscription service or the opportunity to buy the badges as one-offs. Ashmore explains: “If you want the surprise you’ll get the badge through the post on the first of the month. People don’t get as much post as they used to, and now it’s all just leaflets, so I like the idea of something coming through the post every month that’s a complete surprise. I like bringing in that retro feel of when we were younger, and with our sticker album and jigsaws I’m really trying to connect us back to our youth. I was always sketching when I was a kid, and I like puzzle solving and feeling like you’ve completed a set, so that’s all reflected in our products.”

Ashmore plans to start releasing products again soon to add to the build up to Coventry’s year as City of Culture. “I think the idea going forward is that in the next few months I’ll start releasing badges again, which will then take us into 2021.”

The concept of work-life balance was an important factor in the creation of Etch & Pin. Having studied Marketing at university, Ashmore worked his way up through the NHS. “When I started I worked in a junior role, and I worked through the ranks to head of Communications in Coventry. But I’ve got two young boys and I didn’t feel my work-life balanced like I wanted it to. As you move up obviously there’s more expectation and more responsibility, but that wasn’t what I wanted.

“My wife and I have a few businesses now. One of those is a marketing company in the city to help small and growing businesses. We’ve got Etch & Pin, and then we’ve also got a wedding business for pocket watches that you give to your groom when you get married.”

“Coventry is definitely a city on the up, and I think with that will come extra pride”

Ashmore was keen to emphasise the value that creating your own company can pose to students. He tells me: “If you have an idea for something that you think could be popular you just have to try it.

“We’re in the age of the internet and that makes getting your work out there easier. If people have an idea they should just give it a go – don’t take up your life savings, but put in some time. I do think that there’s something important in trying to create things that people will want to buy because then that sets you up for after university,  you may have an established brand that you’re working on alongside your studies that you can focus on after graduation.”

One of the reasons I wanted to start the ‘Catch up with Coventry’ series is to combat the idea that Warwick students don’t particularly like the city, and when I put this to Ashmore he told me that he had experienced a similar phenomenon. “In the past I think people have always whispered that they’re from Coventry, it’s not really something that people are proud to say. But now the spotlight is really on the city – there’s so much regeneration going on. Coventry is definitely a city on the up, and I think with that will come extra pride for people to say they’re from here or they’re here for their studies.”

“For me, this is obviously the place I was born – this is the place where my family has grown up, we’ve got a deep history in this city. If you take a walk around Coventry you’ll see so many different things, the Cathedral probably being the most famous. There should be passion and pride for being in this city. I hope that 2021 will be a good time to show people how far Coventry’s come and how far we’re going. Lots of the regeneration and movement in the city was happening regardless of the 2021 bid. There will be lots of things that happen because of 2021, but it hasn’t all started because of that. We’ve been a city on the up in the last few years and we should be proud of that.”

For Ashmore, reinvesting some of the profits from Etch & Pin into the city is important. He explains: “For every badge that we release we give £1 to a different charity for that month. That’s been really important for me. It’s a real eye-opener because these charities that we’re trying to support are small, family-run charities. I always try to go to the charity to experience their work for myself.”

“We worked with Coventry resource centre for the blind – they’re a great community charity. I’ve done work with Shine A Light as well. They’re a charity that looks to support the families of children with cancer, which is obviously a really worthwhile cause. There’s so much work going on behind the scenes that people might not necessarily realise is there, and donations, however big or small, will make a big difference to them.”

It seems to me that Etch & Pin has been remarkably successful in the 18 months since its conception. In fact, I was surprised when Ashmore told me that the company had only been founded midway through 2018. Their success is amplified by the fact that he was recently awarded Role Model of the Year at the Midlands Business Awards for his work on the company. Personally, I think a business that celebrates Coventry in a fun way is a brilliant initiative to make people excited for the city’s year as city of culture.

Crushing creativity: the testimony of a young storyteller