The necessity of politicising children’s books

Kate Milner’s most recent publication It’s a No-Money Day has caused some commotion in the usually soothing and serene world of children’s books. Following her prize-winning book My Name is Not Refugee, the author has chosen to illustrate a little girl and her mum’s trip to a food bank somewhere nondescript in Britain. Narrated by the daughter, both young and old readers experience dramatic irony as the mother continually shields the protagonist from painful truths: “There’s no more cereal, so I have the last piece of toast. Luckily Mum isn’t hungry,” the girl says. As Guardian columnist Aditya Chakrabortty puts it, we are quick to realise that “the biggest thing Mum will have for breakfast is her own little white lie”.

Although Chakrabortty recognises Milner’s “compassionate” handling of this delicate subject, he quite scathingly labels the book as “a grim sign of our failure as a society”. I wholeheartedly agree that it is a tragedy and a disgrace that severe child poverty even exists in one of the richest societies in human history. However, I don’t believe that children’s books should be restricted to “small worlds where kids could dream about farmyard animals and cuddly monsters,” something Chakrabortty seems to pine after. More than 4 million children live in poverty in the UK today – or nine kids in every classroom of 30. This figure is expected to increase to 5.2 million by 2022, meaning that statistics have doubled since 2010, where 2.3 million children were declared destitute.

Whilst Chakrabortty is obviously not blaming Milner for this heart-breaking societal shift and his criticism resides principally with the failures of political figures such as David Cameron or Michael Gove, he does not necessarily commend her for her work. He is contemptuous of her evident attempt to encourage parents to tackle difficult subjects with their children through books, but more importantly he misunderstands her work as a sign that we are no longer fighting against but instead accepting mass destitution as a part of British life. In his eyes, It’s a No-Money Day reduces the problem to something you simply “explain to your child as he or she nestles in your lap”.

This view is delusional. Milner’s work does nothing but underpin the severity of austerity and the impact it has had on Britain. Last year, the Trussell Trust’s food bank network distributed 1.6 million three-day emergency food supplies to people in crisis, (a 19% increase on the previous year,) and more than half a million of these went to children. With such a large proportion of young people visiting food banks on a regular basis it has become crucial to represent these children, as well as educate those who are fortunate enough to see their parents do the weekly food shop at the local Tesco.

I am not suggesting that we should bore primary school children with books about the ins and outs of the upcoming general election or debrief them on the Chancellor’s budget, but many of modern society’s issues directly concern these youngsters and they deserve to be informed. Milner is not alone in her crusade: Martin Dorrey and Tim Wesson’s work Kid’s Fight Plastic, largely a solutions-based book to combat society’s excessive use of plastics, was published this summer. Dorrey asks his young readers to do things like monitor their family’s plastic bag usage as well as what their parents buy at the supermarket, or something as simple as picking up trash and litter when you see it. This book is just a way of helping children to understand the depressing and multifaceted reality of climate change without panicking or overwhelming them. The tone, much like Milner’s work, remains realistic and optimistic, and attempts to offer feasible solutions suitable to the reader’s demographic. A 2019 study found that teaching 10-to-14-year olds about the environmental crisis oftentimes led to a direct change in the parents’ views on the subject. This is proof that engaging in serious conversations with children is not damaging but instead constructive and indicates that things could still change.

Children are not stupid, and we shouldn’t incessantly try to shelter them from books that reveal the harsh reality of their world. Milner’s book not only enables Britain’s poor children to be seen and to identify with a literary protagonist, but it also offers our youngest minds an opportunity to become more compassionate, understanding, tolerant and altruistic human beings.

Children can process difficult truths, and even make a difference down the line

In contrast to Chakrabortty, Milner and Dorrey’s narratives give me hope. Whilst it is a disheartening thought that our children are growing up in a world this bleak, we are finally teaching them that the real fairy godmothers of British society are the Extinction Rebellion protesters, or the charitable souls who dedicate their lives to providing those below the poverty line with the bare necessities. I wholeheartedly believe that children can process difficult truths, and even make a difference down the line, as long as they’re given the right context and room to think about them – and where better to start than with a bedtime story. 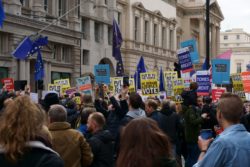 The Brexit picture book for children