The calls were reported by The Guardian, in an article which noted that many international students crossed picket lines to attend classes during the two-week strike period in fear of failing to comply with the attendance requirements of their visas. The article claimed many of these students fully support the strike.

Tens of thousands of university staff across the UK have walked out in protest over pay cuts and increased pension costs.

The strike has also attracted many students to join the picket lines in solidarity with their professors to fight for the betterment of their working conditions. However, many international students crossed picket lines regardless of their personal views.

In most cases, if an international student misses 10 teaching sessions, the university is obliged to report them to immigration authorities.

According to the UCU, any absence caused by the strikes should not be included on student records.

– A University of Edinburgh international student

However, if a Tier 4 sponsored student (a student from countries outside the European Economic Area or Switzerland) misses a lecture by a non-striking staff member in order to show their support, this would be considered an unauthorised absence.

One international student studying Law at Edinburgh University stated: “I would love to be able to act in solidarity with the strikes but because of my visa I have no choice but to cross picket lines and attend classes. This leads to quite a bit of guilt and anxiety, as I worry that I’m undermining the pickets by continuing to attend classes.”

This response was echoed by a PhD student at Exeter University: “As an international student, I’m required to somehow have my attendance documented. However, I can’t, as my supervisors were busy at the start and now are striking.”

He went on to mention that many were feeling “pressured to cross the picket line” due to the fear of having absences on their records.

Seventy student activist groups and unions have since issued a statement in solidarity with the UCU’s strike action which urged university managers to cancel all student attendance registers on strike days, including classes held during the strike period.

Within the statement, the groups argued that “monitoring migrant students’ attendance on strike days amounts to the cynical use of students’ visa precarity against workers’ right to industrial action”. 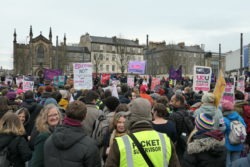