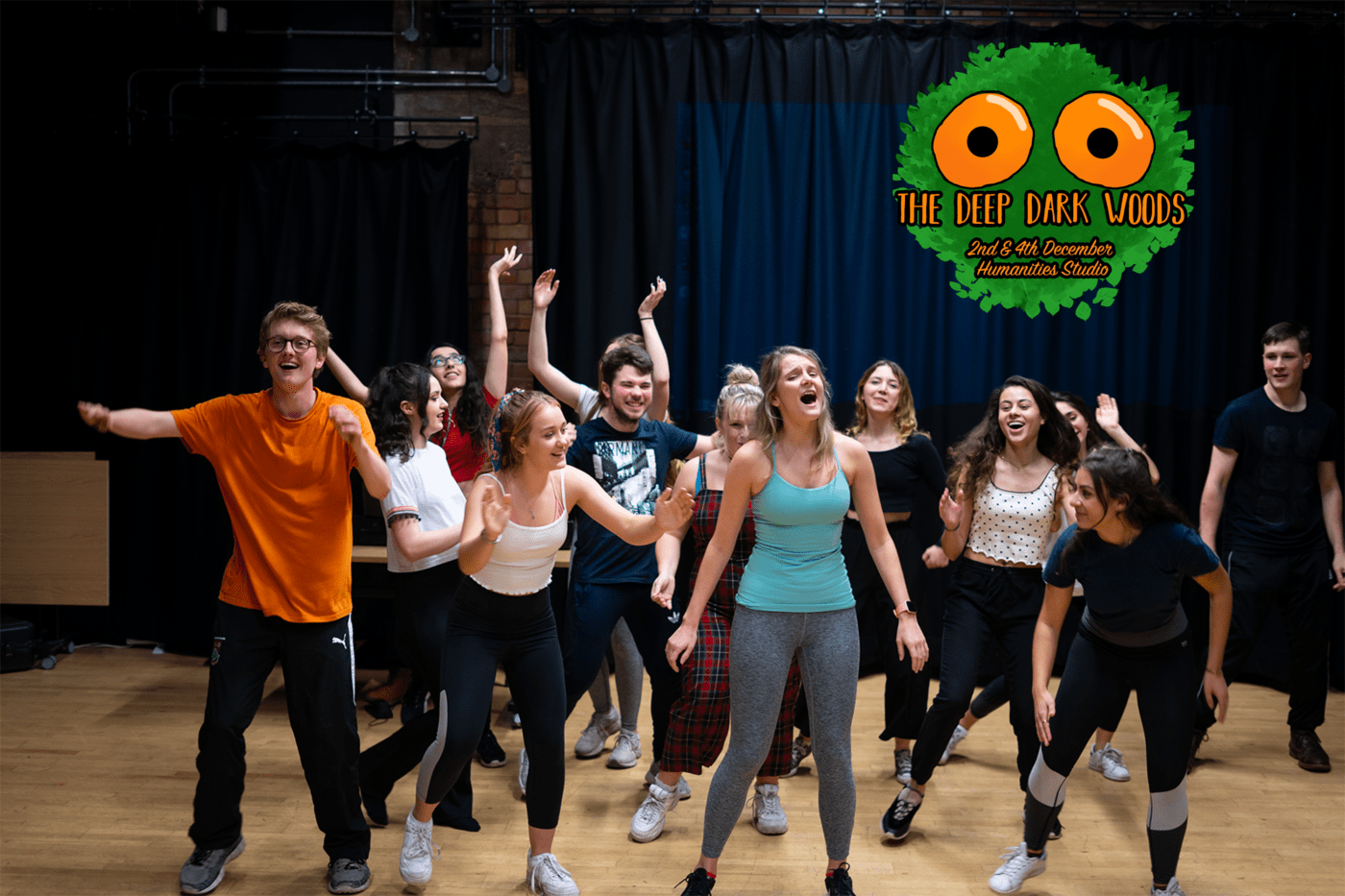 Not for the first time, last night I stepped into the familiar space of the Humanities studio to review a student production. Music Theatre Warwick’s The Deep Dark Woods, to be precise. The show is a musical adaptation of the children’s book “The Gruffalo.” As a chap who used to enjoy the charming tale a long time ago, I am delighted to say that I found the re-imagining of a story that most of us are fairly familiar with to be very enjoyable. The songs were a good laugh, the music was very pleasant, the actors poured their hearts and souls into each individual role and the choreography was none too shabby either. Actually, that understatement is just my attempt to incorporate an amusing tone into this review – the choreography was actually pretty damn good.

The story follows Mousey (played with energy and charm by Lucy Parfitt) who is sent away from their idyllic woodland community by their Mother (Emily Rose-Wilkinson) and Grandma (Charis Winter) in search of food following an emergency shortage of nuts. Indeed, the themes of environmentalism, sustainability and the need to maintain a harmonious relationship with the natural world were apparent right from the get go, with Mousey eagerly rapping “In the woods we can’t survive on our own.”

As Mousey travels the titular deep dark woods they encounter three menacing (and hilarious) rogues who themselves are looking for a meal. The cunning seductress, Fox (masterfully performed by Alice Eve) the flamboyant and loquacious Owl (played with perfect comic timing by the talented Jack Dalton) and last, though certainly not least, the egomaniacal hiss-sterical (I’m sorry) Snake (brilliantly performed by Bethan Hughes). These three dastardly villains provided many of the laughs throughout the show as their bungling attempts to devour Mousey and his friends are foiled by their terror of the Gruffalo.

Speaking of which, it wouldn’t do to continue this review any further without taking the time to praise Will Hall’s beautiful portrayal of the good-natured beast. Awkward and abrasive, nervous and opinionated, Hall flitted between all of these states in a manner that was not only natural but entertaining as hell. He fully embraced the role of the socially inept vegan monster who reluctantly agrees to educate Mousey and the rest of the woodland creatures on the importance of sustainable living.

Other performers who should certainly be credited include Tia Tokalty and Will Roberts, who played Mousey’s comedic counterparts and childhood friends Joey and Jack respectively. The ensemble also deserves the chance to be congratulated, they complimented both heroes and villains alike throughout many wonderful musical numbers and kept the energy high and the atmosphere light-hearted (except for one major scene which I wouldn’t dare spoil). So, congratulations Tara Noonan, Arianwen Herbert, Fatine Velicitat, Amelia Hibbert and Adi Haroush (I hope that it works about with Mr Johnson).

Of course, we cannot leave it at that, can we? Not without taking the time to credit the two ingenious co-writers and directors, Vikram Grover and Sophia Holmes, who clearly conveyed their vision for a more political, though still family friendly and enjoyable, interpretation of the classic children’s story. The musical director, Farbod Salamat-Zadeh, did a very effective job incorporating the numerous songs into the narrative. The two movement director and choreographers, Stanley Tidbury and Vicky Basterfield should be commended for orchestrating compelling and visually engaging dance number after dance number with a sizeable cast and ensemble.