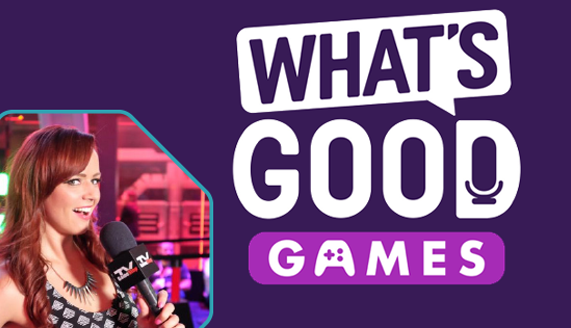 How they levelled up: Andrea Rene – What’s Good Games Host

There is no failing. These words have defined the decade long career of Andrea Rene, her drive and work ethic appropriately earning her the title of ‘Busiest Lady in the Business’. She has cut her teeth in Hollywood and put her all into chasing her dreams. Thankfully, in the midst of moving house, she managed to find time to sit down with me over Skype so I could learn more about the career that blossomed from childhood aspirations.

Andrea calls herself a “digital media producer”, a short title to describe her job to those not well versed in the medium. A slightly longer summary would be to call her an on-camera reporter, host and public speaker for tradeshows and conventions. You will most commonly find her moderating panels or on her YouTube channel What’s Good Games, streaming ‘let’s plays’, and as part of the crew’s weekly podcast.

In many ways this is the life Andrea always longed for, albeit in a medium she could never have imagined. At a young age she wanted to be Mary Hart, the former host of Entertainment Tonight, but as Andrea progressed through school this idea morphed briefly into journalism. She became Editor-in-Chief of her high school’s newspaper and received a BA in journalism from the University of Minnesota. Though she would find herself pivoting back once again.

“I really loved performing and I loved broadcast. So I knew that that’s where I wanted to go. But after spending some time doing hard news, I realised that I just wasn’t that passionate about doing investigative work.”

During her final year of university, Andrea spent time studying in Los Angeles, learning about TV and radio production from some of the best in the industry. Here, her love for entertainment was reignited, growing even stronger than before. So, upon finishing her degree, she returned to LA and fell into hosting. “I discovered that there were a lot of on camera reporting opportunities that allowed you to be yourself and talk about fun things like lifestyle, or food, or even really wild off the wall things like a dating show I hosted early in my career.”

Though, whilst Andrea adored the opportunity to chase her dreams, her parents were more hesitant at the thought of their child trying to make it big in Hollywood. “I remember before I was supposed to leave, my car was all packed, [my mom] had planned to go out for dinner and [she] was like, ‘so how many years are you going to give it before you think about moving back home?’”

“I said, ‘Mom, there is no moving back, there is no failing, this is what I have wanted to do since I was five years old and asked you for an agent. I’m not giving up.’”

But in these hard times, between late-night bartending shifts and sending out resumes during the day, Andrea fell back into a childhood passion of hers, video games. During college, to focus more on her studies and other interests, Andrea had found herself with no opportunities to play and left gaming behind. However, with more free time on her hands while job searching, she returned to the hobby her dad introduced her to when she was eight and did so in a hardcore way. Andrea dove headfirst into the Xbox 360 generation and committed herself as best she could.

I was producing seven to ten short form videos a day

In 2008, at the height of the recession caused by the banking crisis, Andrea made her first professional move in the gaming world. Whilst trolling through Craigslist, as she did everyday, Andrea saw an advert looking for a reporter to send to E3, the biggest gaming event of the year. As many in her position would, she jumped at the chance and later found herself with a press pass at the event. Unpaid, but at E3 nonetheless. From that moment, Andrea knew she had to do more.

From then Andrea jumped around, finding one-off work where she could. Her first full-time job came from thisweekend.com, who hired Andrea to host a regular video games show. Andrea also found herself being hired to work for their tandem company Mahalo Video Games at the same time.

In these early days, across all of her jobs, the hours were long and the workload constantly changing. “When I was in my prime at Clevver Games, I was producing seven to 10 short-form videos a day, it was just a tonne of work. Between researching the story, pulling the graphical assets, working with the editor to make sure the video was cut properly and then doing the actual upload, writing the metadata, creating the thumbnails, doing the company blog post. I’m glad to not be doing that anymore.”

“When you work in the entertainment field, you really are mercy to what’s popular at the moment. I spent a lot of my time researching trends and looking at programming, seeing what was popular, looking at channels that were being successful, why they were successful, and cutting my teeth into what SEO (search engine optimisation) was.”

Her success at mastering the YouTube algorithm has helped Andrea’s career to this day. Finally with What’s Good, already armed with invaluable knowledge of past endeavours, Andrea is free to just talk about what she wants, fulfilling the biggest draw to her of being a host. Being yourself, being able to follow your passions and being able to produce content that your fans actually want.

“’Instead of doing seven to 10 news stories a day, we get to do a two-hour long podcast where we get to pick the stories that we want to cover. Whether it’s two or 10. And for me, it’s much more of a passion project to be able to create the show that I want to create and that I enjoy working on versus, ‘hey, we have to make this style of content to get X amount of views, to get Y amount of money to pay for this much staff.’ We just have to care about the content and care about what our audience wants.”

By making the content their audience wants, Andrea and the What’s Good crew have seen the impact their show has had on the gaming landscape. The show was not born out of an idea that an all women’s podcast was needed, instead it was for a group of friends and professionals to talk about games together. “We want people, first and foremost, to remember that we have over 30 years of combined professional video game experience from all different aspects of the video game business. We hope that people appreciate and love our show for that.”

There is an immense amount of competition

Though, their drive to produce quality content has found the group sparking a ripple effect, inspiring other marginalised communities in gaming and having the What’s Good Games community rally behind the voices that we do not always get to hear but absolutely should.

Andrea has fought hard and come out the other side. She knows what it means to really chase your dreams with everything you can, to be “an overnight success in five to 10 years.” My interview with her was full of inspiration, including the advice she has for anyone who wants to work in any aspect of the games industry – “to be passionate.”

If you want to check out more on Andrea Rene you can find her on Twitter @andrearene and at whatsgoodgames.com. You can read our last interview with Eurogamer reporter Emma Kent here!