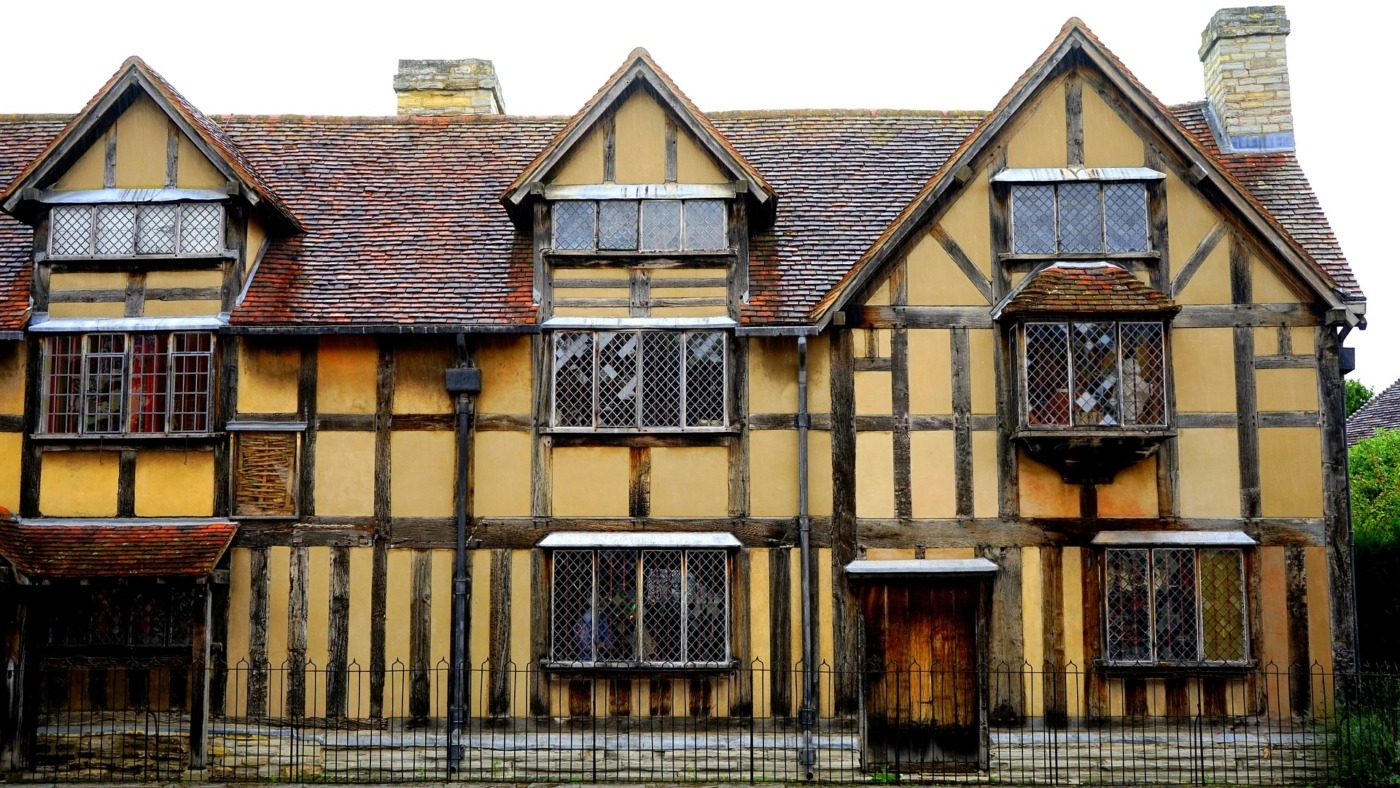 I have never been the sort of chap that copes very well with travelling. Even the brief ride from Leamington Spa to Stratford-upon-Avon was enough to leave me hot, disgruntled and in desperate need of a good meal. Once I arrived at Henley Street however, I found these cumbersome, whining thoughts take flight from my mind. It is a truly magical location, more like a giant, immersive museum than anything else – only one stocked to the brim with charming little bookshops, restaurants and (to my bemusement) a table tennis table.

I stopped off at a delightful restaurant called Bensons and ordered myself a thoroughly enjoyable cream tea. To the wonderful waiter who hurt his foot whilst serving me – thank you for your hospitality. It was the ideal prologue to my evening of humour and mischief.

Then I walked into the newly opened Will’s Kitchen that was to be the starting point of my journey, both literal and meta-physical, to the birthplace of the bard and deep into the past of the greatest playwright that England has ever known. Poking my nose through the door, I felt like I was joining some sort of secret club. My name was taken at the door, I was provided with a wristband and a complimentary drink that was more than welcome.

As I took my seat and proceeded to snack on the nibbles that were dutifully provided, I found my eyes being drawn to three large television screens hung on the walls. These television screens showed snapshots of Henley Street from the past. Or at least, that’s what they first appeared to be. After a few minutes of comfortable food and drink these images dissolved into garish lights and we were interrupted by two spectral figures bickering outside. My night was just getting started.

The door was thrown open and a squabbling Ariel and Puck entered the venue. Only, these were not the characters that any good Shakespeare buff would know and love. Ariel (played by Megan Vaughan Thomas) was an emotionally unstable worrywart, who did her best to navigate the myriad of eccentric, historical characters that cropped up in this immersive piece. Puck (played by Saikat Ahmed) was still a trickster and a bumbling one at that, but this interpretation of Puck was a sex maniac, a wannabe party boy and a drug user to boot – a sort of magical combination of Ali G and Jay from the Inbetweeners.

The premise of the evening’s entertainment was simple enough. Whilst in the middle of an argument with his fairy-enchanted counterpart, Puck makes a wish that changes history by stopping the bard from ever being conceived. This then prompts the two bungling servants to go on a quest to uncover the mystery behind Shakespeare’s parents and see to it that they (*cough*) “do the deed” that culminates in the birth of good old Bill.

We (the audience) were divided into two teams and were assigned a fairy to follow up and down Henley Street in order to uncover bits and pieces of information on Shakespeare’s parents. This is how we were introduced to David Garrick (played with pompous and comical energy by Andrew Kingston) who boasted about how he “revolutionized London’s stages with my acting style”, whilst providing us with little nuggets of information about John Shakespeare the glove maker and businessman.

Garrick was not the only historical character we met that was “long bitten by the bug of Shakespeare’s fever”. Following this encounter, Ariel ushered us over to Mary Hornby (played by Lucy Harrington) whose bizarre attempts to channel the spirit of Shakespeare and shrill bickering with the black veiled figure of the Widow Court (played by Victoria Agache) from opposite ends of Henley Street had me in stitches. From there, both Ariel and Puck’s groups reunited to converse with the eccentric and exquisitely dressed Marie Lorelli who, standing in the shadow of an imposing statue of the bard himself, proclaimed that “our hearts, our souls crave beauty”.

From there we approached the birthplace of William Shakespeare, wherein a modern house party full of raves and dirty dancing was taking place. Our mission was simple: do whatever it takes to help John and Mary Shakespeare move past the recent deaths of their children enough to rekindle their passion and, well, carry out the necessary actions that would culminate in the birth of William Shakespeare.

The time we spent in what was once the largest house in Henley Street proved to be the highlight of an already fantastic evening. Weaving from displays of farcical silliness – such as Ariel using a combination of magic and dance to seduce John Shakespeare, in an attempt to make Mary Shakespeare jealous – a ploy that of course falls flat on its face. To moments of startling, gripping intimacy and nuance. A far cry from the comedic errors of the two fairies desperate to, in Puck’s own words: “give them a nudge to get them back on track.”

This scene perfectly navigates through the contrasting coping mechanisms of Shakespeare’s parents. Mary (played by Charlotte Ellen) who could not let go of her grief, toying with the diminutive clothes of her deceased child and asking, “Do you think she’s in heaven?” Whilst John (played by James Leighton) pleaded with his wife to overcome her sorrow “I want to see you dance, Mary”. It was a scene that knew precisely what heartstrings to pull and was superbly performed.

Of course, unlike many of Shakespeare’s works, this performance had a happy ending. The two fairies decide to reveal themselves to the Shakespeare’s and warn them of the detrimental impact that the erasure of William Shakespeare from history would have, especially on Stratford-upon-Avon. John and Mary, overjoyed by the news that their next child will definitely survive, exit to spend a passionate night together. Drawing upon Puck’s final speech from the original A Midsummer Night’s Dream, the two magical creatures bid us all farewell, before bringing the whole cast together for one final bow.