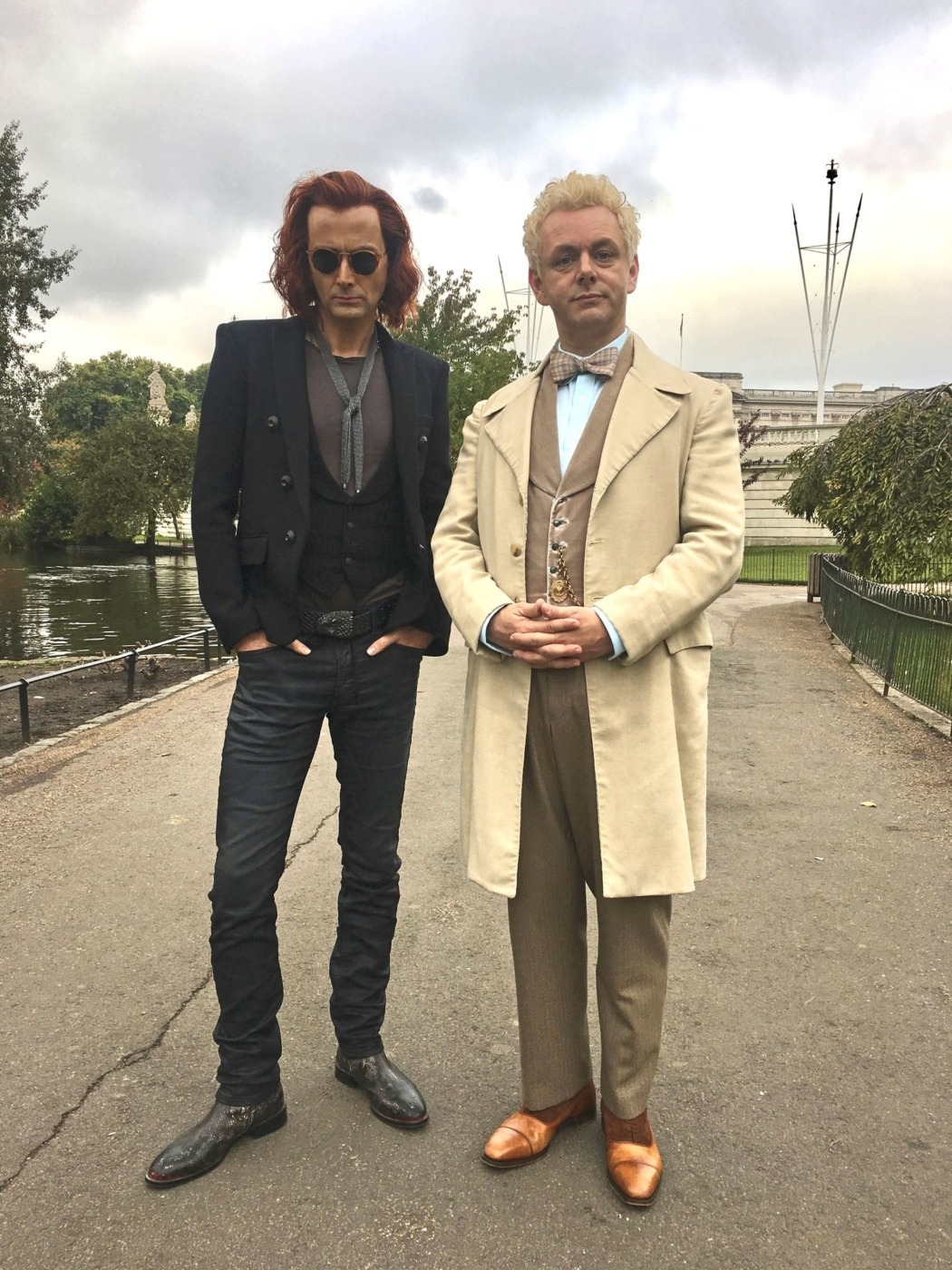 Good Omens, Terry Pratchett’s collaboration with gothy longhair Neil Gaiman, is perhaps my favourite book of all time. The novel, which began life as an affectionate parody of Richmal Crompton’s Just William books under the provisional title William the Antichrist, reads a little like the Book of Revelations as penned by Monty Python’s Flying Circus. Indeed, Python alumnus Terry Gilliam once unsuccessfully attempted to make a film out of it. When it was announced earlier this year that the classic and “unfilmable” book was getting the television treatment it finally deserved, it seemed as big as TV news got.

(Tennant has) the perfect combination of swagger, eccentricity, and borderline drunkenness

In the new Amazon/BBC mini-series, Michael Sheen and David Tennant shine as an angel and a demon on a comical campaign to keep the world from ending. Tennant’s portrayal of the demon Crowley, the sunglass-wearing angel who “did not so much Fall as Saunter Vaguely Downwards”, is absolutely superb. His performance is the perfect combination of swagger, eccentricity, and borderline drunkenness, which is reminiscent of Bill Nighy in Love Actually and, in my opinion, captured the character’s essence to a tee. Sheen too is wonderful, countering this bravado as the awkward and prudish angel Aziraphale. Both actors fully commit to their roles and it is hard to imagine better casting, not least because they gamely wear multiple silly costumes.

The co-production between the BBC and Amazon also benefited from piquant performances by veteran actors. The great Bill Patterson is at his bemused best as the exasperated Mr. R. P. Tyler, and Derek Jacobi, no less, has a cameo as God’s Spokesman, Metatron (not to be confused with the leader of the Deceptions, an easy mistake to make if your name is Pepper Galadriel Moonchild). Michael McKean and Miranda Richardson are also supremely fun to watch as the aging witchfinder, Shadwell, and his accommodating landlady, Madame Tracy. Jon Hamm of Mad Men fame also nailed every fleeting moment he had as Aziraphale’s Armageddon-happy boss Gabriel. Although making only the occasional appearance, the show truly benefitted from his scenes.

The third episode’s pre-credit scene, which showed the co-conspirators’ meetings through the ages, was quite possibly the show’s standout moment. The amusing sequence runs a stonking 30 minutes long and follows the pair from an early run-in as Noah is constructing his ark (where we learn why the unicorn no longer exist), through to a rendezvous during the French Revolution. It also treats viewers to the sight of Crowley hopping over consecrated ground to save his friend like a person walking barefoot on hot sand, this funny moment in their history was in many ways one of the most endearing of the show. The pre-credit scene also features three of the four League of Gentlemen (Jeremy Dyson was nowhere to be seen), which is never a bad thing.

Gaiman, who wrote the six episodes himself (Pratchett died in 2015), streamlined the book which arguably was the wisest possible choice. It allowed the story to focus even more closely on the central relationship between Crowley and Aziraphale. The chemistry between the two is a joy and more than watchable. Furthermore, when reading Good Omens, one of the pleasures was delving into the variously illuminating, digressive, and absolutely ridiculous footnotes with witch Pratchett and Gaiman adorned their story. It was nice to see that a fair few of these had been incorporated into Amazon Prime’s adaptation.

Having read the book, however, it was disappointing to see that the four bikers who try to become a back-up to the “Four Horsepeople of the Apocalypse” did not make the final cut. These bikers become the four relatively minor inconveniences of the apocalypse with names such as Ansaphones, Things Not Working Properly Even After You’ve Given Them a Good Thumping, Cruelty to Animals, and No-Bloody-Alcohol Lager. This joke, which is bristling with genuine irritation, is one of my favourite in the fantasy novel and would have worked well on screen.

One of the show’s biggest shortcomings was the plethora of tissue-paper thin characters. This is particularly true of the female parts – Frances McDormand as the narrating voice of God and Anathema Device, the professional Descendant of Agnes Nutter, witch. This is often considered a historical weakness of the fantasy genre and one which Gaiman could have corrected.

Good Omens proved to be a hugely enjoyable and imaginative premiere, which remained as true to Pratchett’s vision as I could have dared dream. Although Douglas Mackinnon’s bringing to life of this whimsical book may not be for everyone, fans of the much-loved novel will surely be sated.