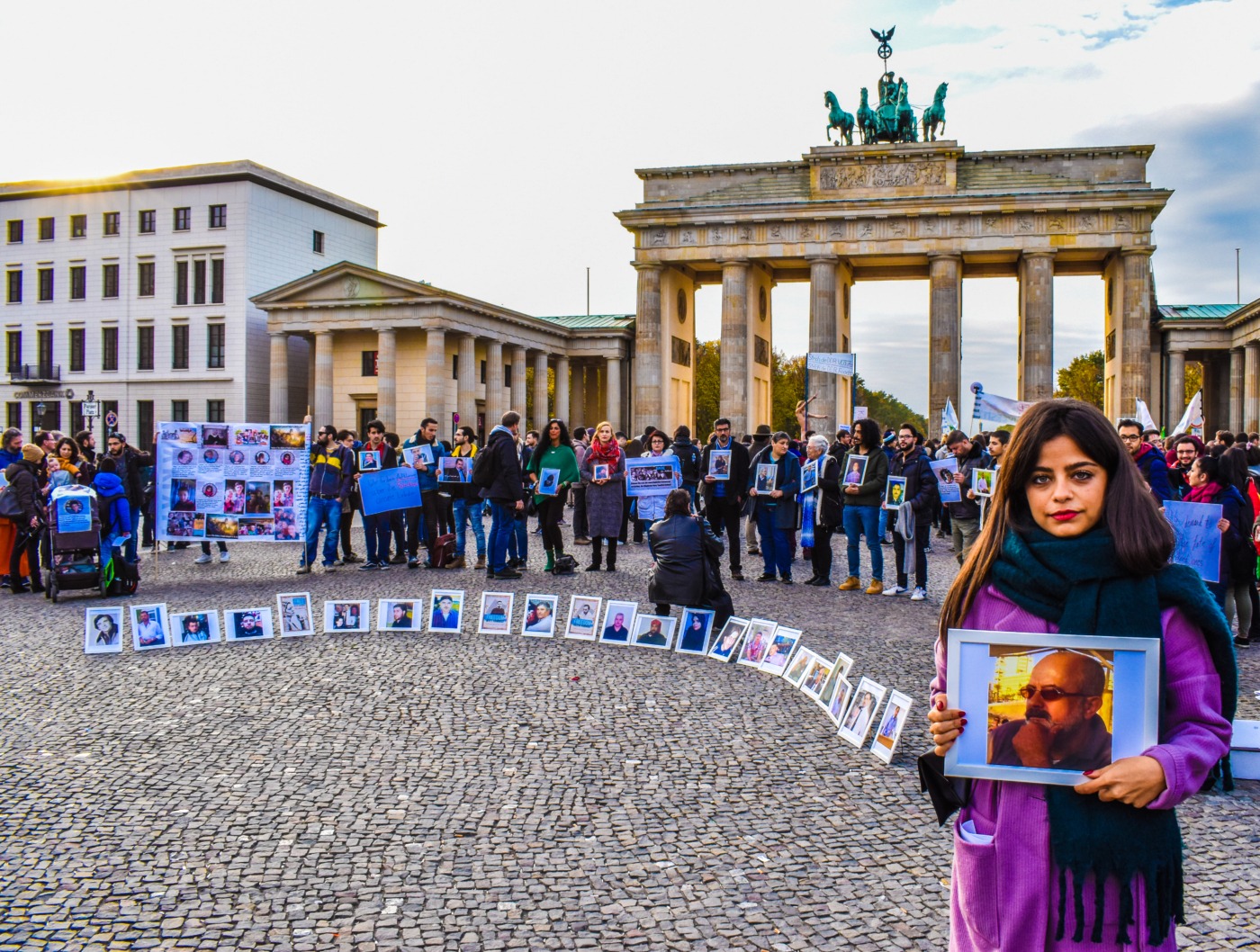 The photo above is one captured by Neville Lai, titled ‘Syrian protest in the sunset of democracy: the unattended stories of human right abuses’, which unveils a story that remained with him even after his travels in Germany.

The photograph captured Wafa, a Syrian refugee who Neville first met whilst walking through the streets of Berlin. “I wasn’t thinking about the competition at all to start with, it was just a coincidence. I was travelling by myself and I saw these people and I thought it would make a good shot,” he told The Boar last Thursday.

His photograph was announced as the winner of the Global Research Priorities (GRP)’s photography competition at this year’s Annual Postgraduate Conference, which is the biggest event of their year.

Sanna Vohra, GRP Administrator in International Development, explains: “Every year we base all our events and activities on an annual theme.” The theme for this year was The Politics of Hope – Reviving the Dream of Democracy and Development.

It’s seeing something through someone else’s eyes, it’s seeing the reality of what might not be said in the media

Sanna explains the importance of the competition to their project, saying: “It’s something to bring the community together – it gives a visual representation as well.”

She goes on to tell us: “These are such real problems going on around the world, and that’s why it’s so important to have these photos, because you really can see them. Neville’s photo was taken in Berlin – we don’t all have access to be able to go to these places. But also, it’s seeing something through someone else’s eyes, it’s seeing the reality of what might not be said in the media. It’s a way of making everyone aware.”

Neville reinforced the importance of travelling not only for himself, and being open to new experiences, but also the responsibilities of these new experiences and meeting new people.

By travelling to these places Neville is able to see, and in turn show us, the story of Wafa whilst sitting miles away with little to no knowledge of these happenings around the world.

The Brandenburg Gate is supposed to symbolise democracy, freedom and peace, but these people were protesting in front of it and no one cared

Wafa told him about the story of her father who had disappeared in 2013 during the Syrian Revolution. She fled the country with her family almost a week later. Despite their best efforts to uncover his whereabouts, he is still missing to this day. Her neighbours allegedly saw him being taken away by the government; the Assad regime and Wafa believe that he is being detained in one of the detention camps in Syria.

Asking Neville what pushed him to enter the competition, he said: “I wasn’t thinking about the competition at all to start with. It was just a coincidence. I was travelling by myself and I saw these people and I thought it would make a good shot.

“The Brandenburg Gate is supposed to symbolise democracy, freedom and peace, but these people were protesting in front of it and no one cared. So I approached them to ask what they were doing, and a girl, Wafa, handed me a leaflet and started explaining to me what happened in Syria, because she thought I had no idea. I actually did a module specifically on [the war in] Syria [when I was studying abroad in France], so it’s something that I really care about.”

Merely a traveller walking past a demonstration that was being ignored by bystanders at the location, Neville initially left after speaking to Wafa, but then “walked all the way back” to tell her that “this is something that I think I can do something about, I can tell my campus newspaper, and write something about it, and help to promote the issue – that’s the least I can do. So I took the photo, and we agreed to keep in contact”.

Neville insists that photography is a good way of raising awareness for issues such as these. We talked about the fact that a lot of news reporting is desensitised and has lost that personal connection – a connection that can be brought back by photos like Neville’s. He tells us: “I think photographs are about the message behind them and – like they say – a picture is worth a thousand words.”

Following this, we were interested to know to what extent the photo was constructed, and how much Neville had thought about the symbolism when taking it. He explains: “I just randomly stopped by the Brandenburg Gate, so [the symbolism] wasn’t an intentional thing [for me]. But at the same time, those people obviously protest there for a reason, because they believe that it symbolises democracy and freedom and peace, so it will help to get their message across.”

We take democracy and freedom for granted

Neville explained in his acceptance speech: “These people are holding their loved ones in hand who also disappeared during the [Syrian] revolution. Each picture represents a broken family.”

“As the Brandenburg Gate reminds us of peace and democracy when President Reagan famously chanted ‘Tear down this wall’ in 1987, today we remind ourselves of nothing but a sense of irony. The untold stories and plights of Syrian families draw little media attention because they lack the voice. Onlookers… still live their lives as usual.”

Neville explains this to us further in our discussion: “We take democracy and freedom for granted, then we look at these people – they don’t have a voice. They’re protesting all around the world and they have a ‘freedom bus’ that they stick all the photos of their lost ones onto, but it didn’t draw as much attention as I and they would hope. So, I took the photo because this is something I care about.”

Holding onto hope is hard but it exists somewhere

He is still in contact with Wafa, having been interested in the revolution and world development throughout his education, and regularly asks about updates of her father.

“Today marks 2171 days since my father was taken from us and disappeared in the Syrian regime’s detention centres. I started to count the days when he completed 300 days away from us, before that I always felt that my father is going to come back to us very soon,” Wafa writes back.

“2171 could be a number like any other number. But, in my thoughts, memories, heart and every single moment of my life, it’s a growing pain, and it’s a pain bigger than any pain.

“The reason why my father and thousands of fathers, mothers, sons, daughters, siblings, and friends are not there anymore. As the days of my father’s disappearance are increasing, the thoughts in my mind and my heart are decreasing. Holding [on]to hope is hard but it exists somewhere, and it’s the only thing that keeps me, and thousands of people like me still want to be here and continuing their journey somewhere.”

Neville believes that “the sun in the picture symbolises hope”, and ends our discussion with an equally hopeful message about the future.

He states that travel is “personal for me”, as he encourages others to consider speaking about their own experiences and raise awareness about events around the world: “I think maybe it’s something they should consider, and giving the option is important. So talking about my experience might inspire them to do the same.” ‘Syrian protest in the sunset of democracy: the unattended stories of human right abuses’ by Neville Lai