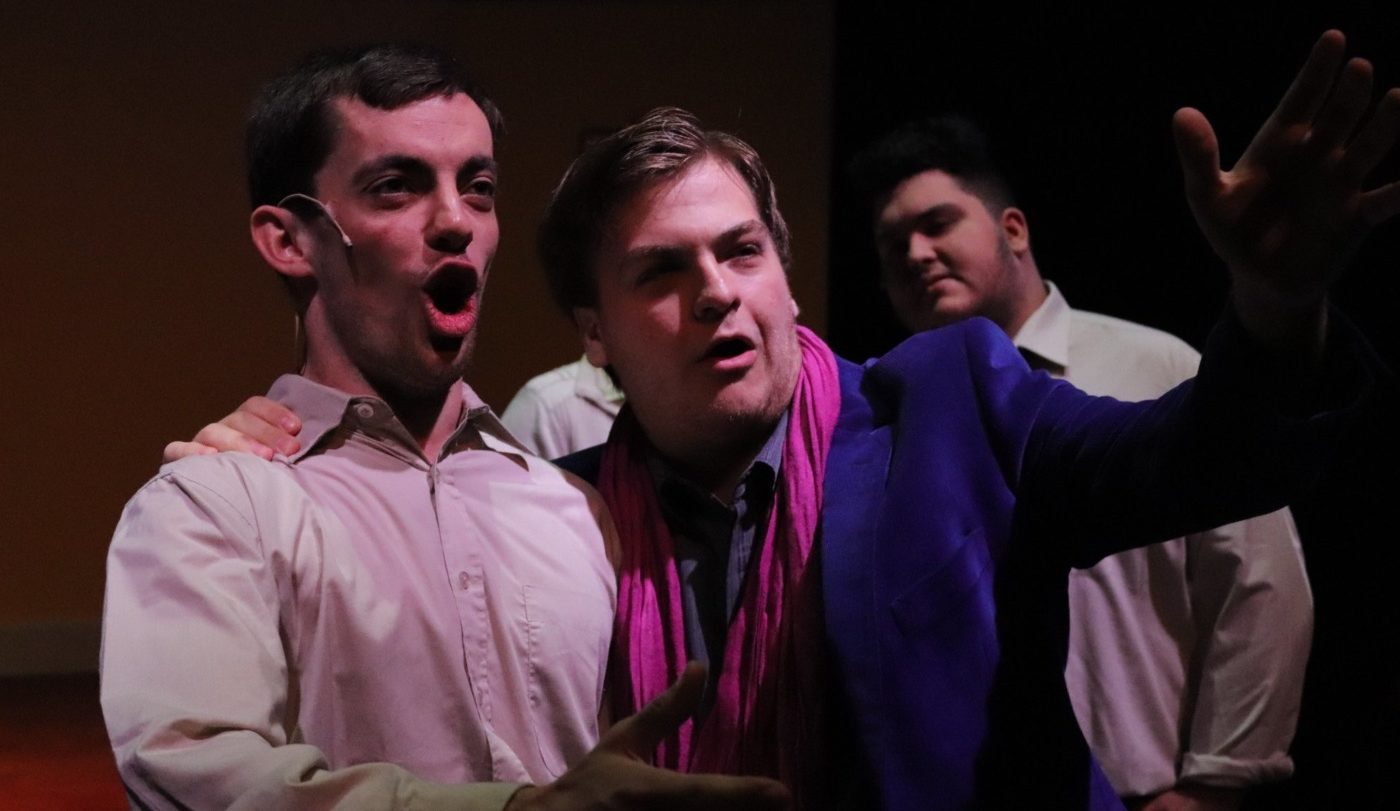 Walking into the arts centre last night to watch WUDS’ performance of A Chorus of Disapproval, I’ll admit that I wasn’t entirely sure what to expect. Having previously sat down with the cast to talk about the show, they told me that while being a comedy, there was actually a lot of emotion behind the laughter. To be quite honest, I wasn’t entirely sure about how that mix was going to come across on stage, but I’m pleased to say that the brilliant cast achieves this without issue.

For anyone who’s a fan of meta-theatre, this is absolutely the show for you. The small theatre is perfectly suited to the supposed am-dram show, and various small touches really add to that feel. I particularly appreciated being given a program for the Pendon theatre’s production of The Beggar’s Opera (although it did confuse a small number of audience, who thought they had walked into the wrong show). The scrappily painted scenery and very visible crew members almost make it feel as though you’re back at school watching a year seven play.

But make no mistake: the acting is definitely not of a year seven, nor amateur theatre standard. Performing a comedy is undoubtedly difficult, but the flawless cast had the audience laughing the whole way through. Joe Matty’s bumbling and awkward Guy Jones is a particularly recognisable figure, that he plays with the perfect balance of comedy and empathy. All the characters in the play are particularly distinctive, and I wish I had the word count to allow me to give each individual the praise they deserve, but instead I shall have to settle for saying that they were all superb.

What’s different about this show is that it is relatively stripped back. That means that, if the acting were poor, there would be nothing to distract from it (and we all know that poorly performed comedy is particularly painful). Instead, the simplicity of the show allows the actors to really shine in such a character-driven play. This isn’t a show that is made good or memorable by big sets or all-singing, all-dancing musical numbers, but by the sheer high quality of the acting from everyone involved.

That said, the musical numbers that featured were still wonderful. I think it’s easy to expect a potentially lower-quality of vocals when singing is involved in a show that is not advertised as a musical, but this is firmly not the case in A Chorus of Disapproval. The voices of Joe Matty and Lucy Chamberlain were delightful to listen to, and the characterisation of the choreography from all the cast members really added to the comedy.

I have to say that I was particularly impressed by Chamberlain’s tear-filled singing. I can only imagine how hard that must have been to do, but it made for a heart-wrenching performance in which you really begin to feel the tragic tone of the play. This is an absolute testament to Chamberlain’s acting ability.

To perform a comedy is hard enough, but to be able to flip back and forth between the comedy and heightened emotion as they do is impressive

But this change in tone must have been a challenging one for all the actors. To perform a comedy is hard enough, but to be able to flip back and forth between the comedy and heightened emotion, as they do, is impressive. There is one moment in particular where Guy and Hannah are going through an emotional break-up in the midst of a tech rehearsal, as their director continuously interrupts by shouting at their head of lighting (who I must add also gave a brilliant performance). This scene was, for me, both the funniest and most emotional in the play, and that constant undercutting of pathos and rising tension really engages the audience’s emotion at a critical point in the story.

By the end of the play, the performance has gone from something that has you laughing throughout to something from which you walk away feeling quite cold. There is certainly far more to this production than just being a simple comedy, and for that reason I would say that this is definitely not one to miss.

WUDS’ A Chorus of Disapproval is at the arts centre until June 15. Tickets are available here.