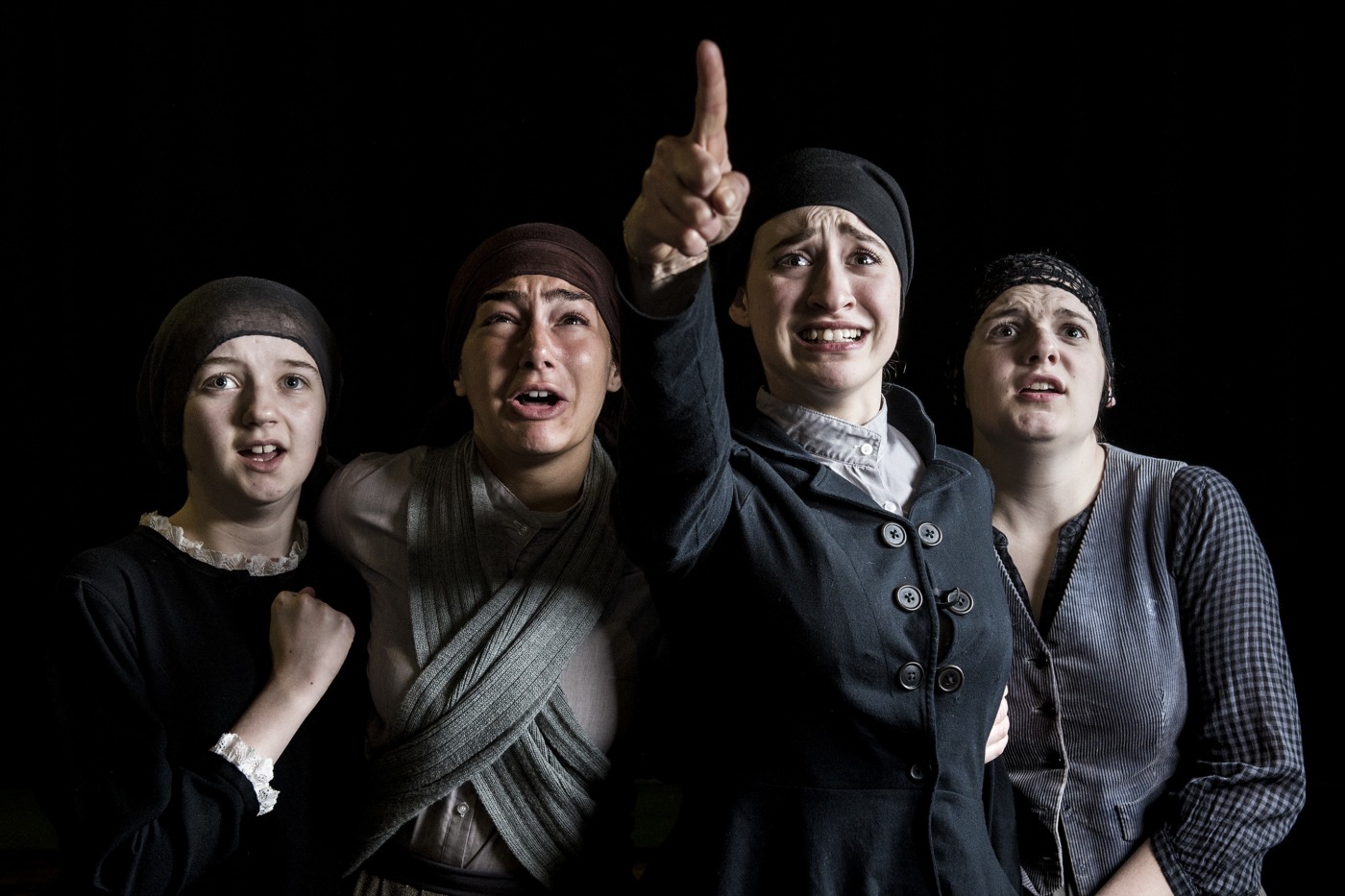 Perhaps it would be platitudinous to say that The Crucible will never be irrelevant. Although in many ways an intensely American play, in any place and at any time there will always be something to be learned from Arthur Miller’s trenchant masterpiece about the 1690s Salem witch trials. This week, the Loft Theatre’s production lets the prescient power of Miller’s writing shine through for itself, proving why The Crucible is a must-watch.

Where, for instance, the Old Vic’s 2014 production focused on the fearsome power of religious fundamentalism, 2019 finds fresh resonances in the renewed age of fake news, distrust, polarisation and paranoia. Directors David Fletcher and Gordon Vallins choose to keep the setting of Puritan New England, with a sparse but evocative set and muted monochrome costumes.

The soundscape brings to life the culture of tension and fear from the play’s outset. Spotlit, the ensemble cast appears in a chorus of hushed whispers, foregrounding rumour as the major driver of this narrative, before singing a solemn hymn to enter us into the gravity of the situation. As the scene opens, the Reverend Samuel Parris quakes with fear at the sight of his daughter, prone and inert on the bed, as her calculating cousin Abigail Williams explains how they danced in the dark woods with the other girls.

What follows is a terrifying tale of collective hysteria that sees people slinging accusations of witchcraft in order to avoid suspicion themselves. By its conclusion, the people of Salem are pleading guilty to crimes they never committed, in order to avoid the noose that swings above them – the allusions to America’s dirty history of torturing its extrajudicial prisoners for confessions are unmistakeable.

At the heart of the play is John Proctor, a challenging part to play: a man wracked with guilt for his extramarital affair, Proctor has grown isolated from his wife, from his society, and from his God. Craig Shelton brings an awesome vocal and physical power to the role. Indeed, there was at one point so much yelling that I thought it might lapse into a volley of coughs, but Shelton and the other cast members admirably held their own – even when the stage was accidentally drenched in darkness due to a technical fault.

Warwick graduate Safia Lamrani drips pure poison as the vengeful Abigail, her head held high as the other girls whimper and cower at her feet. Most bone-chilling and eerie, perhaps, was a scene in the third act, where the girls shriek and writhe in unison in their feigned possession by Mary Warren – sharp choreography renders this the apex of fearful hysteria. Collette Marie shines as the nervous and mutable Mary Warren, while Mark Crossley’s simpering Parris begins to grate in the play’s second half, contributing further to a general atmosphere of discomfiting tension.

Miller’s play, of course, is not without its problems. It pivots around the “whore’s vengeance”, positioning Proctor as a tragic hero when he has wilfully participated in the time-honoured behaviour of a misogynistic society. Although he acknowledges the shame of his lust and adultery, his obsession lies with the legacy of his name. This name, as we soon discover, will always carry more weight than that of Abigail’s, subject to the gendered accusations and inerasable smears that a girl of her position can too easily succumb to.

Ultimately, The Crucible prioritises a fear of Abigail’s sexual jealousy, which casts a shadow over the play’s events. But in the current political climate, there’s something to be said for how the girls weaponize rumour as a form of anti-authoritarian resistance: after all, their initial complaint centres on the lack of respect and agency accorded to them and their labour.

In exploring the rhetorics of the witch-hunt, the play indexes the tensions of accusations based not in evidence but in the form of the accusation. Although it was written as an allegory decrying anti-communist sentiment during the HUAC trials of the 1950s, The Crucible also seems to register some of the fears among the right in a post-#MeToo cultural era. “Is the accuser always holy now?” cries Proctor, in the heat of a passionate outburst, “Were they born this morning as clean as God’s fingers?”

Whatever your take on it, the play throws up vital questions about how women are allowed to tell their narratives, about female agency, and about the powerful consequences of gynophobia. Fletcher and Vallins, along with a strong ensemble cast, give an electrifying performance that will shock the audience to its core.

‘The Crucible’ is on at the Loft Theatre until 18 May. Tickets are available here.

Accessible Theatre: the work that still needs to be done