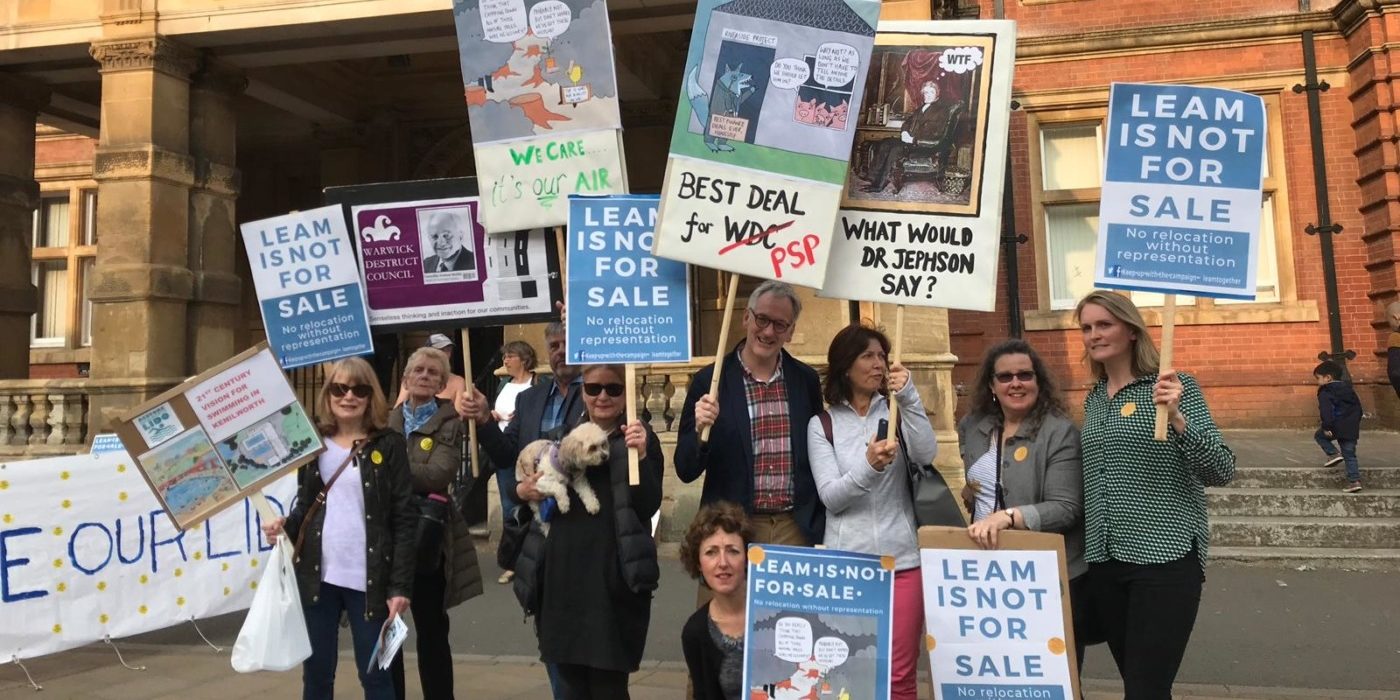 It was organised by Leamington Together and the Kenilworth Lido Campaign. The campaign groups were founded respectively to oppose council plans to move their headquarters and close Abbey Field Swimming Pool in Kenilworth.

They protested outside the Town Hall as the last council meeting took place preceding the local elections on 2 May “to draw attention to the lack of transparency and consultation that has characterised both the Riverside HQ relocation scheme and the Lido”.

WDC revealed various other proposals for constructions in Leamington in the past year, including building a “Creative Quarter” to attract young people to the town and luxury apartments where Covent Garden Car Park used to be.

Leamington residents have been rallying against the council’s plans since they were first unveiled in October 2018, due to consequences of the plans such as the felling of 85 trees, some of which have Tree Preservation orders.

170 new homes will also replace Riverside House, which are reportedly out of the “affordable” price bracket.

Last year, WDC justified that the headquarters relocation was due to current offices being “too large, too costly to run, in need of significant investment and relatively inaccessible to people without a car”.

In January 2019, council leader Andrew Mobbs announced that “the final decision on the Covent Garden redevelopment, the car park closure and HQ relocation” has been postponed to July due to “a consequence of the current uncertainty in the economy”.

WDC justified that the headquarters relocation was due to current offices being ‘too large, too costly to run, in need of significant investment and relatively inaccessible to people without a car’

On Wednesday, protestors gathered outside Leamington Town Hall ahead of WDC’s last meeting before the local elections in two weeks.

Leamington Together explained to The Boar that they have been campaigning since October 2018 “for a deferral of the District Council’s HQ relocation plans, and a thorough review of the cost effective and viable alternatives to its accommodation needs”.

“A motion to this effect, was passed by Leamington Town Council – the voice of Leamington residents – in February of this year,” they said. “In the interests of greater social and environmental equity, as well as securing best financial value for Leamington, this is a pivotal issue for the electorate.”

They further added that the Kenilworth Lido Campaign acquired the help of public lawyer David Woolfe to examine WDC’s proposals, which he deemed “possibly unlawful”.

The campaign hopes to “halt development plans while WDC re-run the recent consultation and re-examine the business case”.

“Their aim is to ensure that Warwick District residents and visitors alike can enjoy outdoor as well as indoor swimming, by replacing the small existing pool with a 25-metre outdoor facility to complement a refurbished indoor pool,” Leamington Together elaborated.

The Boar contacted Warwick and Leamington MP Matt Western for comments on the protest.

He said that “the public should have its say on £50 million plans” that affect housing and “two major public assets”, namely the offices at Riverside House and Covent Garden Car Park, which “are being disposed of without proper public scrutiny”.

According to Mr Western, WDC’s plans will also involve “a company which has been taken on by the district council without due procurement processes”, namely PSP Facilitating Limited, who will “gain hugely from these disposals and development projects”.

“The public want transparency and demand to know why the council is pursuing these plans without having presented robust alternatives, particularly given many other options available,” he said.

“As a result of public pressure, the council reluctantly deferred the project until after the local elections in two weeks. They did this claiming they needed more time to prepare, but this was done purely for political reasons – to avoid, or damage the elections.”

Mr Western stated the protest shows that “the public has seen through” council’s political motivations, and will “ensure that the council understands the strength of feeling, through the ballot box” on 2 May.

“I believe the local people will vote against the Conservative authority, and they will be seeking a change,” he added. “I have to say that it was the Labour party and residents who led this.

“I particularly pay tribute to the residents for being organised and making such a strong opposition to the council. I simply try to support them when I can.”

Responding to these issues and Wednesday’s protest, WDC told The Boar: “With regard to [the] ’protest’ at this stage we are unable to add any further comment to the statements/press releases we issued in January, which are available on our website.”