To celebrate International Women’s Day, we brought together three of Warwick’s most influential women in the arts. Eve Allin and Hetty Melrose are theatre-makers, and co-founders of Nettle Theatre which creates feminist work for and about 21st-century women; Lanaire Aderemi is a spoken word performance poet, an artist in residence at the Birmingham Repertory Theatre, and President of Warwick Anti-Sexism Society.

Hetty Melrose: Nettle came from a feeling of frustration. I think we need to be subversive – as soon as we feel like there’s a pattern or a rule, we should try to break it.

Lanaire Aderemi: I really like what you guys do. I’m in awe.

LA: Definitely both. I don’t know if this is a quote I made up or if I read it somewhere, but joy is a form of resistance. In my degree, even though sociology is quite diverse and good compared to other disciplines, I noticed that black (female) sociologists are always just add-ons. But Toni Morrison asks, what if we flip the script and put what was at the margin at the centre, how would that transform our way of thinking? That’s where it becomes exciting for me, in challenging the status quo. I hope that generations to come will think, wow, this person wrote something and she is from Nigeria and it can be a seminal text, it doesn’t have to be an add-on.

What if we flip the script and put what was at the margin at the centre, how would that transform our way of thinking?

HM: It’s a strange structural tokenism. It’s something I struggle with, being part of a hegemony, a white hegemony. I want to make feminist theatre and I want to talk about these things, but are we being white feminists?

Eve Allin: As students we’re in an academic institution, so making art is an add-on to our degree. It’s already a resistance in a way, doing something that is outside the norm. That is a way of asking, how do we re-centre certain narratives to make them the mainstream, rather than fringe or more experimental theatre.

LA: I think diversity is not a word that can work – it has to be decolonisation. We have to literally take it apart and build it from the bottom, rather than tick boxes – do we have a black person here, a white gay man here. That is essentially putting a plaster on a bruise: it’s not healing, it’s just putting something on top to conceal structural injustice.

I like that you both pointed to challenging form itself – a lot of people think that it’s just about the story, but the way the story is told is also important. I remember talking with my mentor, who was saying that my play was really good, but she feels like it wouldn’t appeal to a western audience! It’s interesting to see that even someone I really respect reproduces what she’s internalised as truth, as the right way of doing theatre. Can I not undo theatre by showing my own form?

It’s interesting because it is the first time in my life since my mum that I’ve been mentored by a black woman, and it is so refreshing. Working with people like Somalia Seaton [a British Jamaican and Nigerian writer and theatre-maker] made me realise that I deserve the space I occupy. I’ve had to be vulnerable because my work went to black women and my work is about black women, and they had to be critical about it. But visibility is instrumental, because I can see myself represented, and see my characters finding strength and refuge in the safe hands of the women who are mentoring me.

I’m a big believer in documenting the process – that is probably the richest thing. What we learn through our process is what makes us unique.

We are now getting a time to say, ‘this is my experience’, but inevitably it’s still a reaction against, which is tiring

HM: There’s a process after the product as well, which is so often forgotten. I’ll look back at some of my work and wonder, how do I feel about that? Unpicking and challenging all the time is when art is at its most rich – just playing and not being afraid to be wrong is a very healthy thing.

EA: The joy is so important. Joy comes with hope and there’s hope for the stuff that loads of young people are making. It gets so much harder when you get into the industry, with obligations to make money and sell a certain number of tickets. I feel so empowered to make work but I also feel crippled that that work might not be seen or succeed.

HM: When I put out work it’s personal and political, which makes me very vulnerable. We have to be so brave. We are now getting a time to say, ‘this is my experience’, but inevitably it’s still a reaction against, which is tiring.

LA: For me, my audience is also about the people who came before me. A lot of my content is very historical or about Nigerian feminist activism. The people I’m writing about are dead, so my reaction is always, would they be happy seeing this if they were to watch it? I think I have some creative licence, but my duty to the people who came before me, who have enabled me to tell this story.

I don’t think I can safely say that even if I wrote a play for black women, that black women would come – there are accessibility issues. As long as my audience are receptive and willing to learn then that’s all I care about. In theatre, people are conscious of attracting a certain demographic, but we also have to challenge the structures that mean that someone who is working class can’t afford these tickets, or someone doesn’t feel represented on stage.

EA: Something I’ve found making theatre with lots of different people at Warwick is that some people definitely make work for audience, while some make it for themselves, and I don’t think either is bad or good. But I do think that it will change how you think of, and who is allowed into, the theatre space.

In some ways we think that we can save people through art. But some people just don’t like theatre or art, and that’s fine. There’s no point forcing people to do something they don’t want to do.

HM: The comparison between my friends from sport coming to watch things that’s we’ve made, and my friends from theatre, is really interesting. The theatre people are talking and chilling, whereas the sport people come in and watch with every ounce of concentration that they have. And what they get from it is totally different from what the theatre people get from it. It’s really nice to see people who treat it as a privilege, to appreciate art and to take time and to give it everything.

It’s about accessibility. How do we make it so that if you want to come, you will feel as warm and as welcome and as comfortable as possible? And if you don’t want to come, then that’s okay. It sounds silly but it makes me feel happy when people have some form of art in their lives. In whatever context, whether it’s you have a tv show you love on Netflix, or you love going to the opera, I don’t think we should be snobby about it.

How did the events and aftermath of the Warwick group chat affect your theatre-making?

HM: I felt I knew the pattern that was going to happen. There would be outrage, protest, noise, social media, and then I wouldn’t hear anything. I have written a play called Lying in Silence because I literally lay on my bed for a long time thinking, it’s going to stop and no one’s going to care. I thought, I cannot just do nothing. I need to get up tomorrow morning and do something. So I wrote and went for loads of angry walks and cried and wrote some more – it was this unearthing of stuff and you realise, this isn’t about me, it’s about a collective. I can’t be the only person feeling like this, so it’s about sharing. This is healing, this is growth. For me and for a lot of people, art is therapy.

EA: I’ve protested against this university every year that I’ve been here, but this was different because it was such a huge knock. Literally everything I do, I try to empower myself, and empower other women. So to think that something really good is happening through the art that you’re making, and then to have something like that happen and see people defending it, is disappointing and disheartening. But this show feels like something, even if it’s just a drop in an ocean. It still feels like some kind of resistance, not letting people get away with it. We’re going to make stuff, and make ourselves visible, and make ourselves heard.

“But I thought only girls did ballet?” 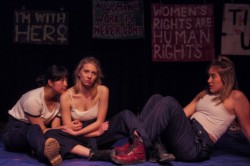