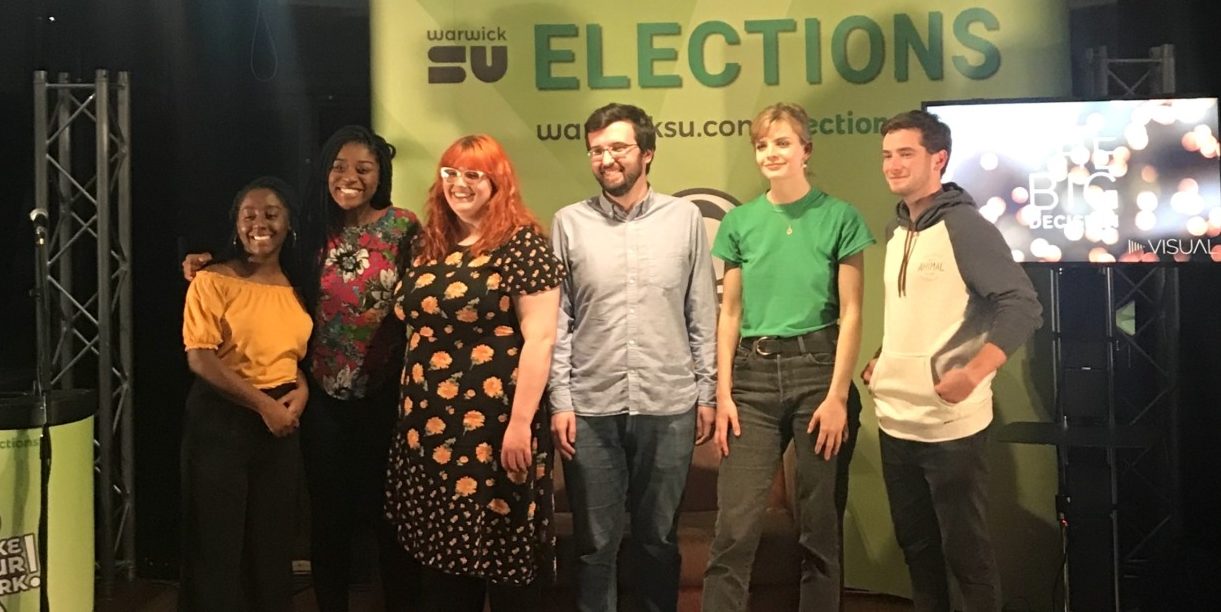 The results of the University of Warwick’s students’ union (SU) Spring Elections were announced tonight at The Dirty Duck.

The Social Studies faculty had the highest voter turnout with 2,576 casting a ballot, followed by 2,416 voters in Science. The departments with the largest turnouts were History (523 voters) and Economics (519 voters), followed by Warwick Business School (WBS) at 498 voters.

For the Societies Federation, Warwick Student Cinema had the most voters at 636. Economics Society came next with 616 voters, followed closely by Warwick Finance Societies with 593 voters.

For the Sports Federation, Five-a-side Football had the most voters at 173. Badminton had 125 voters, with Men’s Cricket coming in third at 102 voters.

Ben Newsham has been elected as the new SU President, succeeding Liam Jackson. He ran against four other candidates, whereas the year before, Liam had only one other competitor.

“I didn’t think this was gonna happen,” Ben said. “I’ve done a big WarwickLove post to thank everyone.”

He continued: “With a job like this you have to be honest. I will say to all the candidates – Larissa especially, you did amazingly.”

Ben and Larissa tied at 1,939 votes in the first round. In the final round of voting, Ben won by 141 votes. He hopes to sort out “circuit laundry, the buses, the mental health services”, make SU easier to engage with and relate to, “hold the University to account” following a year where “the University has been in the headlines a lot”, and more.

“Big Ben, big dreams,” he emphasised. His three steps to moving on together includes: involving students in every level of the review, clear information on what the University finds “acceptable”, and notifying students about the process of the reviews.

Chloe Batten has been elected as Education Officer and the SU’s Deputy President for the next academic year, continuing the legacy of former officer Larissa Kennedy. Chloe ran against Conrad Lewandowski, and Oscar Sterland, winning 60% of votes in the first round.

She hopes to liberate education and lead decolonisation projects, having been part of the Education Exec, the Liberation Conference, Warwick Anti-Racism Society, and more. Some of her policies include releasing exam timetables earlier and making lecture capture more accessible.

Alice Churm will be the new Postgraduate Officer, succeeding Ellie King. Ehsan Ezzattpour Ghadim, Ainhoa Rodriguez Muguruza also ran for this position. Alice is currently studying MA Film and Television Studies, and works as a Societies Coordinator at the SU.

Milly Last has been elected the new Democracy and Development Officer of Warwick SU, winning 63% of votes in the first round. Having been on the Irish Society Exec and succeeding Ben Newsham, Milly had four competitors for DDO.

“The real reason I ran is because I want to single-handedly save the environment,” Milly said. As an avid advocate of environmental activism, her manifesto promoted ideals such as sustainability. She also hopes to introduce a university-run bus service to replace Stagecoach.

Tiana Holgate has been elected the new Welfare and Campaigns officer for the next academic year, beating four other candidates and following the footsteps of former officer Jemma Ansell.

“Dear Tiana, aren’t you amazing? With this week you have learnt so much and I’m so proud of you,” she said in a letter she wrote to herself. The Sociology student hopes to increase liberation and focus on groups such as international students, PhD students, student carers, marginalised communities, and many others.

Luke Mepham has been elected Societies Officer for the next academic year, after running against five other candidates. In the final round of voting the Maths Society President won by only 39 votes, overtaking Nikita “The Key” Zhelezkov to take on Leonardo Palma’s role.

Pledging to abolish the Societies Federation Fee, reducing bureaucracy and problems with event planning, he hopes to “reduce the cost barrier” even if it “will not be easy”.

Charlotte Lloyd has been elected as Sports Officer for the next academic year, beating four other candidates and following the footsteps of former officer Balraj Dhingra.

Charlotte bested Amelia Ghanbouri by less than 100 votes and was complimentary of the latter’s campaign. Her plans include negotiating with Akuma for an online shop, developing the MyWarwick Sports and Team Warwick further, and tackling issues within sports such as homophobia, alcoholism, etc.