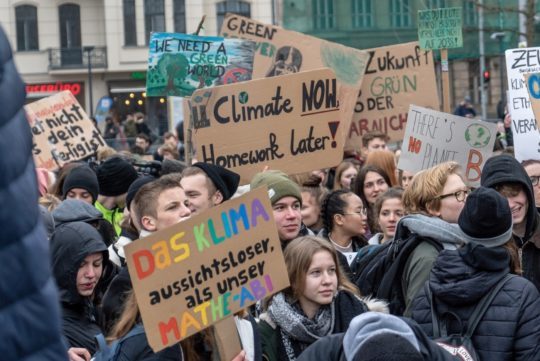 The letter was signed by the three co-leaders of the campaign, the President of the Global Sustainable Development (GSD) Society, the Co-Director of Campaigns Climate Reality Campus Corps and the Editor-in-chief of GLOBUS Warwick.

The Climate Emergency Coalition launched their flagship event ‘Project: Climate Emergency’ on 13 January and have since then collected a large number of signatures in support of the cause by students, academics, officers of the Student’s Union, student societies, University departments and trade unions.

It stands in solidarity with the campaigns launched in Bristol and London, and the University of Bristol to declare a state of Climate Emergency.

These protests are inspiring the next generation to prioritise our planet

The open letter  calls on the University “to attend to its duty to our community, and to our work: to declare a state of Climate Emergency, and to work in good faith, proactively, and with great urgency, towards a state of net carbon neutrality by 2030”.

GSD Society President Joaquin Salido Castilla was contacted by The Boar and emphasised the importance of the Climate Emergency and stated: “Because of the findings of IPCC’s 2018 report, we need to limit global warming more than we thought we would have to.

“We need the university to commit to becoming carbon-neutral by 2030.

“It’s not enough to acknowledge the problem: we need to do something. And we do believe that doing this at university can make a difference since it’s universities that shape the future. If we expand this initiative to other universities, we can achieve something big.”

Todd Olive, Editor-in-Chief of GLOBUS Warwick added: “Climate change is the defining issue of our time. It poses an existential threat to our society, our way of living – in many cases, to our very lives. We are calling on the University to embody the change that we all need to make in our lives: to lead our community, to show us all that, together, we can win this fight.”

It’s not enough to acknowledge the problem: we need to do something

He continued: “I authored the letter on behalf of the campaign to share our goals, and the beliefs and values that fundamentally underpin our entire campaign, all of the work that we’ve been doing, and to call on the Council in a positive, forward-looking, collaborative and hopeful way to accept what is a widely-supported, critically urgent mandate for change.”

Becca Brown, the Environment Officer-Elect, who also signed the letter, further told The Boar: “We aim to improve our goals with regards to campus carbon output and look to achieve a state of net carbon neutrality by 2030.

“We hope that everyone can make small sustainable changes in their daily lives to help the climate as a whole, and to help people feel less overwhelmed and more powerful in the fight for our planet.”

A further event took place on 15 March by Warwick students to show support for the students and young people around the world that are gathering to demand immediate actions from governments to fight climate change.

The Warwick students for the Youth Climate Coalition gathered attention on Facebook event with 690 going or interested and had around 100 students taking part in the event.

The event involved students giving speeches about the #Youth4Climate movement and its importance. They also collected cardboard from shops to do banner workshops, with the Allotment bringing banners and seed bombs to the event.

Violette Filippini, one of the event organisers told The Boar that: “We thought that as students, we had an obvious responsibility to participate in a march.

“It is comforting to see so many new faces that are also invested in fighting this crisis!

“These protests are inspiring the next generation to prioritise our planet, and anything our university can do to raise awareness and education, make a positive impact both locally and globally, and become more environmentally-minded in general, we should be investing our thought and time into”, added Becca Brown.

Update:
Matt Western, MP for Warwick and Leamington, also signed the Climate Emergency letter. He told The Boar: “The UN IPCC’s latest report was clear: the severity of the ecological crisis is worse than we thought and to we must take emergency action.

“Yet this government’s track record on tackling climate change has been marred by complacency. The UK urgently needs to commit to reducing carbon emissions to net zero and implement transformative policies to achieve this.

“The Climate Emergency campaign at Warwick University has already gained widespread support and this is a great opportunity for the University to lead the way with progressive initiatives. As more institutions declare a state of Climate Emergency and introduce ambitious emission reduction targets, public pressure on the government increases.”

He also commented that on the day of the School Strike 4 Climate he visited Myton School in Warwickshire “to hear their concerns on the climate crisis and their views on the actions policy makers should be taking”.

“It was hugely inspiring to hear from both Primary and Secondary school students who wrote to me about their decision to join the climate strike,” he said.

“Many students expressed that it was not an easy decision to miss school, but one they took very seriously.”