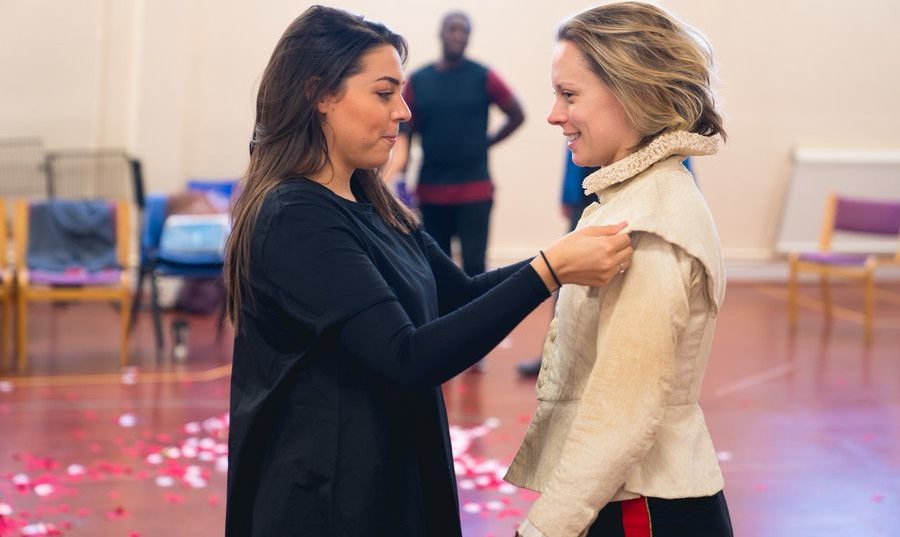 Sophie Khan Levy (l) in rehearsal for As You Like It. Image: Topher McGrillis

From Valentine’s Day, Levy will be playing Celia in As You Like It in Stratford; in late June she will start her role as Mariana in Measure for Measure. Both shows will then tour the country until April next year. Levy is aware of her good fortune: “It’s funny being in Stratford now – you look at the books of the people who have played the parts, people like Fiona Shaw, Judi Dench, and you’re thinking gosh, I’m lucky I’m in rep now.”

Like those giants, Levy has honed her craft the old-fashioned way. After graduating with a degree in Theatre and Performance Studies – her mum had urged to her to “have something to fall back on” in case the acting dream didn’t come to fruition – she did a three-year MA at the Guildhall School of Music & Drama. Since then, major work has included a season at the RSC, a tour of one-woman show Hanna – for which she received universally positive reviews – and an immersive production in an Indian restaurant in London.

Like those giants, Levy has honed her craft the old-fashioned way

“Doing a range of things is always the dream,” Levy says. “I always think that the actresses I look up to and respect have basically played the whole of the Shakespeare canon – you look at their CVs and they’ve played them all. And then they’ve done Chekhov, they’ve done TV and film, they’ve done loads of characters, and that’s how you learn. Doing the same thing over and over again, you only learn one thing.

“I still really believe that acting is a craft to be learnt, not necessarily a God-given talent. It’s something you work on, and you learn and you grow. I think you need three years in training, but these days a lot of people aren’t even training. It’s changed since I left Warwick, the whole industry is shifting. At once it is amazing that the industry is opening up for everyone, because so often acting is reserved for people who can afford it, so it cuts people off who are from different backgrounds. But I do also think that on the flipside, there’s a social media, everyone’s-a-celebrity vibe, which is dangerous for this industry.”

The social media, everyone’s-a-celebrity vibe is dangerous for this industry

Levy herself is no stranger to the industry. Her mother, Shaheen Khan, was a “pioneer”, involved in one of the country’s first Asian theatre companies, Tara Arts. “At that time it was tough, she did massive jobs with some really well respected actors but her white peers had a very different trajectory.” Have things improved for Levy, a generation later? “I think weirdly l have come across different challenges being mixed race, and a mix of races that is not necessarily on trend. I had someone tell me once that I wasn’t even mixed race, and I was like, please define the word mixed and the word race, and then tell me I’m not mixed race! I’m not cynical but I definitely don’t want to say we are anywhere near where we should be. I don’t think we’ve come on as much as we think we have from when my mum was working.”

Levy is certainly conscious of her status as a mixed-race actress. “Growing up I had either disassociated from my transnational identity or was unaware of it playing a part. Warwick when I was there was a very white university, my school was hugely white, the same at drama school. It was only when I left drama school that I considered myself as a BAME actor, when I’d always thought I was just an actor. And then I realised that I was part of this other division of actor, which I hadn’t really considered as being my identity. Since leaving drama school, I’ve been kind of forced and then excited to explore it.

Since leaving drama school, I’ve been kind of forced and then excited to explore my BAME identity

“Especially in mixed race identities when you’re neither one thing or the other, it’s a psychologically interesting and overlooked position. Often people think you’ve got the best of both worlds, but you’re also seemingly in neither camp. It’s an interesting place to exist in – it’s quite fluid, it can be quite difficult to pinpoint what the experience is. It’s in the grey area for sure.”

But Levy has learned to embrace this part of her identity. “When I first graduated I think I would have preferred never to consider it. But now I realise that it’s actually really important to talk more about this experience. I used to think, I’m basically white, I just want to play white roles. And now I hear that and, though I completely understand where I was at that point, I think it’s so important that that’s not how I feel, that I should never have to feel that I’m basically white. I don’t even know what that means now that I hear myself saying it! The idea of just wanting to play white roles is absurd. I want to play artistically challenging and satisfying parts.”

I want to play artistically challenging and satisfying parts

Access for those who have previously been excluded from playing those parts is something the RSC is trying to improve this season. Its cast is “diverse in terms of race, people from up and down the country, someone who is deaf, someone who is in a wheelchair and a visually impaired actress. They are opening the casting to all the different groups of people that make up this country and then casting the best actors from that.”

The solution is not just to cast diverse actors, but to allow them to tell the stories they want to tell. And this is something Kimberley Sykes, directing As You Like It, is especially good at. “She really wants to make it about the people who are on stage and wants us all to be telling our own story through the play. Everything is driven by the actor who is playing the part, not by the perception of the part. We are all given the freedom to be exactly who we are.”

In this RSC season, we are all given the freedom to be exactly who we are

Levy had played Celia at Guildhall and “always thought she was a brilliant character.” She feels especially close to the character now: “This play is about two cousins. I went and lived in Toronto for a year and a half with my cousin, which was amazing because we didn’t really know each other before. There’s a line in the play where I say about Rosalind that we were coupled and inseparable, and that was me and my cousin in Canada. My family called us the odd couple because we really were coupled and inseparable.”

Ultimately, Levy hopes, the diversity of the cast and their personal connection to their character will make Shakespeare – so often considered elusive or for the elites – relevant to everybody. “Often people think you need to stick some kind of concept on top of Shakespeare or place it somewhere that you think people will understand. But when you see two people talking to each other and communicating with each other, that’s what’s relevant because it’s human. It’s just two people talking to each other about something on stage. Everyone can relate to that. Good acting, good storytelling, is something we can all get behind.”

As You Like It and Measure for Measure are at the RSC, starting 14 February and 28 June respectively. They are on tour across the country from 25 September. Tickets are available here.

Student coach trips are also available directly from campus to the RSC, to see As You Like It on 18 February and The Taming of The Shrew on 13 March. More information can be found here.