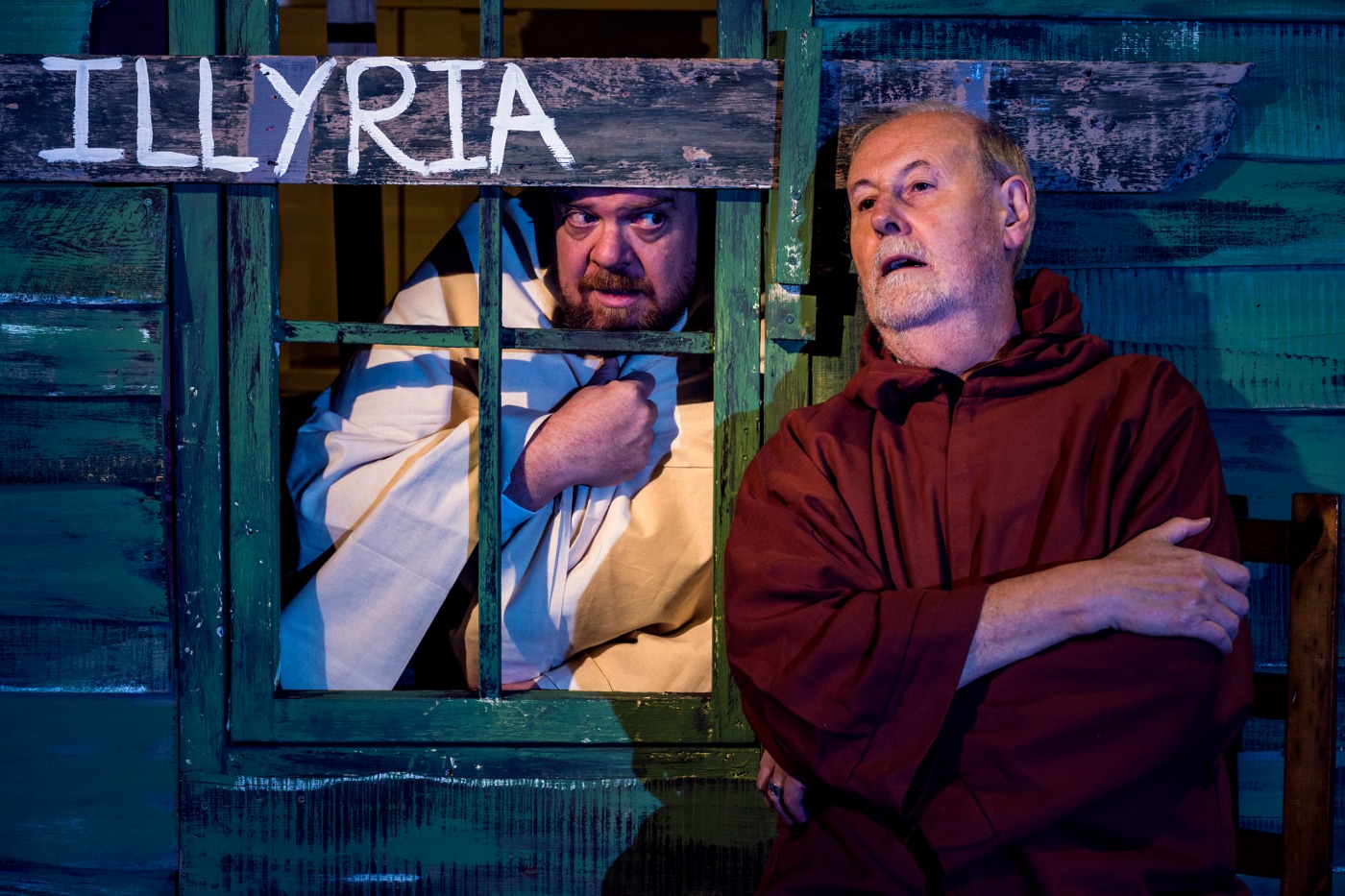 Shakespeare’s Twelfth Night will be on stage at Leamington’s very own Loft Theatre until December 15, and it is not one you want to miss. Director William Wilkinson’s production is fast-paced, thoroughly entertaining, and modern, but not quite the usual production of this Christmas play that you might expect.

Set in Illyria, Twelfth Night follows the story of twins Viola and Sebastian, separated in a shipwreck. Viola, disguised as a young man Cesario, enters the service of Duke Orsino, and falls in love with him. Duke Orsino convinces himself he is in love with the wealthy countess Olivia, who happens to fall in love with Cesario. In a complicated love triangle, Viola’s twin, Sebastian enters the plot. He is taken for Cesario by Olivia, and they marry secretly. Viola eventually reveals her identity and is reunited with her brother. There is time for a final marriage, between Duke Orsino and Viola, before the play ends.

Malvolio, played by Craig Shelton, and the storm which opens the play, draws on a darker, more tragic element of Shakespeare’s comedy. But this adaption chooses to focus on the twists and turns of the love triangle, allowing for a fun eventful play which kept all of the audience laughing, each character adding brilliance through their own individual quirks.

Wilkinson’s costume choices and clever direction follows the theme of the play’s subtitle, What You Will. The funky and out-of-the-ordinary costume choices – such as dungarees, brightly coloured suits and shirts, bright red dresses and cowboy hats – raise many questions and many gags, why does Sir Andrew wear a kilt? The question of the wacky outfits alludes to a major theme of the play: nothing is ordinary and anything is possible, so why not feature a kilt? Why not wear bright robes and shirts?

The captivating set by Kimberlee Green provided the finishing touches to the quirky performance, with vibrant colours and charm. The characters ran around this brilliant set and added to the humour and substance of the play. The quaint rustic building which is turned (quite literally) into Malvolio’s cell is the perfect example of how this play simultaneously is one thing and another, always surprising the audience.

Nothing is ordinary and anything is possible, so why not feature a kilt?

The character of Sir Toby Belch, played by Peter Daly-Dickson, and Sir Andrew Aguecheek, played by Jeremy Heynes, had a brilliant relationship on stage which stood out as providing not only the most comedy but the most visual satisfaction with movement, energy and exaggerated performance. Beatrice Cranke, playing Viola, was performing for the first time at the Loft Theatre and stole the show. Her display of emotion, her ability for comedy, and her final scene pouring her heart out as she was reunited with her brother evoked great pathos. Cranke and Shelton were by far the greatest entertainers of the night.

With characters acting in an energised, stampede-like manner, it was hard not to keep your eyes glued to the comedy. The crowd was thoroughly entertained, with non-stop laughter, apart from the few dramatised songs by Feste and the musician allowing for moments of emotion and silence. Wilkinson said: “This play is a miracle of perfect structure and harmony… I know of no other play that is its equal – [it is] the perfect comedy.” The audience, it seemed by their hearty engagement with the production, agreed with me in thinking he was able to draw on this “structure and harmony” and create such an entertaining and alternative version of Twelfth Night. It is clear that this production was a hit – I only wish I could go and see it again.

Twelfth Night is at the Loft Theatre until December 15. Tickets are available here.