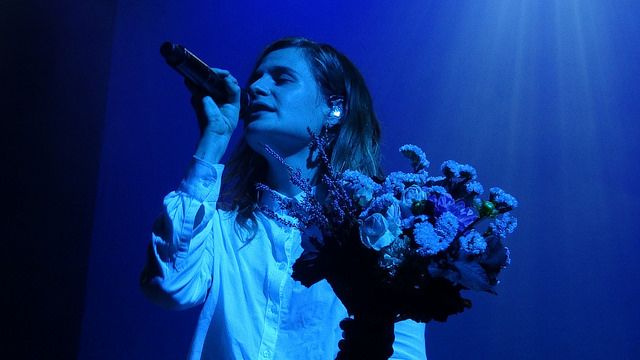 Héloïse Letissier, a.k.a Christine and the Queens wowed the people of Birmingham during her first performance in the midland city. By alternating seamlessly between the work from her first studio album Chaleur Humaine to her recent release Chris, she kept the energy high: the atmosphere was one of warmth and adoration and created a sense of catharsis within the audience.

She teased her latest tour and her introduction as Letissier as a sweatier version of her earlier self and from her opening performance of ‘Comme Si’ to her final encore of ‘Intranquillité’ she did not disappoint. The academy was teaming with people of all ages, it was perhaps the most comfortable experience I’ve ever had in the pit of a venue, especially since I was at the front for much of her performance. You can tell a great deal about a performer by her fans, and Letissier created a safe space for everyone on that cold Monday night. Her gentle command of the crowd allowed her to create this united space in an otherwise overcrowded hall.

For those who don’t know a great deal about the artist, she’s a pansexual androgynous powerhouse and by golly can she dance. Letissier and her troupe of dancers radiate sensuality, with an infectious energy that makes it difficult to stay still in the tight space of the pit. You could tell that for many the only let-down of the night was the lack of space to dance. Their performance of ‘Girlfriend’ and, of course, the now infamous ‘Tilted’ I’m sure had many people searching up tutorials on their commute home or at the very least attempting to follow the rhythm and groove live.

I cannot emphasise enough how bizarrely accurate the description of this tour as “being transported to a sweaty club” is – the fluid yet animalistic physicality of the performances and of each of the dancers lit a fire within the crowd that then billowed and swelled throughout the course of the set only to be reignited in the encore, in which Letissier and her fellow dancers emerged from the balcony and moved throughout the crowd causing a veritable explosion of energy to send us all home on.

Letissier also made a point to include both English and French translations of her songs in her set, which one may have assumed would create a sense of alienation within the crowd, for any of those less confident in the French lyrics that is. Her performance of the French ballad ‘Nuit 17 à 52’ quickly quelled that momentary anxiety, with her assistance, of course. There’s something so wonderful about a crowd of people singing along to a song that, for most, is not in their native tongue, and for a great deal of them  might not even be in a tongue they can speak. Letissier’s ability to move seamlessly from a song like ‘Nuit 17 à 52’ to a cover of the Michael Jackson favourite ‘Man In The Mirror’ enables this sense of linguistic fluidity that makes even those who are less confident belt out ‘Voleur de Soleil’ at the top of their lungs.

There’s something so wonderful about a crowd of people singing along to a song that, for most, is not in their native tongue

Once you’ve stripped away the immaculate Romantic setting (with a capital r), the compelling dancers and the strobe lighting we’re left with Letissier in her raw form. From her early performance of ‘Make Some Sense’ to ‘The Walker’ (or ‘La Marcheuse’) she took a crowd of pumped up weirdos to a silent community of eager listeners. Her voice was angelic, particularly her rendition of ‘What’s-Her-Face’ took my breath away in a way that I hadn’t felt since my last 11:59 am deadline submission.

In essence, her concert revived me, in a way that I’d forgotten music could. Her self-labeled ‘freak-pop’ combines 80s bops and electro-funk, indie pop with introspective ballads that will surely send your Fitbit into meltdown as it tries to track the dramatic peaks and troughs of your heart rate as she transitions from the electric sound of ‘Science Fiction’ to the gentle harmonies of ‘Make Some Sense’ without warning.

Watching Letissier sing and dance her heart out on stage was perhaps the best way to eliminate those Monday pre-Christmas blues. Hopefully, she will return to Birmingham again soon for anyone who’s looking for a little French bop-filled androgyne in their life.