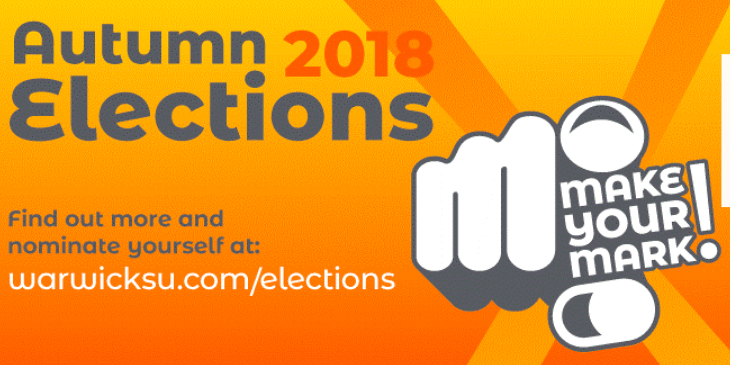 Autumn Elections for 2018 are now open. To become an officer or representative, students can nominate themselves and become involved in the “Make Your Mark!” campaign.

Nominations began last Friday. They will close at 12 noon on 12 October, after which polls will open four days later. Applicants will have to prepare a manifesto and engage in campaigning.

Student officers can “get involved with improving the student experience, no matter the experience they have”. Posts for the election include SU Exec members, Faculty Reps, Part-Time Diversity Officers, NUS National Conference Delegates, and more.

There are six places for Democracy Exec Member, who will be responsible for student votes, Student Council, and elections. They will also work on boosting democratic engagement across campus.

Similarly, the six Development Exec Members will have to allocate funds, improve SU events and activities, and formulate their own campaigns.

Four Education Exec Members will have to work with the Education Officer, Faculty Reps, staff, and more to campaign on academic issues affecting students.

There are eight places available for both Societies and Sports Exec Member, who will work to support societies and sports clubs. Six Welfare Exec Members will have to research on welfare provision, and “lobby for change when needed”.

Postgraduate Research Representatives are also available for the same faculties. They will represent postgraduates, which make up nearly 50% of Warwick’s student population.

There will be one representative or officer for MBChB, foundation, international (EU and non-EU), part-time, and mature students each.

There are six positions available for NUS National Conference Delegate, who will have to attend the conference from 8-11 April 2019 and decide on NUS policies and officer positions. Policies passed at last year’s SU Referenda will be implemented.

You can find a list of all the mentioned posts and their full descriptions on the SU website. Earlier this year, 4550 students voted for the Spring Elections. The by-elections were also concluded in May.

More information on the elections can be found here. For questions on the election process, visit the SU headquarters, or email democracy@warwicksu.com.