Why libraries are about more than just books

As an avid bookworm, especially of science fiction and fantasy novels, I love going to the library. However it’s clear that public libraries are on the decline. In 2005, library attendance was at 48.2% in England whereas it was at 34% in 2016. This is mainly due to websites like Amazon where you can easily buy secondhand books cheaply. I use Amazon but there is a special something that I feel when I take the time out to go to my local library.

I live on the Isle of Man where there are plenty of libraries and a real small community spirit, so I guess I am lucky to have such good library access. However, some people say that libraries cost too much to maintain which I don’t necessarily believe in. I imagine it is more expensive paying Amazon employees and as long as there are people who are invested in books, libraries are a great investment. One solution could be having more volunteers, which is something I did one summer before starting university.

But what are libraries really about? They provide a mainly free service to the public instead of being commercial corporations, which some readers are against. You can go to the library for help, more specifically for book recommendations. I personally feel that it’s sometimes more difficult than it needs to be to ask for help on Amazon in general and especially with refunding books.

Libraries can also provide shelter from the elements or out of necessity. I find that the majority of library staff are friendly and it’s refreshing, especially in this digital day and age, to be able to physically take out books and speak face-to-face with librarians, who are usually professionally trained. You can also meet like-minded people in libraries and join book clubs if that’s your kind of thing. I was a member of a book club which specialised in science fiction and fantasy novels. This was a lot of fun, especially when you can share the love of your favourite book with another library user.

Personally, I am a strong believer in reading for pleasure and not because you have to. Sometimes people don’t warm to libraries because they never get hooked on books and read them just as a part of school assignments. Regular library visits inevitably lead to more reading, especially in the first five years of life.

Libraries don’t just offer books and computers to the public though, they also provide DVDs, audiobooks and CDs

Having a library card increases responsibility in young children and at libraries you can find unknown gems you didn’t know about before. Libraries are especially useful for those who read quickly. My 10-year-old brother reads very quickly and loved reading from a very young age. He prefers having the privilege of going to a library for his next book as he doesn’t have to pay or order online and spend time waiting for deliveries.

This sentiment is and was shared by many novelists, especially by American science fiction and fantasy author Ray Bradbury. In his most famous novel, he imagines a dystopian world where books are banned and set on fire. Bradbury also raised money to prevent library closures in California, stating that “libraries raised me”. While Bradbury was wary of computers, nowadays it’s very useful to use computers in libraries for things such as homework help or research. Libraries don’t just offer books and computers to the public though, they also provide DVDs, audiobooks and CDs.

Finally, libraries can form a big part of communities, towns and cities. Some of my fondest memories as a child were going to take books out from the library. I would then rush up to the room with them as soon as I got home! Because of this and what I have said throughout this article, I strongly believe that libraries should stay a part of the human experience and are more than just places with lots of books. 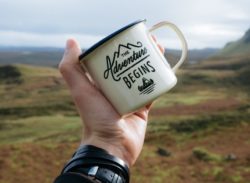 Sophie’s Poem of the Week: ‘Begin’ by Brendan Kennelly