According to admissions officers, better-off students are using clearing to “shop around” for universities, to the detriment of their disadvantaged peers.

Russell Group universities have been increasing their student intake from clearing, which could allow some students to choose “better offers”, whereas applicants from disadvantaged backgrounds may lack the same “confidence” and support.

The figures come after the cap on university numbers was lifted in 2015, causing universities to “fiercely compete” in attracting students. At the same time, the number of 18 year old applicants have decreased, creating a “buyer’s market”.

Commenting on the increase, Emma Leech, the director of marketing and advancement at the University of Loughborough, said: “We’re seeing a trend of people who have had a university offer – sometimes unconditional – but they are changing their mind [at clearing].

“It’s almost [like they’re] savvy shoppers. Now they might get three offers in the bank before they decide what they want to do. That’s a new thing in the past two years.”

The Sutton Trust, a charity working to improve social mobility and educational disadvantage, stated that clearing is “unfair”.

Founder Sir Peter Lampl said: “A lot of well-off parents are on top of this as soon as their kids’ grades come out. They’re talking to universities, they’re getting their kids into the best courses.

“Kids from low to moderate income backgrounds don’t have parents who can play the system and they’re not at schools geared up to getting kids into Russell Group universities.”

He added that universities have improved by providing “contextual admissions”, and commented: “They’re giving poor students a break on their offer. It’s a good idea to say ‘I’m from a low to moderate income background, give me a break’.”

He said: “The new Office for Students measures universities on their ability to recruit people from underrepresented groups. The best thing is to be very clear with the university about any disadvantages they may have experienced.” 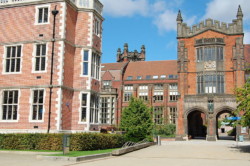 UCAS sends erroneous email to 4,000 students confirming their acceptance to the University of Newcastle