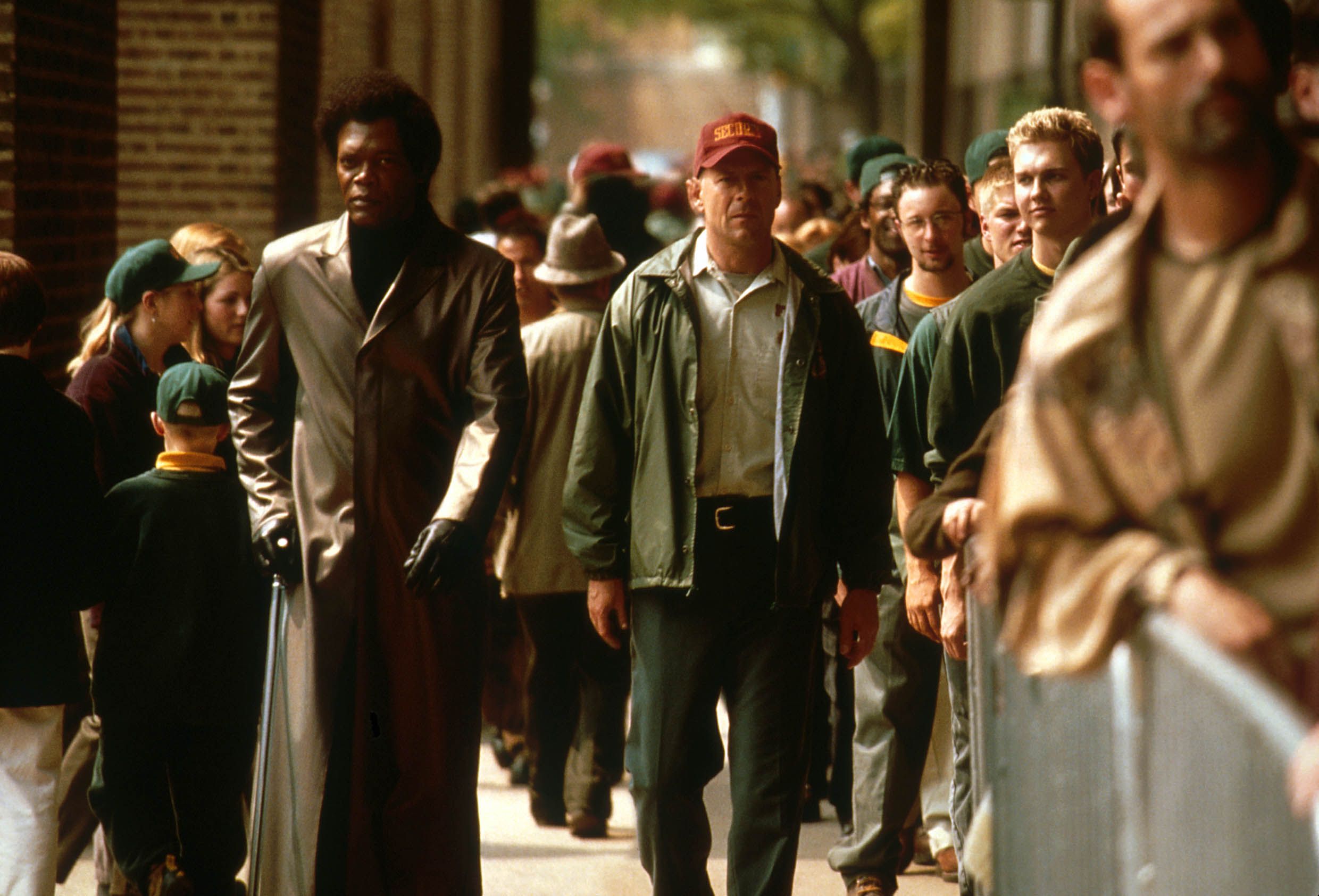 A look back at Shyamalan’s ‘Unbreakable’ in preparation for ‘Glass’

The film Split showed M. Night Shyamalan back on form with a terrifying psychological horror. The film saw three girls try to escape ‘Kevin’ (James McAvoy), a man with multiple personalities. One of the most exciting moments in the film, however, was almost incidental. It just so happens that at the end, a woman discusses Kevin and it transpires that the man she’s sitting next to is David Dunn (Bruce Willis). This meant that Split and an earlier Shyamalan film, Unbreakable, shared a universe.

Be warned, there will be some spoilers in this article

A trailer for Glass, the third film in the Unbreakable trilogy, dropped at Comic-Con last week and was received with a lot of excitement. It showed Kevin, Dunn and Unbreakable comic book fan, Elijah Price (Samuel L. Jackson), receiving psychiatric treatment in an institution because they believe they are superheroes. Joined by Split’s Anya Taylor-Joy and newcomer Sarah Paulson (a psychiatrist), Glass looks to be a smash hit on its release in January next year. So what better time to look back at the film that started it all off? Be warned, there will be some spoilers in this article. If you haven’t seen the film, make sure you go watch it first – you won’t be disappointed.

Unbreakable follows two men, both broken in different ways, who find purpose and meaning through each other. Price (Jackson) suffers from a rare medical condition that leaves his bones easily susceptible to breakage and Dunn is a security guard with a crumbling marriage and a withering relationship with his son. He’s also the sole survivor of a train crash, walking away without a scratch, and this leads Price to his door. He suggests that Dunn’s ability to resist damage is a power meant for good, and encourages him to use it – Dunn is convinced that Price is mad, but could he possibly be right?

I loved The Sixth Sense and Signs, but Unbreakable is his best movie. It was unfortunate, then, that it was sandwiched between these two films because it worked as a gritty and realistic superhero film years before Christopher Nolan made it a popular thing to do. The great tragedy of Unbreakable is that is was released in 2000, before an appetite for superhero films had developed in a filmgoing audience, and on the heels of the markedly different Sixth Sense – people weren’t really sure who the film was for and, despite being a critical hit, it has since flown under the radar.

Although I promote Unbreakable as a superhero film, get those ideas of Marvel and DC films out of your head

Although I promote Unbreakable as a superhero film, get those ideas of Marvel and DC films out of your head. The movie is quiet and very understated. It is far from the ominous beams of light in the sky and the CGI villains. Instead, Unbreakable’s villains are all too human. He picks a bad guy in a beautifully shot scene – Dunn stands in a crowd, the villains standing out in bright colours against the muted backgrounds, as James Newton Howard’s score gets the pulse going. Dunn’s eventual encounter with the Orange Man plays to an all-too human fear of home invasion – it’s the only fight sequence in the film, and it is consciously unpleasant, shot from a distance in a single unbroken take. For those who complain about the soullessness of superhero films, this is the movie for you.

At times, Unbreakable tends more towards a family drama than it does a superhero film. Dunn is not a good man – we first meet him, having been turned down by a woman, putting his wedding ring back on – and nobody knows this more than his son (Spencer Treat Clark). He desperately wants Price to be right about his father – not because it would make him special, but because it would make him the kind of man who would fight to keep his family together. This desire manifests in several ways, both sweet (the weightlifting scene) and deeply tragic (when Dunn refuses to acknowledge the possibility, his son threatens to shoot him to prove his gift). The emotion is there in Dunn’s wife (Robin Wright) too, no more so than after his confrontation with the Orange Man – the camera focuses on her face, full of love and remembrance, as Dunn carries her up the stairs.

The film’s climax hits two big beats – the day after, the parents are talking to each other again. Dunn slides a newspaper across the table to his son, indicating the headline about the encounter with the Orange Man – his son can barely hold back his tears and smiles, his faith in his father renewed. Its dialogue-less and very emotional, the restraint making it far more powerful. Then, onto the mandatory twist ending – it transpires, through another vision, that Price is the supervillain to Dunn’s hero. It is both surprising and massively obvious (it has been hinted at throughout the film), and it speaks to a deep tragedy on Price’s part – he engineered tragedies to find Dunn because he needed him. Because of his physical condition, he doesn’t believe his life could have meaning without a counterpart.

it suffered by being ahead of its time

Unbreakable is a very powerful and understated film, and it suffered by being ahead of its time – there just wasn’t the audience for its realistic ‘superheroism’. But hopefully, with the release of Glass, a comic book-savvy audience will seek it out and enjoy it – it shows a director on form, pitching a deeply visual film that raises some big questions about meaning, and it is deeply entertaining to boot. Make sure you go and check it out.