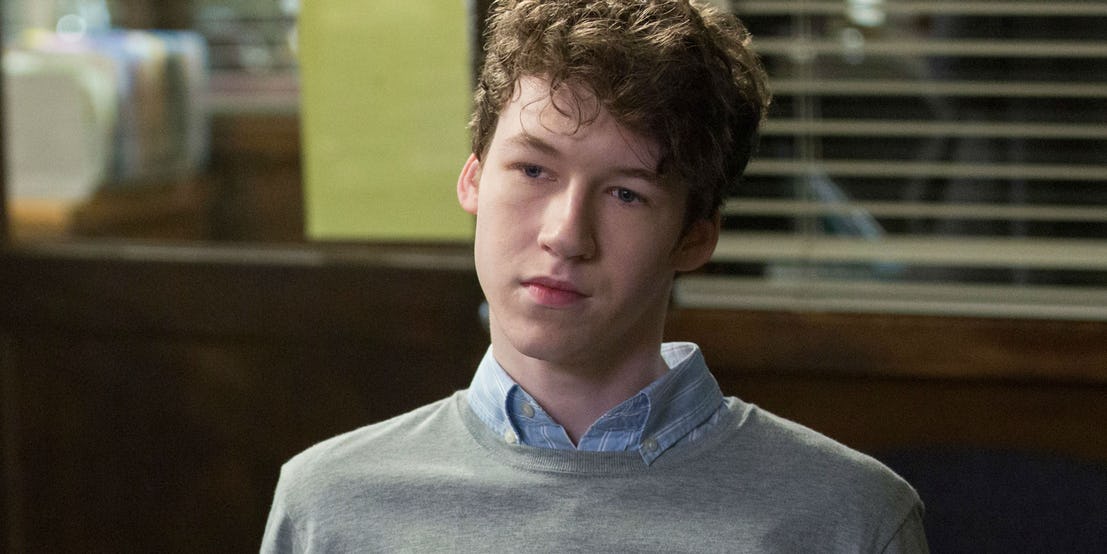 That 13 Reasons Why finale bathroom scene was horrifying, but necessary

There’s been controversy swirling around 13 Reasons Why since the first series was released last year, and this season has been no different. Much of the new criticism centres around a scene in the finale involving Tyler, recently reformed and placid after a stint in a diversion programme for troubled teens. Monty, revealed to have been tormenting those on the tapes, violently assaults Tyler before raping him with a mop handle.

The first time I watched the scene, I wasn’t paying attention. I caught the last few moments and wound it back because I couldn’t quite believe what I had just seen. The second time, my stomach dropped and I felt physically sick. The third time? I realised my knee-jerk disgust was exactly why it was necessary. In a season that revolves around a trial that victim-shamed Bryce’s victims – dismissing their experiences because they’d been drunk or high, or had gotten into the hot tub willingly, or continued to stay loyal to their rapist because they loved them – the bathroom scene served as a reminder: rape isn’t about sex. It’s about power. Monty, an overtly homophobic character, doesn’t rape Tyler because he finds him attractive, or because his advances were rebuffed, or because Tyler’s unconscious and vulnerable. He rapes him because it serves to humiliate and demean Tyler, and because, simply, he can.

Much of the criticism revolves around the sheer brutality of the scene, that it’s gratuitously violent and scarring. The irony seems to be lost, then, that that’s the reality of sexual violence. Rape scenes with artistic videography, dim lighting, and smoke and mirrors detract from the sickening, violent reality of rape. There are parallels between Hannah’s rape and Tyler’s. They’re both assaulted from behind, held down. Their faces are in shot so we can see their emotions. They’re both audibly in pain. Neither of the rapes in season one – Hannah’s or Jess’ – got the same sort of backlash as Tyler’s did.

So why is a scene where a woman is raped is any more acceptable than a scene involving a male victim? Has female sexual violence become so commonplace that we’ve become immune to it, and the shock factor emerges from the fact, for once, there’s a portrayal of sexual violence against men? We need to ask ourselves why we are disgusted, why we feel that a man being raped is any more horrific than a woman. A lot of the criticisms have skirted around the issue, saying that Tyler was sodomised. While technically true, synonyms only detract from the message. Tyler was raped. He was raped on screen, like two other characters, neither of whose attacks got anywhere near the same level of disgust and outrage.

We need to ask ourselves why we are disgusted

I don’t agree with the sequence of events after the rape. What the rape scene achieved, however, was to remedy the ills of the characters’ narratives around rape leading up to that point. The way that Hannah’s romantic and sexual history was used against her in Bryce’s trial; the way that Jess’ vulnerability as a result of alcohol placed the responsibility of her own rape on her shoulders. The rape scene served an important purpose of reminding us that the narrative around rape has been skewed to always place responsibility with the victim, because as far as the viewer is concerned, nothing that Tyler has done has ‘justified’ the rape. The rape scene wasn’t about sex and lust. The rape scene was about power, and that’s something no amount of modesty or self-restraint or isolation will ever fix.

13 Reasons Why is by no means unproblematic, and the rape scene doesn’t resolve its shortcomings. But calling it unnecessary, or graphic, or disgusting, only serves as a reminder as to why we need representation of male rape. And for that, 13 Reasons Why should be applauded.