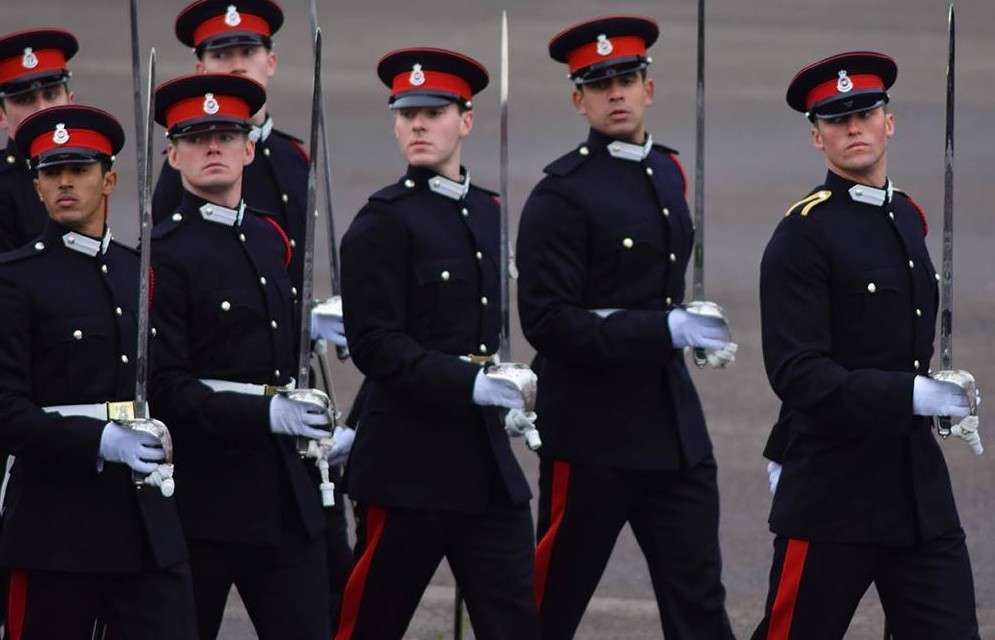 Boyles is second from left in the middle row

That is precisely what David Boyles (now Lieutenant) did, after graduating from Warwick in 2014. He had completed an undergraduate degree in English and American Literature, a Masters in Poetry and Poetics, and an Masters in Fine Arts at the Warwick Writing Programme, which saw him reimagine the Avant Garde magazine BLAST for the digital age. It feels like an understatement when he says, “I got quite into that creative writing stuff”.

It feels like an understatement when he says, “I got quite into that creative writing stuff”

A career as an academic was Boyles’ ambition until he presented a paper at a conference in Paris, to an audience of academics who were “a terrible advert for the kind of life I was aspiring to… they seemed really unhappy”. He was also influenced by a TED Talk which proposed that “bodies are just a bus to get the brain from meeting to meeting”; instead, he wanted a job where his brain and body could work in tandem.

And so, to his family and friends’ shock, he decided to apply to the army. “I cannot emphasise how poorly prepared I was,” he says. “I didn’t know any of the terminology. All the stuff I did know was from American war films.” I suggest that it was brave of him to persevere regardless. “Bit naïve, I think,” he laughs.

But even if his cinematic choices hadn’t prepared him well for life in the Army, his extra-curricular pursuits at Warwick had. He played for the Wolves, Warwick’s American football team, for five years. He also became a Residential Tutor. The latter especially was “an all-encompassing thing” and not just because he had to “be there when people came in drunk with no key”. Teaching him “teamwork and hard work” and “planning and strategy”, the two activities were formative influences.

Even if his cinematic choices hadn’t prepared him well for life in the Army, his extra-curricular pursuits at Warwick had

A visit to the Educational and Training Services (ETS) changed Boyles’ infantry ambitions. He’d never heard of it before – it comprises only around 300 of the Army’s 82,000 employees – but within 24 hours he’d decided that it was “awesome” and the team he wanted to join.

The role of the ETS is more self-explanatory than its obscurity might suggest. Anyone from new recruits to long-term Army employees come to them to learn about international relations and politics, as well as skills such as analysis, planning and flexible thinking. In an adult educational context, Boyles says, “it’s quite unique”. In one classroom he will have people of vastly different educational experiences, and “some people who are really buying into it and some people who really aren’t.”

So how do you get on board those that don’t seem interested? “More than people not engaging, it’s people who have that fear of the classroom, who might not have had a good time at school. You have to convince them they’re not at school anymore, otherwise they go into that mind-set where they sit at the back and try to survive.”

In an adult educational context, Boyles says,  the ETS is “quite unique”

“You have to make it relatable – it’s classic human psychology. Different things will appeal to different people, so you have to make sure there’s a variety.” And, he points out, “I have a much more engaged audience than my friends doing Teach First. Discipline is no problem.”

Often in the ETS, you get told “the end state you need to achieve”. It is up to the individual to decide how, say, you will improve the analysis of a group of recruits over a course of ten weeks. Given his background, Boyles recourses to literature. “Reading something can change the way you think; really good literature will do that. That’s exactly what I’m meant to be doing, so why not use what I know from literature to do it?”

Boyles adds that, “With so much freedom you have to make sure you’re not just teaching a lesson that you’d want to do – you have to keep recruits in mind.” But generally, the reaction is positive. “Once you let them know that unless they say something really out there, it’s not going to beyond the four walls, they respond really well. They open up and have some really interesting perspectives.”

Given his background, Boyles recourses to literature to improve recruits’ analysis

“As long as you’re not too dictatorial, if you just put it out there and let people have their own take and complain about it, you end up catching people getting quite into it.” It helps that he’s an officer in a strictly hierarchical system: “Because soldiers have a certain idea of what an officer is, you can get away with being eccentric!”

I put it to Boyles that he’s doing more than just training people’s minds. He is enacting an inclusive form of masculinity. So often, I suggest, boys are divided into the bookish poetic types, and the physical sporty types. He is combining the two.

Boyles disagrees: “The two types of boys are not as different as you might imagine”, especially at Warwick. After all, Warwick’s sports teams are made up of young men who “are at Warwick for a reason [they are smart academic types], they just happen to be interested in a particular sport. There’s a jock stereotype, but once you actually get into conversations with people, there’s a surprising amount of academic stuff that goes on.” His experience in the Wolves is that people joining the team as freshers ask the older years about their courses: “There is a level of, definitely informal, but academic mentorship.”

“There’s a jock stereotype, but once you actually get into conversations with people, there’s a surprising amount of academic stuff that goes on”

He takes as another example the World War I poets whose work he often uses in his classes. Some of them were “quite amazing. Wilfrid Owen or Siegfried Sassoon, or people who were pushing it further like Isaac Rosenberg, they were these amazing heroic figures on the battlefield, and wrote these fantastic, for me anyway, pieces of poetry.”

He also points to the epic tradition: “All of the key poems were pretty war-y, the Iliad is pretty war-y.” The point is that, “Back then it was much less of a distinction. Poetry was more mainstream.” So actually, the two ideas of masculinity I referred to “says more about our culture now than what naturally occurs.”

He apologises for his long answer, but I can tell he’s thinking further. And indeed he delivers a conclusion befitting an arts student’s nuanced thinking: “The real fighting part of the army is not that big a part of the army. It’s not like many people are living in trenches and firing rifles all the time. So I guess what I’m trying to say is that the army is less war-y than you might think, and poetry is less pretentious than you might think. And somewhere in the middle they meet up.”