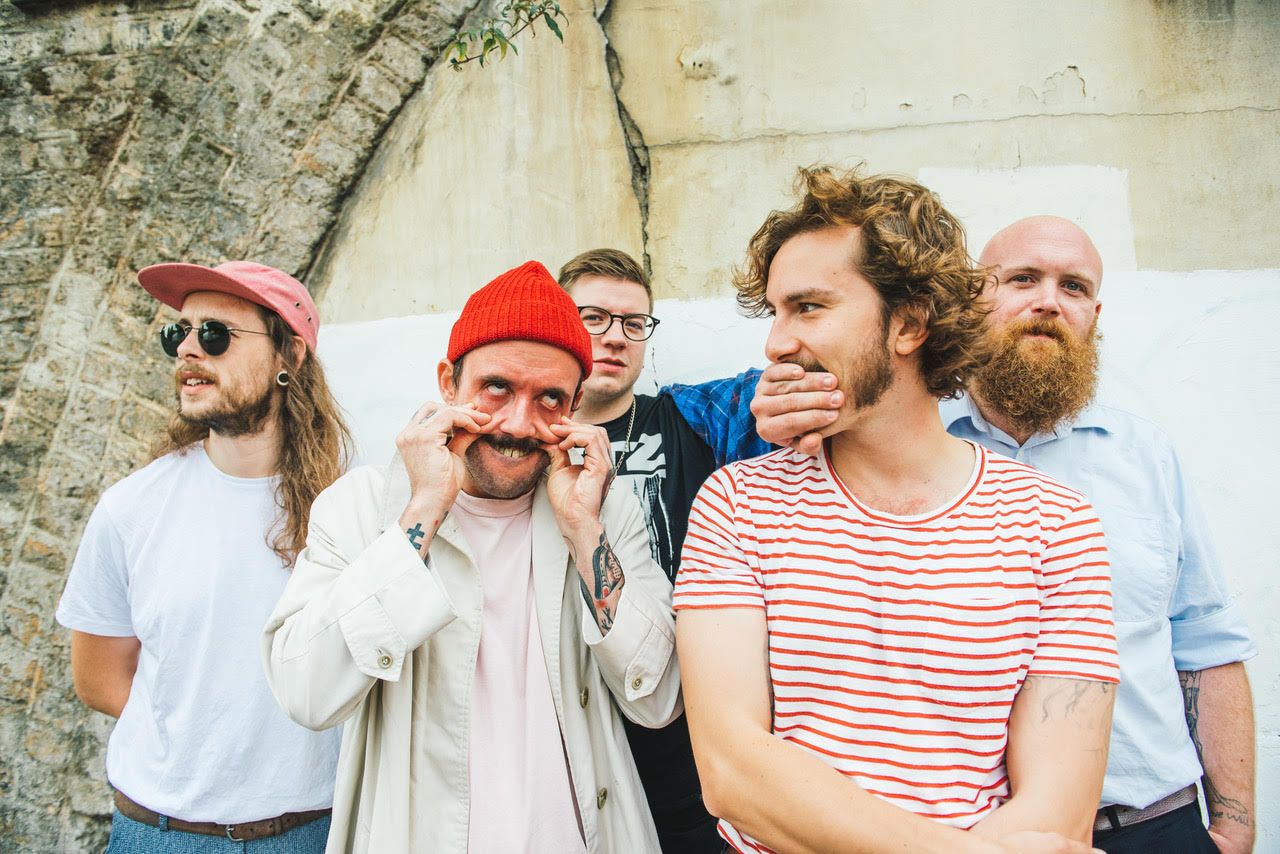 Libraries are a place of serenity. They are a cultural hub where people delve into works of literature, learning about common histories and contemporary issues, or getting lost in stories of worlds beyond ours. They’re a sacred space of quiet meditation – so the last place where you would expect, for example, a moshpit. Having said that, in Coventry Central Library on the evening of April 14th plenty of moshing was had as Bristolian band IDLES shattered the silence with a pummelling, thunderous, adrenaline-fuelled gig. Punk-rock is the last kind of music one would expect in a library, yet IDLES playing there makes perfect sense. They are currently touring their sublime debut album of last year, Brutalism, which is packed with biting social commentary on the state of the nation. Feeling somewhat winded after an hour of throwing myself into a heaving mass of liberated bodies, I sat down with frontman and lead singer Joe Talbot to chat about the increasingly entwined relationships between politics, books, and music.

You guys formed in Bristol. How do you think forming in that place affected the nature of your music?

I think that we were allowed to do what we wanted to do in Bristol, because there wasn’t a scene or anything. Differences are celebrated but there’s no Bristolian sound. I mean, obviously there is, with the whole trip-hop thing, but with that being a generation before us people just kind of celebrated each other’s differences as bands. We all enjoyed each other’s idiosyncrasies.

Brutalism is a deeply political record. Those shout-outs you did at the gig drew upon political issues, such as the NHS and immigration. How important do you think the role of music is in political resistance?

I think it’s a good vehicle for political resistance. Funnily enough Bob Marley is a great example of how music can change politics. In this country, it’s a good way of opening up conversation in communities, but the music itself is never going to change anything. Anyone who thinks that can’t see through the smokescreen of how media and the conglomerates are set up. You’re not going to get past algorithms these days to actually make change; you need activism. Music is just a good vehicle for opening up discussion, even if it’s negative.

Being a punk band, how important do you find the DIY approach to making music?

(hesitates) I don’t know. It depends on what kind of music you make. It helped us, it really helped us because we didn’t have any pressures to make stuff at certain points or people telling us what to do. We just took time figuring out what we loved, but if you’re a solo electronic artist you want to get signed to a label that can release your songs. Doing it yourself is something I applaud in this day and age, because it means you’ve got to work a job on top of that. The romance behind it is there, because it’s not an easy route, but realistically if you can get signed to a label or get a booking agent or a manager that shares your ethos and is willing to work hard for what you believe in artistically, then do it. Don’t bite your nose off despite your face.

Would you say that approach is applicable to other kinds of art? You talk about it a bit in ‘Stendhal Syndrome’, my personal favourite from the album.

Well it’s fine art, you’re pissing against the wind. There’s a lot more money to make in music if you’re a fine artist, you’re probably going to be doing it yourself. That’s a fact.

But in any sense of the word, the government has instilled a certain ideology which means that the arts aren’t taken as seriously from the education system upwards. It really is a shame – there should be more support for young musicians and young artists to get somewhere. Doing it yourself is a necessity. If I could choose, I would love to be in a country where young people are supported by the government to find out how they express themselves best.

You say in the song ‘Mother’, that “the best way to scare a Tory is to read and get rich”, a fitting lyric considering that you’re playing in a library. Which books have particularly influenced you?

I’m not going to lie, I only started reading later on in life, in my mid-twenties. I basically read about ten books when I was about ten and loved it, and just stopped I got lazy and didn’t think about books until I broke up with an ex-girlfriend. My dad said that books would be a really good tool to focus your energies on something, take you out of your world for a bit, and exercise your imagination until you come back to reality. It uses parts of the brain that just for some reason helps your being.

If you’re reading newspapers, you’re reading opinions – but if you meet people of different cultures, places, genders, classes, races, and sexualities, then you learn that there’s a lot beyond people’s politics

Yeah, so it was that period where I started reading properly. I only read and loved about 20 books, but the one that really helped with the album was The Descent of Man [by Grayson Perry]. It’s about the problematic nature of masculinity in British and Western society, it’s a really cool book. Reading a bunch of different books helped my writing because my imagination was stretched, and I realised the more I read, the more I found my own language. There’s lots of different ways to say the same thing. My favourite book from that time Giovanni’s Room [by James Baldwin]. It’s a about a man that falls in love with another man in Paris, and a tragic story unfolds. It’s really fucking cool. There’s a very delicate, intense chapter of him falling in love with a guy.

Sounds beautiful. To return to ‘Mother’ and books, the song taps into the idea of indoctrination. Are books the best way to get the public informed?

No. To be informed as a public you’ve got to talk to each other because if you’re reading newspapers and such, you’re reading opinions, but if you meet people of different cultures, places, genders, classes, races, and sexualities, then you learn that there’s a lot beyond people’s political choosings, and that humans are in the same wanting group. They want to feel safe, they want their families to feel safe, and to have equal opportunities. That’s everyone, not just me. You can get away from just saying “you’re a racist prick mate”, and you start having discussions, and you learn more.

The obsession with the self is a divide and conquer tactic. Today everyone feels, even in their narcissism, that they’re being socialist

You could argue that social media has separated people in dehumanising them through a screen.

Exactly, it’s very easy to say what you want online.

It is, and it’s getting worse sadly.

And it perpetuates the divisions between rich and poor, and the underlying sense of individualism in Britain, borne of the Thatcher period. Not just economically, but socially too.

Absolutely. The obsession with the self is a divide and conquer tactic that’s worked beautifully. Now everyone feels, even in their narcissism, that they’re being socialist.

Okay, just to wrap up. Brutalism is in-your-face political throughout until the last track, which seems like it comes more from a personal place. Is it connected significantly to the themes of the album, or is it just a good closer?

None of them are overtly political, they’re all personal. ‘Mother’ was learning about a woman. My mum was a woman, as opposed to just a mother, a vessel to carry me in, to put me onto this earth, and to work for me to feel safe. It’s about seeing her as a woman and a friend. ‘Date Night’ is about realising that I was feeling very alone in the dating world, and how ridiculous that is. They’re all kind of personal vignettes, but they all become allegorical politically. ‘Slow Savage’ is just a song that is in no way political, it’s just about me realising how much of an asshole I was to my ex-girlfriend.

So would you say that as soon you talk about something personal, it becomes political?

Yeah, politics is collective personal thinking, isn’t it? It’s organising people’s wants and needs, which is love and compassion, food, and a roof.