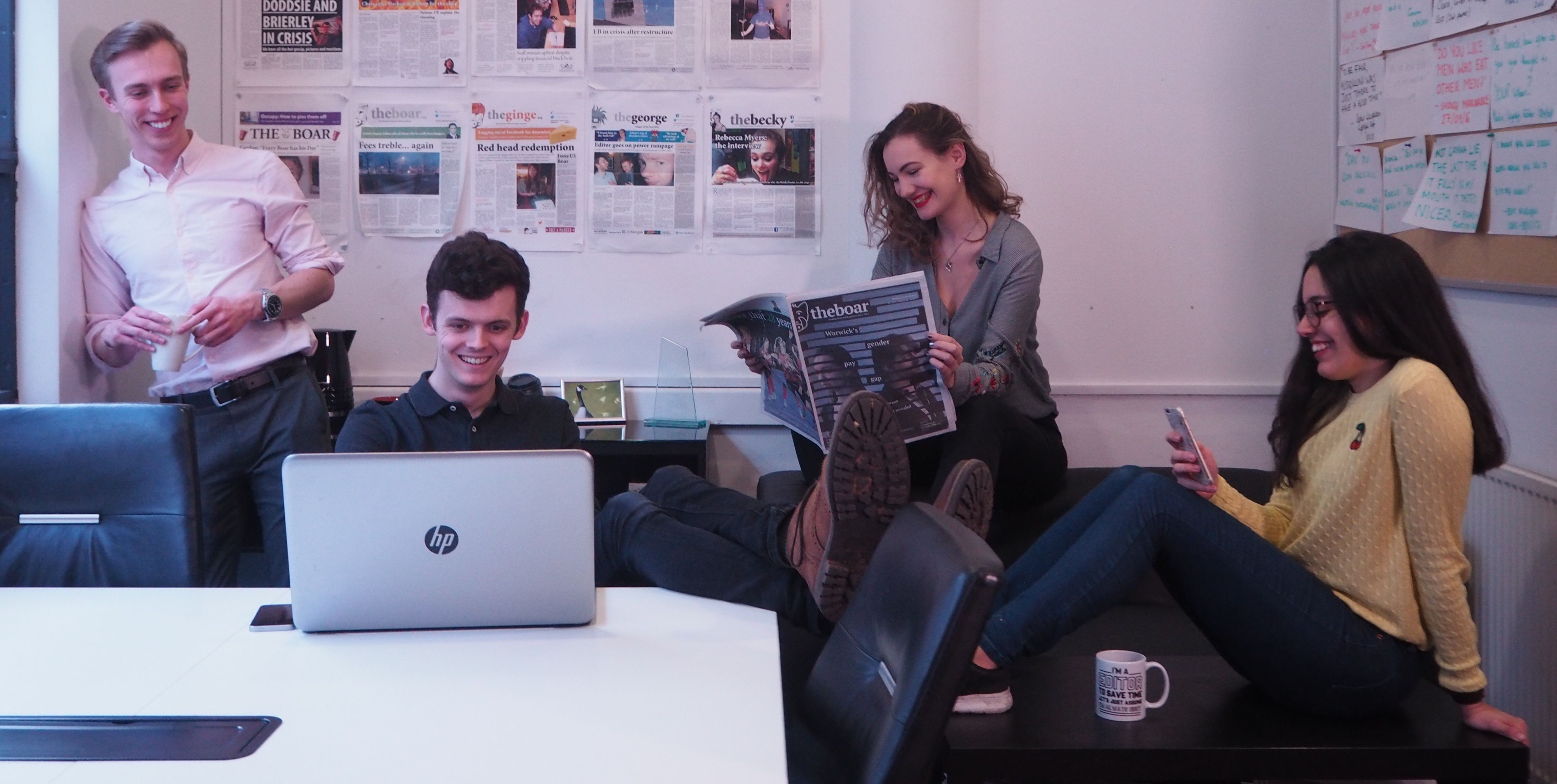 “When I try and talk about The Boar, it’s often hard to articulate quite how much this society means to me. It’s hard to show someone 32 print pages and expect them to understand the gravity of what lies behind them. But perhaps that was my fault, because previously I’ve focused on the wrong things.

From my second week of university I’ve been part of this mad rollercoaster of emotions, and in that time I’ve witnessed something more than a team at work; I’ve witnessed a family and its legacy, one that spans from now right back to Kasper and Godfrey sitting in that pub in 1973. This paper is, at its heart, a product of love built by hundreds of editors with a collective vision of single ideal and a single name, that of The Boar.

It’s a love that I saw in my editor, Ali, who took a chance on hiring me when I was just a fresher; in my first EIC Hiran, who taught me never to settle for less than what The Boar deserved; and in my second EIC, Shingi, who showed me that The Boar was at its best when it was amplifying oppressed voices.

Yet, most notably, I’ve seen this love in my Co-Editor, Clara. In my three years with the paper, she’s been a constant source of inspiration and strength for me, and she’s never failed to impress me with her endless drive and boundless passion. She embodies everything The Boar stands for.

So, for all the stress, for all the pain and all the frustration that I’ve endured over the last year, I wouldn’t change a second of it, and I wouldn’t change those with whom I’ve done it all. Though they may not know it, I love them all deeply, and will treasure our memories and achievements for the rest of my life. I can only hope that, through my work, I’ve helped them all to love The Boar too”

“I spend so much time thinking about this publication that my flatmates have started claiming that personality is 80% Boar (and 20% Vialli’s garlic cheesy chips). They’re not wrong. Ever since I joined the team in November 2015, most of my life has revolved around this paper, whether I’m thinking about our membership count, our social media following or our website statistics.

But The Boar means so much more to me than these arbitrary numbers. It means a group of people who have seen me at my highest and lowest yet still cheer for me. In other words, The Boar is my family.

However, I wouldn’t be in this position today if it wasn’t for a couple of people who have supported me throughout this time. So, here’s to my wonderful flatmates, Lauren, Sarah and Branca, who have consistently listened to all of my rants, and accompanied them with the cheapest wine they could find.

In other words, The Boar is my family

Here’s to Shingi, my previous editor-in-chief, for encouraging me to go for this role in the first place. Here’s to Connor and Hiran, from my first year, for making The Boar such a welcoming society when I was a fresher. Here’s to my incredible executive team for all their hard work this year.

But most importantly, here’s to Cameron. There aren’t enough words to explain how much you mean to me. When we made our elections speech a lifetime ago, we claimed that our strengths complemented each other. Now, twelve months later, I realise that we couldn’t have been more wrong. It’s not our skills that have prepared us for this job, it’s our work ethic, tenacity, and everything else in between. From eating chips in your car at 10pm on a Tuesday to our relaxing spa day out, I just wanted to take a moment to say that I couldn’t have done it without you, and I wouldn’t have wanted to either.

And on a final note, here’s to you. Whether you’re an avid reader of The Boar, or someone who has picked up the paper once, thank you from the bottom of my heart. You are the reason I get to do this, and I’ve loved every second of it”

“By some sort of miracle, I have made it to the end. I have been a student at Warwick for almost 4 years, and half of that has been taken over by The Boar.

I am duly obligated to thank this paper for introducing me to some wonderful people who have graciously tolerated my insanity for all this time. Clameron and Elliot; it has been a pleasure working with you all.  I must also thank the immortal Mike Wrench for giving me a job here in the first place, much to the benefit of his ego. I suppose it should also be noted that I got a girlfriend from being here; testament to the aphrodisiac powers of student media.

All of my love to the mighty Puzzle page. It was an honour to curate the most popular section of the paper and finally live my dream of being a tabloid horoscope mystic. There are only a few things I have left to say before I leave The Boar and Warwick, and finally become a bonafide grown-up.

I have been a student at Warwick for almost 4 years, and half of that has been taken over by The Boar

Being gay is great. In fact, being exactly who you are is great. Life gets better the moment you accept that and find the people who will love you regardless of your identity. Kesha is the finest musician to have ever existed. There is no reasonable argument against this sentiment. Sharks are the best creatures of all time. They have survived as a species for millions of years literally because they are bad-ass. Save the sharks, people. Even the greatest need a little help sometimes.

Sexual violence on campus is a huge problem. Pay attention, raise awareness and support survivors. Nothing will change while we remain oblivious to an issue which affects so many students. Don’t be a dick. People are going to have opinions which are different to your own. Get over it. If you refuse to challenge your views, you will never develop as a human being.

Now I’m going to start a full-time job, move in with my girlfriend and our gaybies, and probably rescue a pet rabbit and call it Ralph.

See you all at the bar; it’s been a blast”

“In the words of Richard Nixon…

This is the 15th time I have spoken to you from this paper, where so many decisions have been made that have shaped the history of student journalism on campus. Each time I have done so to discuss with you some matter that I believe affected student interests. In all the decisions I have made in my public life, I have always tried to do what is best for The Boar.

Throughout this long and sometimes difficult period, I have felt it was my duty to persevere, to make every possible effort to complete the term of office. In the past few days, however, it has become evident to me that I no longer have a strong enough political base in The Boar office to justify continuing that effort. I have never been a quitter. To leave office as soon as my term is completed is abhorrent to every instinct in my body. But as Deputy Editor-in-Chief (Digital Media), I must put the interests of the Boar first. The Boar needs a full-time DEIC and a full-time exec.

In all the decisions I have made in my public life, I have always tried to do what is best for The Boar

Therefore, I shall step down from my DEIC role effective at noon tomorrow. Vice President RON will be sworn in as DEIC at that hour in this office. In passing this office to Vice President RON, I also do so with the profound sense of the weight of responsibility that will fall on his shoulders tomorrow and, therefore, of the understanding, the patience, the cooperation he will need from all readers. By taking this action, I hope that I will have hastened the start of that process of healing which is so desperately needed in The Boar. When I first took the oath of office as DEIC a couple of months ago, I made the sacred commitment, to “consecrate my office, my energies, and all the wisdom I can summon to the cause of peace among section editors.”

To have served in this office is to have felt a very personal sense of kinship with each and every reader, writer and editor In leaving it, I do so with this prayer: May The Boar’s grace be with you in all the days ahead…”