Hindsight and our warped perception of Star Wars: Has retrospection ruined The Last Jedi?

* This article contains major spoilers for The Last Jedi *

Hindsight is both a wonderful and terrible thing, so the old adage goes. This is a truth many of us hold to be self-evident; it’s easy to look back on past events with a wistful romanticism that may never have quite existed in the moment, whilst at the same time wishing that we’d done things a little differently. Yet as L.P. Hartley once stated “The past is a foreign country; they do things differently there.”

In cinema, the effect of hindsight is becoming increasingly apparent with the rise of the franchise as an institution within Hollywood, and in no series has this become more apparent than Star Wars. The release of The Last Jedi has highlighted a clear contrast in expectations between fans of the series, and with an audience score of 56% on Rotten Tomatoes at the time of writing, it’s evident that this film was not what many expected.

This would be understandable if it were, objectively, a failure as a movie. However, this isn’t the case. Despite its dramatic tonal shift and its more controversial plot points, moment to moment it succeeds as a well-crafted and emotionally impactful film, as well as an evolution of the Star Wars saga. So why the disappointment? We can partially attribute this to hindsight.

In cinema, the effect of hindsight is becoming increasingly apparent with the rise of the franchise as an institution within Hollywood, and in no series has this become more apparent than Star Wars

Many viewers left The Last Jedi feeling as though the questions that arose in The Force Awakens were left either unanswered, or concluded in an unsatisfactory manner. The revelation of Rey’s parentage was not the bombshell many anticipated and the long hoped-for contextualization of Snoke’s character simply didn’t come. Instead, by the end of the film many viewers were left with more questions than ever. These are valid criticisms of the film, yet they are entirely in keeping with style of the original trilogy, which Johnson attempts to closely mirror. 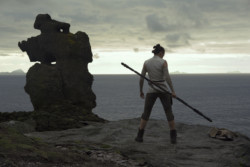 For context, let’s step back to 1983 and the release of Return of the Jedi. Here, Darth Vader and the Emperor are clearly established as the primary villains of the trilogy yet, by the close of the film, we still know very little about the two of them. We know that Vader was trained under Obi Wan before turning to the dark side, that he’s the father of Luke and Leia, and that he was injured at some point in the past – scant details for a major character appearing across all three films. We know even less about the Emperor. By the end of Return of the Jedi, we know only that he’s Vader’s master and a powerful force user, the rest being left to our imagination.

Many viewers left The Last Jedi feeling as though the questions that arose in The Force Awakens were left either unanswered, or concluded in an unsatisfactory manner

It was only with the arrival of the prequels that we were given significant context for the nature of these characters; Anakin’s fall from grace and the true identity of the Emperor, as well as his ascent to power. Despite the prequels many flaws, they did provide a sense of identity to these characters, and over the course of 40 years they have brought them to life.

It is because of this that we risk expecting too much from the new trilogy. Disney has attempted to largely cut back on the expositional bloat that weighed down the prequels, yet as viewers, we come into these films expecting answers to the wealth of questions and expectations that have built up around a universe that is too large to be effectively encapsulated in a two-and-a-half hour film. It cannot answer all of these questions, nor would it to be wise to. Context is key to emotional impact, yet an attempt to explain every possible aspect can only ever lead to a slow film that falls into the same traps as the prequel films; a trilogy horribly weighed down in its attempt to contextualize anything and everything.

Disney has attempted to largely cut back on the expositional bloat that weighed down the prequels, yet as viewers, we come into these films expecting answers

To see this new trilogy for what it truly is, and indeed to appreciate The Last Jedi for what it attempts to do, we must strip away much of the extraneous detail that have mythologized and aggrandized the original trilogy past what it was ever meant to be. The Last Jedi is, in many ways, a slap in the face. It reminds us of what the series once was; a tale of individuals rising from nothing to face down a threat, long before the universe became condensed into one intimate family drama. Only once we remind ourselves of this, absent of the baggage that precedes it, can we recognise this trilogy as a true and effective progression of this series. We must shatter our preconceptions of Star Wars or else we’ll only find disappointment in the new films moving forward.