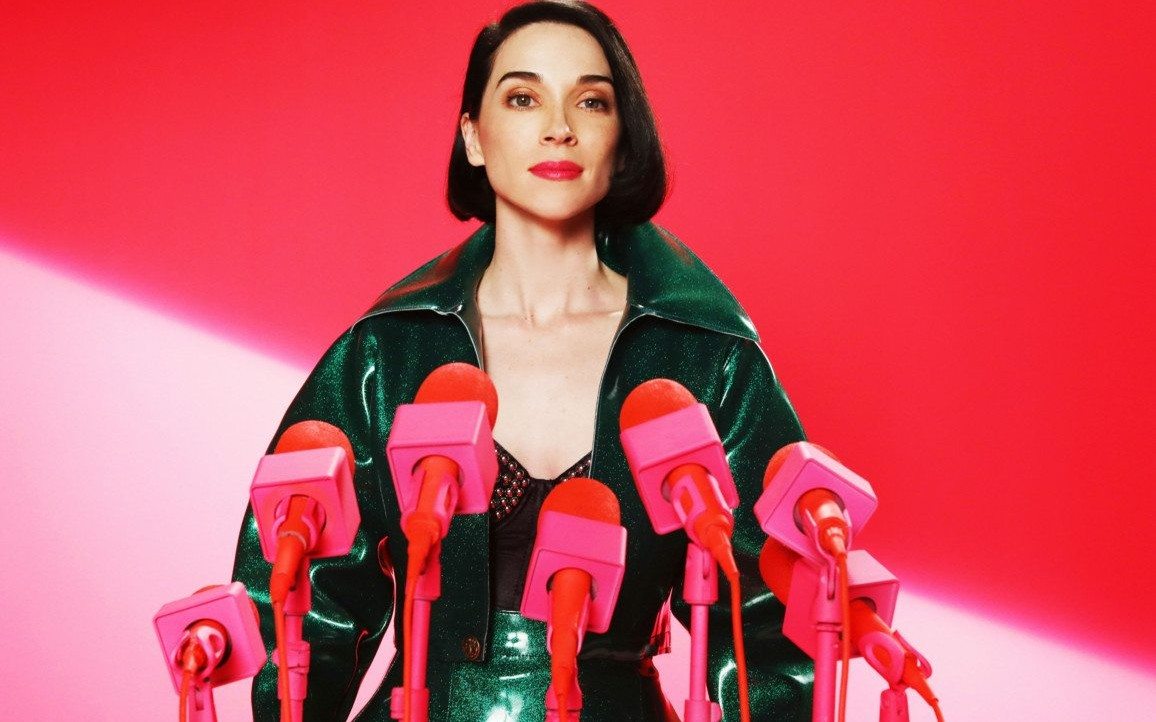 St. Vincent intimately explores the tests of love and Hollywood culture in MASSEDUCTION

There are periods of time in anyone’s life where you meet a crossroad. The emotional turmoil that comes with this testing moment is captured poignantly in MASSEDUCTION, celebrated indie queen, Annie Clark (aka St. Vincent)’s fifth studio album. After dating model and actress Cara Delevigne for two years, it seems that their relationship has profoundly affected her. Having been such an integral part of Clark’s life for that time, the recent memory of what they had together still intrudes into every aspect of her art: the visual style, lyrics and, surprisingly, music (Delevigne provides backing vocals for ‘Pills’).

In the lead single, ‘New York’, a gorgeous but driving piano ballad, there is this overwhelming sense of emptiness expressed in the lyrics that tell of losing someone great. It is almost as if her hometown now seems like a desolate wasteland now that she lost her hero. Though there is no regret conveyed, as there’s an admittance of doing it all again, if she had the chance. From the outset of the album as well, with ‘Hang on Me’, this focus on the past is present, as she croons over a crunchy electronic beat, that buzzes and scratches to and fro, how “you and me / weren’t made for this world”, positing them both as outsiders to the world they inhabited together.

Having been thrust into a lifestyle of excess once alien to her, St. Vincent goes in-depth on the culture of Hollywood

Having been thrust into a lifestyle of excess once alien to her, St. Vincent goes in-depth on the culture of Hollywood in ‘Los Ageless’, a synth-pop track that succeeds in painting a grotesque image of a place where child-actors are thrust into the spotlight by their parents, where alcohol and drug abuse is rife, and women are fetishised. “How can I leave?”, she asks – considering this portrait, I can see why. Clark also reflects on other effects the culture had on her personally. In ‘Pills’, she details her dependency on swallowing handfuls of medication that governs every aspect of living, from sleeping, to eating and drinking, even to thinking. The hook rings like a catchy jingle from a 1950’s era advertisement; it’s an immediate ear-worm.

This slickly plays in with the album’s whole musical approach, as MASSEDUCTION is much more pop-orientated than any of her previous efforts, although she still retains the indie and chamber rock influences, and, of course, her trademark noisy production. Tracks like ‘Fear the Future’ and ‘Sugarboy’ serve as a testament to this, the former of which features earth-shattering guitars, appropriately mirroring the apocalyptic prophecies of the world splitting into two foretold in the lyrics. And although not quite as dramatically, the latter also uses harsh noise to build upon song structures, as it gradually layers fuzzy feedback over busy electronics.

The hook rings like a catchy jingle from a 1950’s era advertisement; it’s an immediate ear-worm

The first half of the album is a thrilling ride to say the least, but as it moves into its second, the mood turns noticeably more reflectively melancholic. The aforementioned lead single, along with ‘Happy Birthday, Johnny’, ‘Slow Disco’, and ‘Smoking Section’ all share this crippling isolation, whether she wishes a past lover a happy birthday from afar, or she gets the sudden urge to leave the party to be alone. Especially the last song of this trio, where Clark describes sitting in the smoking area contemplating her own suicide. Although this is an emotional sucker punch to end the album on, this beautiful thought steps into Annie’s head to save her right at the end: “and then I think / what could be better than love?” It speaks for itself really, it’s the substance that we cling so crucially on to in times of crisis. This honest, intimate account of a relationship falling apart but still somehow feeling caught in the trap that is the Hollywood machine cements St. Vincent as one of the most consistently excellent musicians out there.