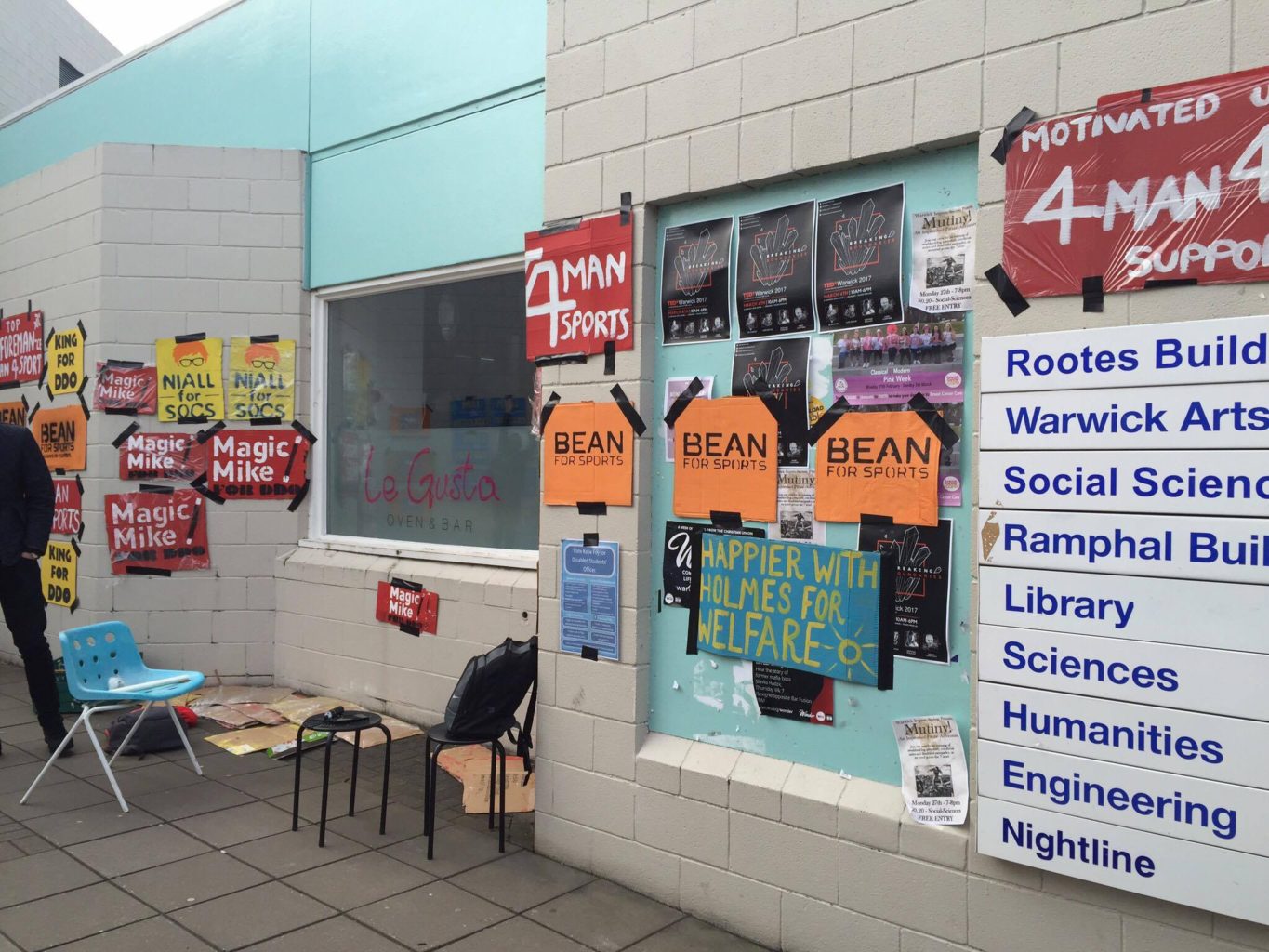 On Friday 3 March, the roof fell in on Warwick student politics. Or rather, it almost did. The Dirty Duck’s structural snafu occurred earlier in the day. Though this ensured none of the candidates were injured, it also meant the kitchen was out of action – bursting with any hopes of acquiring a burger to fuel a long night of election results.

9pm, that’s it. The campaign teams can relax – it’s all over. No more knocking on doors, no more forced conversation and no more dirty glances from freshers, incensed by the invasion of their privacy and time. Under a quarter of Warwick’s student population bothered to vote in this year’s SU elections. When asking students about their Union, one is generally met with apathy and a degree of disdain. “What do they even do?” seems to be the common refrain around campus.

The pub, on the other hand, was packed. Drinks were freely flowing, laughs abounding and talks about how whichever the way the vote went, we’d all end up in Kelsey’s. For people who had been so tirelessly campaigning for a week, the atmosphere in the Dirty Duck really didn’t seem reflective of what had elapsed.

As a whole, Warwick students are not the most renowned for their engagement with student politics, so to see such a scene was invigorating

As a whole, Warwick students are not the most renowned for their engagement with student politics, so to see such a scene was invigorating. There are students who care about making a change, with many trekking all the way from Leamington in foul weather to watch the events of the night unfold.

Early in the night, Ellie Martin was announced as the new Sports Officer, and her speech was an example of student politics at its best: “Thank you so much to Sophie Foreman for being such a wonderful person to run alongside,” she gushed. “Whenever we saw each other we were always supportive and messaged each other almost every day to make sure we kept eating and sleeping”.

However, as the night progressed and the decisions were announced, tensions began to build. The announcement of President was particularly charged, as the candidacy of current president of University of Warwick Conservative Association Alex Bevis, had divided voters.

The victory of Hope Worsdale was met with ecstatic reactions from her supporters, who cheered “No Tories, no Tories!”. Yet some bitter notes bubbled to the surface, sullying a night of general jubilance. A poster from the opposing campaign was vandalised, prompting an angry exchange as rivalry superseded shared goals.

As someone who both witnessed and was subjected to some unpleasant behaviour on Friday night, I think it was fair to say there was a bit of tension during the results party.

Speaking to the Boar, Hope commented: “As someone who both witnessed and was subjected to some unpleasant behaviour on Friday night, I think it was fair to say there was a bit of tension during the results party. However, I think the majority of the evening is spirited and candidates were being very supportive of one another. I think that after such a physically and emotionally exhausting week, it’s unsurprising that tensions were high in places – we’ve seen it many times in past years, and I don’t think this will be the last time.”

“The democracy team have actively sought ways to improve the welfare element of the results party and things have improved over the past few years; though there is always room for further improvement and I would encourage any students to get in touch with the SU democracy team if they have any feedback or suggestions in this area.”

Meanwhile, the event ended under a cloud. The unsuccessful candidates rubbed soulders with belligerent supporters on the buses back to Leamington Spa. The brave and the victorious headed to Kelsey’s while the vanquished, and mere mortals, headed to bed.