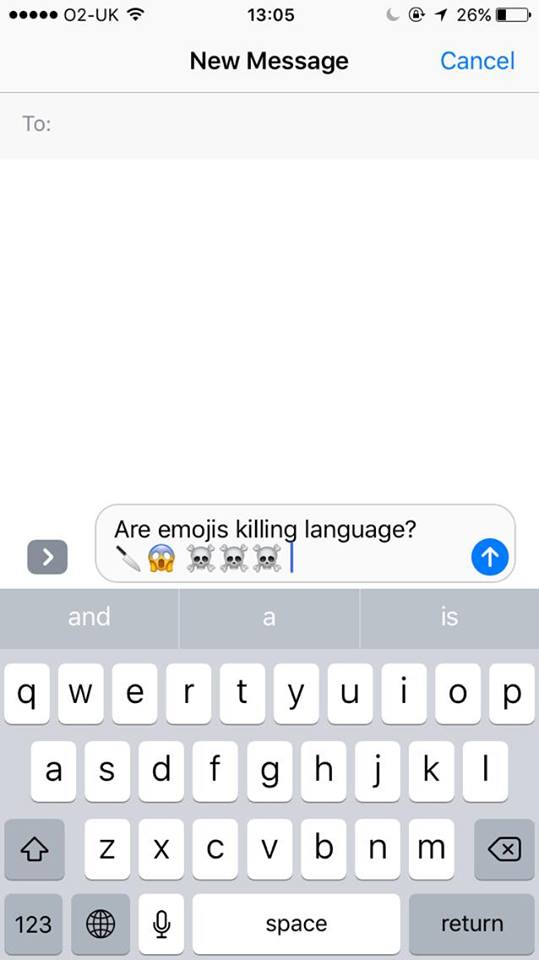 The recent iPhone iOS 10 update, heralded as faster, slicker and more beautiful than its predecessors brought several new features to Apple customers this August. The new flatter design sent people into paroxysms, and the lack of a lock screen left many limp. I was unperturbed by either as too lazy to download the new system and have been pressing ‘remind me later’ for the past three months.

However, recently (when using a far more organised person’s phone) I discovered something truly appalling. As I was typing my text the phone was suggesting that I replace the words I was using with emojis. I’d like to note here that I am no ‘text purist’; I am sure that if the English department discovered my Twitter account I would be removed from my course. However, I resent that an update by a brand that is synonymous with innovation, is attempting to render my words obsolete.

Jony Ive, Apple’s Chief Design Officer, in a foreword to Apple’s recent photo book release, states that one of Apple’s design aims is to create: “objects that appear so simple, coherent and inevitable that there could be no rational alternative”. While this is a comment on design, it is also reflective of the entire ethos of Apple.

Is this update yet another indication of the visual shift that we, as a society, are forever rocketing towards?

We are met by orchards of Apple logos in lecture halls, and Android users are an increasingly rare breed. Apple products seem to be the most simple and rational choice, and because of this monopoly of the market, their actions have seminal repercussions. Is this update yet another indication of the visual shift that we, as a society, are forever rocketing towards?

A picture speaks a thousand words, yes. But an emoji cannot express the myriad of meanings that language allows for. An emoji cannot pinpoint a specific meaning like the words ebullient, or halcyon, or serendipity. And while I am entirely aware that these are words that are unlikely to be a) replaced by an emoji, or b) used in a text, I worry that this update is indicative of our appreciation of language in the twenty-first century. Even the OED’s Word of the Year 2015 was the ‘Face with Tears of Joy’.

A picture speaks a thousand words, yes. But an emoji cannot express the myriad of meaning that language allows for.

We must rejoice in the power and beauty of language, for without it human expression will be reduced to mere coloured pixels on a screen. Words are an expression of individual thought, without them we are left like Winston in 1984, desperately clutching on to the remnants of a disappearing language. Perhaps I am being dramatic; emojis are just images used to enforce meaning and promote brevity and shouldn’t be seen as the reflection of the internalisation of capitalism in modern society.

But at the same time, what are we to think of recent claims that Drumpf’s electoral campaign had an emoji which should have automatically accompanied the #CrookedHillary hashtag, which Twitter then restricted? Emojis are not powerful, or even harmful tools of communication that require discussion, are they? Maybe I just need to move with the times and embrace the emoji. To paraphrase George Orwell…“But it was all right, everything was all right, the struggle was finished. He had won the victory over himself. He loved…Apple.”