The Threepenny Opera, Brecht’s ‘play with music’, is at first glance an ambitious choice for the intimate studio theatre in the Warwick Arts Centre, due to its series of challenging musical numbers and Brecht’s famous alienation effect which seeks to detach audiences from onstage action . Nonetheless, it is impressively pulled off by Opera Warwick in collaboration with Codpiece. This Steampunk-inspired performance manages to engage, and often directly interact with its audience without compromising the intentions of its source material.

The minimalist scenery, consisting mainly of blocks and few props with no curtain, immediately makes a uniquely Brechtian impression by removing the illusion of theatre. This means that the cast are forced to carry out quick scene changes, which is mostly effective, although occasionally laboured in parts. However, Nic Miller’s strong direction alongside the work of movement director Kimberly Fennell allows the play to run smoothly and focuses our attention on the excellent performances within the ensemble cast.

This Steampunk-inspired performance manages to engage and often directly interact with its audience, without compromising the intentions of its source material.

Visually, the play’s costumes are a standout feature, imaginatively thought out by Isabelle Leong. The costumes enhance the audience’s understanding of each character’s background, from the Kubrick-inspired eye makeup of Macheath and his violent henchmen, to the sheltered Polly Peachum’s stunning gold dress, which acts as a picturesque contrast to the gothic black of the ensemble. Emily Taylor’s charming portrayal of Polly demonstrates both the sweetness and vulnerability which attracts the criminal Macheath, as well as a steely inner strength, which is showcased in her spirited performance of ‘Pirate Jenny’.

Josh Dixon’s Macheath succeeds in being both urbanely charming and callous, hypnotising the audience and the play’s characters, as he uses magnetism and powerful contacts to get exactly what he wants. However, the performance I enjoyed the most was George Almond’s snarling portrayal of the fraudulent ‘beggar King’, Mr Peachum. In both his vocal and physical performance he remained totally committed to his villainous character.

The staging of physical theatre in the play is a unique attraction.

Whilst Kurt Weill’s jazz-influenced score is expertly played by the live band, at times the performers’ diction would suffer as the intricate word play of the songs would get lost amongst the powerful orchestrations. Regardless, the play’s music is a triumph, with highlights including the ‘Cannon Song’, powerfully performed by Josh Dixon, Anthony Loftus and the ensemble, and the ‘Jealousy Duet’, where Julia Storm and Emily Taylor shine vocally while entertaining the audience as spiteful love rivals.

Furthermore, the staging of physical theatre in the play is a unique attraction, as the movement ensemble use their bodies to assume the shape of a horse, a clock and a prison, showcasing their versatility and proving how a lack of traditional props and scenery can enhance, rather than derail the cast’s performances.

The cast tackled head-on the complex inversions of Brecht’s play, making us question issues such as the relationship between crime and justice, homelessness and domestic abuse.

After a somewhat lengthy first half, it is in the second act that the play comes to life, although this is to be expected as the production is usually split into three acts. Brecht’s dark humour takes centre stage in Act Two, embodied in this standout line, performed with expert comic timing by Rachel Bitoun as Mrs Peachum to her newlywed daughter, “You’ll be a lovely widow.”

Ultimately, the cast tackled head-on the complex inversions of Brecht’s play, making us question issues such as the relationship between crime and justice, homelessness and domestic abuse, which are still extremely relevant to modern audiences. The Threepenny Opera’s deliberately self-conscious deux ex machina ending registers heavily on its audience’s consciousness, as we, like Mrs Peachum, reflect on how much easier life would be if we always met with saviours on horseback. Opera Warwick and Codpiece’s bold choice of production definitely paid off in this unique performance. 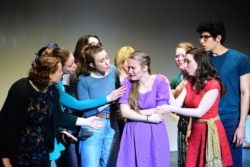