The new Captain America film has been an object of excitement for some time now, and having now seen it, I can confirm that the excitement is completely justified. This is a superhero film to beat.

After an operation goes wrong and kills some civilians, there is increasing public and political pressure for a system of accountability for the actions of the Avengers.

Some of the iconic moments are excluded, but this helps make a more tightly packed film that lays focus right where you want it

The team is split – Captain America (Chris Evans) believes that the heroes should remain free to defend humanity and do what they think is right without the threat of government interference, and Iron Man (Robert Downey Jr.) sharply disagrees, supporting oversight. As the debate escalates into a battle, heroes are forced to pick a side and comes to blows with each other. 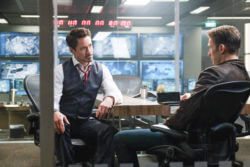 Being one of the cinemagoers who has read the Civil War comic books, I believe that this film does them justice to a scale I wouldn’t have thought possible. Some of the iconic moments are excluded, but this helps make a more tightly packed film that lays focus right where you want it – in the struggle between our two heroes (both Evans and Downey Jr. are incredible here).

It almost goes without saying for a Marvel film, but the major weakness of the movie is the villain. Daniel Bruhl’s Zemo appears intermittently throughout the picture, and his is a presence that is neither threatening nor particularly interesting – he is a damp squib in an otherwise exciting movie. His motivation is a nice little touch. and he is certainly the most believable of Marvel’s baddies by a long shot, but his plan relies a lot on happenstance and is it the least interesting aspect of the film. Civil War would’ve been a lot better had it focused solely on the heroes, and it is a shame that the movie didn’t have the courage to fully commit to its main storyline.

What a storyline it is, though. I’ve always thought that the Captain America films were Marvel’s best because they mix the fun and the action set-pieces with the smart and adult approach of a thriller, resulting in pictures that are substantive and mature as well as enjoyable. This film is a fantastic example of that – the central premise literally invites us to take sides and think about where we stand on these sorts of issues. Is collateral damage a risk worth taking to save other lives? Can standing for what you believe to be right make you a villain?

For a film that is ostensibly about heroes fighting, this raises a number of interesting moral and ethical questions – a clash of ideology is enough to turn friends into enemies. Marvel treats its audience with respect in approaching the issue; casting Iron Man – one of its most likeable and fun characters – as the antagonist was a move that could easily have backfired were it handled poorly, but there is no risk of that here. Both sides are presented equally, and the audience is given moments where they are both sympathetic and in the wrong.

The action here is simply incredible. If you were one of the audience members disappointed at the delivery of the titular fight in Batman vs Superman, this film is your compensation – the battle between the heroes is a frantic joy to watch: the sheer number of combatants, powers and abilities making it a frenzied experience like nothing else. There are times where you need to tell yourself to take a breath.

This is undoubtedly Marvel’s best set-piece yet, and the way it is presented here fills me with hope for Infinity War. It isn’t all action, however, and the film manages its emotional beats just as well (if not better).

There is a fair bit of Spiderman (Tom Holland), and he’s good. I found Black Panther (Chadwick Boseman) intriguing, and I’m very interested in seeing his solo movie (which will also feature Martin Freeman, playing bureaucrat Everett Ross). William Hurt’s General Ross makes a comeback and gets a more pivotal role to play, and Emily Van Camp’s Sharon Carter gets more to do – the foundation is truly being laid for the future, and I look forward to see both of them again.

Civil War would’ve been a lot better had it focused solely on the heroes, and it is a shame that the movie didn’t have the courage to fully commit to its main storyline.

When a film is as eagerly anticipated as this one, there is always a risk that it’ll fail to live up to expectations – here, to the contrary, it exceeds them. This is Marvel’s best film yet, and it sets a bar that the studio will have to work exceptionally hard to keep it up. It mixes an intelligent politic thriller, humour, enthralling action and characters we’ve grown to love, and comes out with something truly special. 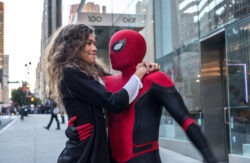