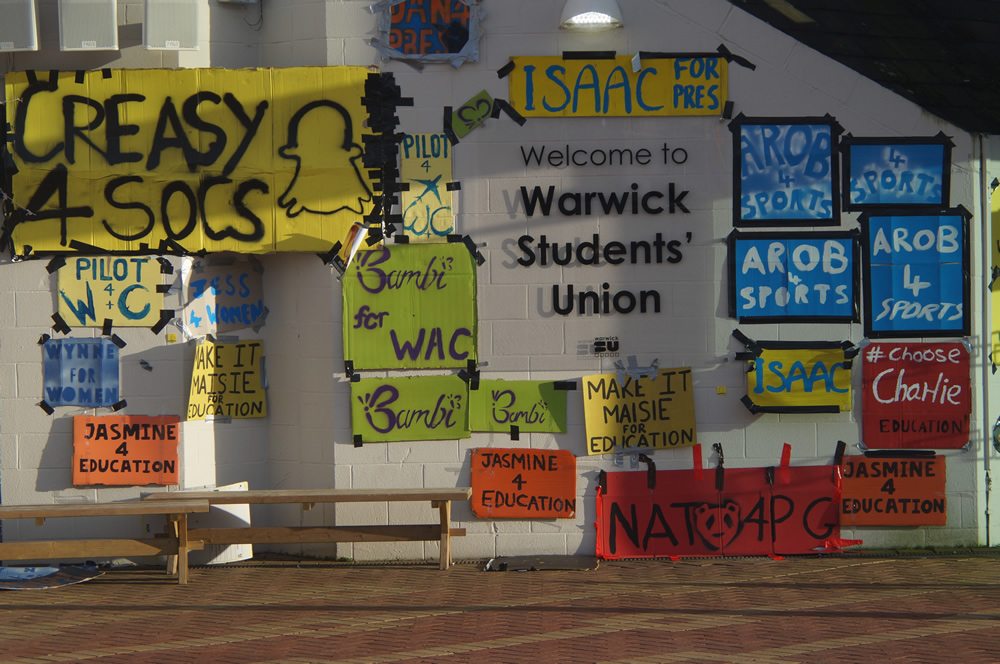 Voting has closed and results have been announced. Read our report here.

Candidates for president, democracy and development officer, postgraduate officer, education officer, societies officer, welfare and campaigns officer and sports officer were questioned (click to jump to section). The event had each candidate give a two-minute campaign speech before answering questions submitted and questions from the floor.

There was an average turnout of 38 throughout both evenings.

Mr King and Mr Dodd focused on the idea of building positive bridges; Mr Goss and Mr Leigh focused on ways to deal with the vice-chancellor.

All four prioritised issues of transport – particularly the bus system – as well as a fairer living cost on campus. There was also focus on making sure that Warwick students engaged in SU politics and that they are heard.

“I want to tackle the current bus situation by offering a refund for students whose busies are over 50min late.” @IsaacLeigh

“I want to mobilise the SU because it is an inherently political device and I think we should utilise that.” @gosspol — Boar Live (@BoarLive) February 24, 2015

“I think it’s really important students are given a fair deal across campus..justifying costs where they have increased.” @AndrewEKing

In their opening speeches, Mr Sobral revealed his priority in making democracy easier to get involved with by creating an online forum; Ms Bergstrom also stressed her priority in getting students involved in policy-making; Mr Rice focused on the cost of campus accommodation; and Mr Diamond wanted to make international students feel more at home with international cultural events.

Student engagement in Union democracy were one of the issues raised. Mr Rice prioritised making Student Council meetings more accessible, as did Ms Bergstrom. Mr Diamond suggested that if the Union made society budgets more transparent, students would become more interested in the politics behind it. Mr Sobral reinstated his policy for an online forum.

The three focused on specific postgraduate issues: the housing crisis at the start of the year (unlike undergraduates, postgraduates are not promised accommodation either on- or off- campus), postgraduate funding, helping postgraduates with mental health issues, and reaching out to international postgraduate students.

All three were eager to create an environment where postgraduates are made to feel welcome.

“We need recorded lectures. For postgrad students the level of lectures is high, this is why it is one of my main policies.” Prisca Wharton — Boar Live (@BoarLive) February 24, 2015

The candidates for Education Officer were Maisie Hallam, Charlie Hindhaugh and Jasmine Jones. Mr Hindhaugh gave his proposed ‘Rate My Module’ website, online submission and feedback for all assessments and welfare stand in the library as the top reasons that students should vote for him. Ms Hallam outlined a seven-point plan to improve education at Warwick. Meanwhile, Ms Jones stressed the importance of ensuring good quality feedback, a 24-hour library, and expanding the Open Education series.

Questions to candidates focused on fees, accessibility to higher education, feedback, and student participation and representation at Warwick, particularly of minority groups.

In response to questions from current education officer Maahwish Mirza, all candidates promised to continue to address issues of discrimination if elected.

On undergraduate tuition fees, Ms Hallam said the most important thing is giving students value for money under the current system. Mr Hindhaugh however argued that the undergraduate fees system is unsustainable and he would prioritise campaigning for an increase in higher education funding. He also wants to see international tuition fees capped, as does Ms Jones. Ms Jones added that the high tuition fees discouraged students from going to university. All the candidates promised to campaign against the new fees introduced for Warwick students going on Erasmus.

Maisie Hallam – @MakeItMaisie “I think that the uni should not be focusing on the fees but what we get for those fees” — Boar Live (@BoarLive) February 23, 2015

“Making sure no matter who you are you can get to University. It’s financial, it’s getting to campus, accessing the library” @Charlie4Edu — Boar Live (@BoarLive) February 23, 2015

“I campaigned against Islamophobia and I will continue to do that.” Jasmine Jones – @jas4edu — Boar Live (@BoarLive) February 23, 2015

Candidates for societies officer were George Creasy, Aaron George, Emi Meakin and Jesal Sheta. The opening speeches of the candidates addressed issues such as the acquisition of sponsorship, particularly for smaller societies, the development of a societies calendar to synchronise society events, and the improvement of the societies webpage.

Questions taken from the floor were concerned with the organisation of the resources room for societies, the societies federation fee and the frequency of socials that do not involve drinking alcohol.

Aaron George – @zuniva “I want to make events calendars for all the societies so everyone can see what’s going on” — Boar Live (@BoarLive) February 23, 2015

“I want to meet all society presidents so I can solve and sort out all problems” @sociohistorian — Boar Live (@BoarLive) February 23, 2015

Running for welfare and campaigns officer are Sam Parr, Bambi (aka Brogan Pierce) and Luke Pilot.

Mr Pilot wanted to encourage students to have an impact in the local community and internationally.  He identified mental health as the most important issue saying he would push for training for personal tutors and better support services.

With regard to housing problems, Mr Parr argued that the current Housing Days are at inaccessible times and wanted to change that; Ms Pierce proposed that the SU make stronger links with letting agencies; and Mr Pilot said a big issue was lack of consistency across different estate agents and proposed working on a code of conduct.

“Some of my biggest priorities are welfare sessions in libraries, training personal tutors to deal with problems” @broganrose94 — Boar Live (@BoarLive) February 23, 2015

Sam Parr: “There’s not a lot of support if you’re in leamington and can’t make it to campus… we need welfare provision there” — Boar Live (@BoarLive) February 23, 2015

Alex Roberts was the only candidate for the role of sports officer. Mr Roberts pledged to enhance Warwick’s already positive sporting reputation. He presented the idea of a sports science degree at Warwick and a varsity showcase during term one.

Questions posed to Roberts involved whether more alcohol awareness was needed among sports societies, what could be done to improve the provision of sports for the disabled and whether a sports science degree should be introduced at Warwick.

“If you bring in a sports science degree, you go way up in the league tables.” Alex Roberts – @ARobforSports — Boar Live (@BoarLive) February 23, 2015

“Universities like Bath have such degrees. It makes the uni more sport focused and it will improve our standings in sport” @ARobforSports — Boar Live (@BoarLive) February 23, 2015