ASM: Students have no confidence in Thrift

Results of the Term 2 All Student Meeting (ASM) reveal that the Students’ Union (SU) will officially have no confidence in vice-chancellor Nigel Thrift. Meanwhile, the Water without Politics motion, which discussed the University’s water supplier, was withdrawn.

The motions of the ASM were discussed on February 2 at the Atrium. Voting took place online from Tuesday 3 until Thursday 5 of February. A total of 1,338 students voted in the polls.

The voting results of the All Student Meeting poll. Photo: Ann Yip

The SU stated that as a result of the policy being passed by vote, “Warwick Students’ Union now adopts the motion ‘No Confidence in Nigel Thrift’ as policy”.

Reasons for no confidence in the vice-chancellor have been attributed to the staff pay dispute, controversy in Prof Thrift’s pay and pay-rise, the violence at Senate House and the alleged failure of the University the justify the police brutality, the suspension of Thomas Docherty and the potential redundancies at the Medical School and the Life Sciences.

The Boar has revealed that Warwick University paid its vice-chancellor the tenth highest salary of 23 Russell Group universities. It has also paid Prof Thrift the fifth highest pay-rise in the last two years.

The University has responded: “The University is aware of and notes that 682 students have voted in favour of a motion of no confidence in the vice-chancellor. Having groups of students who actively disagree with the leadership of a university has been a feature of a great many UK universities for more than 70 years and this is one way they have of expressing that disagreement.”

Water without politics
The motion ‘Water without Politics’ which drew heated debate at the meeting was withdrawn from the ASM. The motion drew interest with the Israeli-Palestine conflict as it was said that the University’s water supplier was an Israeli company extracting water from Palestine.

In an online statement, the SU said that the withdrawal was due to “new information which came to light after the polls had opened”.

the motion had to be withdrawn as it came to light that Eden Springs is not an Israeli-owned company
Rob Ankcorn, democracy and development officer

Rob Ankcorn, democracy and development officer, told the Boar: “the motion had to be withdrawn as it came to light that Eden Springs is not an Israeli-owned company. If the motion had passed and the University ended their contract with Eden Springs, then the SU could be sued for damages on account of misrepresentation.”

Security code of conduct, 24-hour library
Following the violence at Senate House, there was also a motion calling for the University’s security services to be subject to a code of conduct. 73 percent (803) voted in favour of the motion with 11 percent (122) against and 16 percent (178) abstaining.
The motion involves SU president Cat Turhan and welfare and campaigns officer Bebe Husakova lobbying with campus security to produce a code of conduct that is publicly available online.

ASM: No Confidence in Thrift and other motions 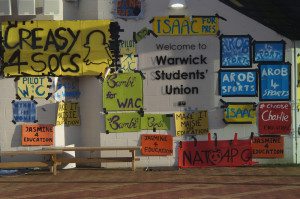