The best episodes of Christmas Past 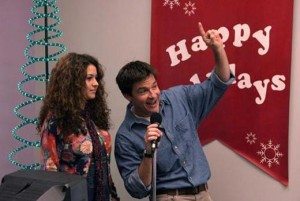 Arrested Development wasn’t a typical American sitcom- the show’s cult status may have stemmed from its elaborate call backs, hidden gags and dark family dynamics, but its assets also led to the alienation of a wider mainstream audience and its eventual cancellation. To that end, ‘Afternoon Delight’ is not your standard Yuletide fare. To celebrate the holiday season, Arrested Development cranks the dysfunction levels up to “festive”; the wealthy but narcissistic Bluth family hold what has to be the most uncomfortable office Christmas party of all time, with each family member attempting (and failing) to manipulate their loved ones for their own selfish gains, at the expense of their terrified workforce. An instalment that culminates in numerous car accidents, drug abuse, and not one but two horrifyingly incestuous karaoke duets certainly doesn’t sound like an ideal Christmas episode. However, it’s one of the greatest episodes of Arrested Development ever made, featuring some of its most quotable lines (“These are my awards, mother. From Army.”) and finest performances. ‘Afternoon Delight’ exemplifies the show’s complete refusal to pander to a mainstream audience, even when it’s in its own interests to do so, much like the Bluths themselves.

At the San Francisco police department Christmas party, an officer dies after drinking poisoned port intended for Captain Stottlemeyer. The captain searches for a released felon who had shot at him months before, and in order to find him, Monk is forced to go undercover – as Santa Claus. This is a typical episode of Monk, one of the best shows of all time, mixing a solid murder mystery with moments of humour and a wonderful performance by Tony Shalhoub as the OCD-stricken detective, but with added touches of sentiment that you’d only find in a Christmas episode – in between investigating the crime, time is also found to reunite a family and help a little girl experience her first white Christmas. Despite his Scrooge-like nature, Monk has had a number of adventures at Christmas – meeting his dad and joining him on a trucking job, fighting for public support after shooting a criminal dressed as Santa, investigating a fountain that can cure all illness – but this was the original and the best of the bunch. If you see it on this Christmas, do give it a go.

Community has a slew of great holiday themed episodes, as well as plenty of ‘gimmick’ episodes that experimented with other genres before it, but “Abed’s Uncontrollable Christmas” is a special case, not just for its shift of focus from comedy to some fairly heavy emotional drama, but for its use of stop-motion animation for the entire episode. This is not to say the episode isn’t funny; the show manages to get as much humour as it can out of the format (see: Jeff’s giant forehead). Using the unique opportunity to let Abed’s imagination run rampant, the episode being mostly set in a ‘Winter Wonderland’ that Abed essentially creates as he goes along, even morphing the study group into Christmas forms that displays what Abed thinks of each member of the study group (for example: Annie is a toy ballerina as she’s ‘fragile’ and ‘tightly wound’). The sentimentality of the episode might be off-putting to some, but if first time viewers don’t find the change too jarring, it’s a bold and brilliant piece of television.

Nothing says “Merry Christmas!” like post-traumatic stress disorder. Far be it from engaging in upbeat holiday festivities, most of Aaron Sorkin’s Christmas episodes during his run as head writer on The West Wing were rather serious affairs. Season 3 saw Chief of Staff Leo McGarry (John Spencer) crying at his desk after being rescued from a grand jury, and Season 4 saw the already grumpy communications director Toby Ziegler (Richard Schiff) dealing with his complicated daddy issues. But Season 2’s “Noël” takes the cake, as it focuses on Deputy Chief of Staff Josh Lyman’s (Bradley Whitford) visits to a psychiatrist to treat the emotional breakdown he’s been having after being shot at the end of Season 1. In flashbacks we see the normally upbeat and jovial Josh turn mean, yelling at his co-workers over nothing (including the President) and unable to understand why brass instruments are pissing him off so much. It’s notable not only for winning Whitford an Emmy, but also for John Spencer’s delivery of one of the best speeches ever written for television (“This guy’s walking down a street, when he falls in a hole…”). I’ll take it over Charlie Brown any day.